Travel is the Traveler 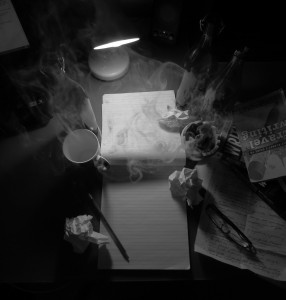 Travel is the Traveler

The guidebooks warn about this treacherous, hardscrabble path. “The travel-writing trail is long,” one says, solemnly. “It can be extremely demanding and daunting…lonely, exhausting, and depressing.” But here, I’m undaunted and uninhibited, quickened by a private fire, and the warnings only fan my ardor as I survey the vexing terrain.

The path to My Notepad traverses the flatland of the Writing Desk, stretching out to the north of an amorphous formation of laundry. The Library, a mountainous ridge of musty, dog-eared peaks rising and falling like a cardiogram, plummets steeply into a valley formed by a friend borrowing “Road to Oxiana.” There are ruins and curios abandoned by the area’s nomadic people scattered around this fertile plain: crinkled, incomprehensible road maps; guided-tour brochures; a mahogany backgammon board, inlaid with pearl, Turkish in origin; a Nepalese gurkha with a dragon etched into its blade; a mosaic of blue, pocket-sized, hardcover notebooks where half-deciphered hieroglyphics have been scrawled.

I linger in the ruins inhaling their memories, then head for the Wine Bottles densely foresting the northwest. The transparent sea green of their print-smudged trunks indicates the sap – a cheap, saccharine Shiraz thought by the locals to induce creativity, courage, and charm – has already been tapped by indigenous persons.

Discouraged, I press onward. Sweat stings my eyes; dryness parches my throat. The air is thick with acrid haze from The Ashtray’s nightly fires. And there, in a clearing, abutted by Coffee Mugs, lies the Indonesian-made, Sinar Legal Pad – it’s sulfur-yellow surface unfolding before me with ominous invitation.

Nearby, blunted pencil stubs, gnawed by teeth marks, rest on their sides like derelict ships. Strange flora surround the shores: the curling, withered petals suggest a common species of Scriptus Excrementae, or “crumpled waste papers.” According to regional mythology, these poisonous flowers bloom after failed attempts to cross the pad’s surface. The muscles in my gut tighten; my mind seems a desiccated husk. Maybe a day trip to The Bed for a nap would be better?

No, I mustn’t. Again, I consult the guidebooks – “The Art & Craft of Writing,” “Writing for Story,” “The Guide to Travel Writing” – hoping to glean a spark of courage from trailblazers. It’s growing late. I came to challenge The Notepad and its unpredictable surface – sometimes sluggish as wet concrete, sometimes unwieldy as torrential rapids – but I haven’t yet dared to venture out. A circle of light falls from a 120-watt General Electric© moon on the beckoning blankness. Drums pound demonically; a voice yelps like a wild animal. The rhythms of a local tribe, The Rolling Stones, explode from the ancient chambers of a Panasonic tower. My blood thrums excitedly. I clutch my vessel – a #2 HB Faber-Cassel – in a frenzied, reckless fit and dash to the right, directly into the current.

It’s hard-going at first: I slip on spelling; fumble with tenses. But soon I’m on “a Hearts & Tears motorcycle zipping through the winding, badly-pav​ed roads of Sarangkot in the Pokhara Valley, on my way to paraglide through gauzy, golden light with a thermal-seeking Egyptian vulture recovered from captivity…”

I lose direction in a thicket of purple prose, so I head for the Hiber Hotel bar in Addis Ababa where “slender, tired-eyed waitresses serve steaming plates of spicy lega tibs and overpriced old fashioneds as we fidget at our table under a swinging blue light, waiting for Impression to emerge and, after halfhearted apologies, launch into a nervous rendition of “Autumn Leaves”…”

The neighboring tribe from Porlock bellows a warning in their vulgar, unprintable dialect to keep the music down. I falter slightly; my concentration slips. But I deftly stabilize and breeze into Trieste, to the “Caffe degli Specchi in the Piazza dell’Unita where, while sipping an aromatic cup of Illy (“Un po’ di zucchero, per favore. Grazie!”), two well-dressed men discussing politics in Triestini cover their heads with today’s edition of Il Piccolo and duck, cursing, under the awning to escape a sudden shower that’s arrived from over the Slovenian karst…”

I fall back exhausted, breathless, exhilarated from the uncharted, furious passage. I’ll have to remake the journey in the morning so I survey my path carefully, now approvingly, now regrettably.

I recognize Fernando, an inhabitant of the northern tomes, alone in the now-quiet night. He calls to me. Diaphanous light pools in his circular lenses; he sips coffee through an elegant triangular mustache.

“Travel?” Senhor Pessoa says, “One only need exist to travel.”

He nods. “What more do I do when I travel? Only extreme poverty of the imagination justifies having to travel to feel. It is in us that the scenery is scenic.”

I smile, dreaming over Beijings and Madrids unspooling upon My Notepad tomorrow.
______________

About the Author: Adrian DeVuono is an award-winning scholar of comparative world literatures, an amateur boxer, and a new member of the travel, and travel-writing, community. Adrian recently completed his Master’s thesis on censorship in American Literature and is currently a student of MatadorU network and on Facebook.

One response to “Travel is the Traveler”