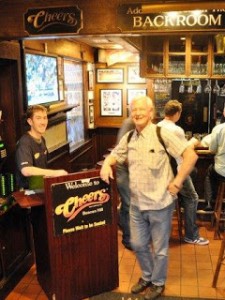 On Valentine’s Day, 2011 I took my oath as a US citizen at the young age of 62. My husband Bill and I were in our second year of RVing across North America. We have the freedom to be where we want to be, do what we want to do. As we were going up the US’ eastern coast, I grew anxious to reach Boston. American History was one of my subjects at the American School in the Philippines where I was awarded a 6-year HS scholarship in 1961. I had a feeling I will get my most intense American education in Boston.

We drove our car from the Gateway to Cape Cod RV Resort, parked at Braintree, thirty miles south of Boston, and rode the Red Line to avoid the city’s infamous traffic jams and high parking prices. We got off at Park Street Station on Beacon Hill and decided to use the Hop-on Hop-off bus service to cover the 2.5 mile Boston Freedom Trail, the unique collection of historic sites.

Unfortunately, the Boston Tea Party ship/museum at Stop #9 was closed for renovation. The story goes that the British government and the East India Company controlled all the tea imported into the colonies. On December 16, 1773, Boston officials refused to return three shiploads to Britain. Colonists sneaked into the ship and threw the tea into Boston Harbor. The British Parliament ordered Boston’s commerce closed until the Company could be repaid. Colonists retaliated by convening the First Continental Congress in Philadelphia. In 1775 the war began. 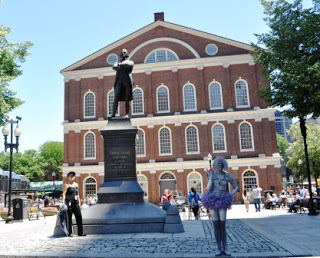 Stop #1 is a close look at Faneuil Hall, a meeting hall since 1742, and the Quincy Marketplace. Stirring speeches by Samuel Adams and others calling for independence from Great Britain had been regularly delivered there. Quincy Market is now a bustling place for diverse eateries. I had my Asian rolls while Bill had his pizza!

Paul Revere’s home and the Old North Church are at Stop #2. Revere was a silversmith who alerted Colonial militia in Lexington and Concord, just outside of Boston, of approaching British forces. The signal “One if by land and two if by sea” is said to have been sent via lanterns from the Old North Church midnight of April 18, 1775. The British were forced to go back to Boston.

Stop #3 is the Bunker Hill Monument atop Breed’s Hill where the Battle of Bunker Hill actually took place On June 17, 1775 it became the first major conflict between British and Patriot forces. The Patriots won! The 221 foot granite obelisk has 294 steps and In front is a statue of Col. William Prescott who coined the phrase, “Don’t fire until you see the whites of their eyes”. 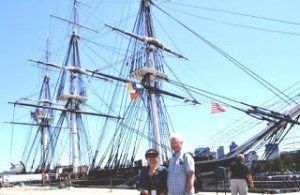 The USS Constitution fondly called ‘Old Ironsides is at Stop # 4 at the Charlestown Navy Shipyard. Still an active frigate of the US Navy, she is the world’s oldest commissioned naval vessel afloat (since 1797). Although she was the third out of six constructed after the 1794 Naval Act, she is known for being undefeated during the War of 1812, an unsuccessful attempt by Great Britain to reconquer the USA.

Stop #5 is the site of the Boston Massacre. British troops had been stationed in Boston since 1768 to protect its officials who were enforcing unpopular laws. On March 5, 1770 a mob subjected a British sentry to verbal abuse and harassment. Eight additional soldiers came to his aid. They fired into the crowd, without orders, instantly killing three and causing the death of two others later, foreshadowing the American Revolution 5 years later.

The Old Granary Burying Ground near Park Street Church, Stop #6, is where Paul Revere, Sam Adams, John Hancock, and members of the Franklin family are buried. Though already closed, we were still able to take pictures from the sidewalk. Stop # 7, the King’s Chapel and burying ground, and Stop #8, the Copp’s Hill Burying Ground, were also closed. 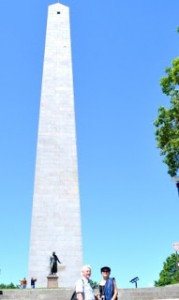 That gave us some time to enjoy the Boston Commons on Beacon Hill. There was a carousel, a beautiful pond, a Civil War memorial, and a quaint fountain from which one can see the gleaming gold dome of the Massachusetts State House. Just opposite the Commons, at the end of the ‘walk’, we did just what we wanted to do. Bill had refreshing beer and I had iced tea at Cheers, the pub that was the home of the popular TV series!

Just like at Cheers, I had a taste of it in high school. But now I have the freedom to roam around the vastness of America, the beautiful, enjoying its early heroes’ genius and sacrifice with an American husband by my side. After all, I am now an American!

About the Author: After stints as CEO of Philippine pioneers in information technology, Carol migrated to the US to take care of grandkids, become a business counselor in SCORE, and serve as adjunct professor in three schools of higher learning in Seattle. Soon after she married Bill in 2008, they started and recently completed a 4-year cruise of North America in an RV which is written about in a blog . Carol has a BS in Math, an MBA, and a DPA abd from the University of the Philippines. 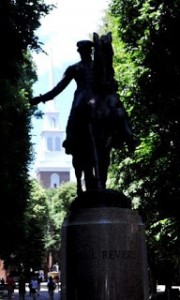 Oxfam-Quebec 20th International Contest Featuring Toys Made from Reused Materials
USA Today 10best Readers Choice Awards: Vote for your favorite fishing charter or tour in North Amer...
#LiveUnfiltered: Social Media is not the Enemy
Are You Looking for Luxury at the Next Level in Las Vegas?