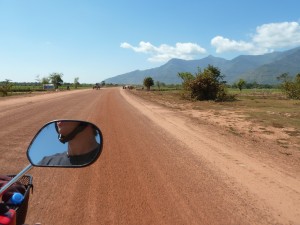 The road wound for miles in front of us. I could see the shadow of the bike and its two riders stretching out on the road next to us. Something came into view ahead, at first just a blurry shape, slowly coming into solid form. A lonely cow ambled towards us, and we adeptly maneuvered slowly around her. We overtook a tractor-pulled cart full of workers on their way to work. They passed from our line of sight, into our side mirrors, and then slowly behind the horizon behind us. We were alone on the road again.

We had been on the road for a while now, travelling through all that Asia had to offer. I’d like to have said that we were fairly seasoned travellers by the time we reached Laos, though looking back on it now, that wasn’t strictly true.

It was fairly late in the evening when a Scottish couple joined us on the single table out on the small open space serving as a balcony in a nondescript hostel in Pakse. We quickly struck up a conversation about our travels so far, they had been to Cambodia, our next destination, and we to Thailand, their next country, so we eagerly exchanged tips, advice and experiences.

We’d only been talking for a couple of hours, but they soon convinced us to join them on their motorbike trip planned for the next day, we’d wanted to go to the same places, but were a little reluctant to ride bikes after our last experience in India ended in a painful mishap.

The next three days are still my favourite memories of Laos.

Southern Laos is vastly unexplored by travellers, the government is anticipating an influx of tourists, as has happened in the North, so the infrastructure is being prepared, but as yet there isn’t much evidence of anyone really using it. This provided miles and miles of open road, with no one and nothing on it. Save for four people on two bikes.

There’s something that makes me inherently happy about seeing other people’s lives and everyday goings on. We cruised through lush paddy fields, with backdrops of majestic mountains rising out of the ground on the horizon. Occasionally a small wooden house would creep up to the road, and the houses are on stilts because of the flooding of rice fields. We passed women in the fields, water up to their knees, hunched over in the fields, sowing or inspecting the crops. They didn’t take a blind bit of notice of us. We were looking for Tad Fan, a 120 metre high waterfall that we’d heard great things about.

Tad Fan is not where we ended up.

We parked our bikes and paid the fares to the dubious looking guy who just happened to be sitting in the bike park – did he actually work here or was he just happy to take money from strangers. Who knows? Leaving the bikes to fate, and following the vague signage that seemed to be pointing in the middle of a field, we followed the track down the hill, some rickety old steps, and over some unsteady stepping stones in the river.

We definitely weren’t at Tad Fan. We were at a considerably smaller waterfall, about 20 metres high, which descended almost noiselessly into a wide, deep pool. The whole area was surrounded by woodland, which meant that the light that did get through to us was bouncing off the water in the pool, and off the waterfall itself. The whole area was bathed in light and had a real ethereal feel about it, as if the waterfall Gods were shining on us. This was helped in part by the fact that we were the only people there. The whole area was silent apart from the rustle of the trees and the splashes we made as we waded into the pool and swam across and under the watery curtain.

Eventually someone else did pop our blissful private bubble, and we dried off and headed for the real Tad Fan, which was actually a little disappointing after our otherworldly experience just across the road. Turns out we’d taken a left, when we should have gone right.
It was a pretty good wrong turn.

About the Author: Laura is a teacher and traveller, sometimes both at the same time. Her favourite things are eating, cooking, reading, and kittens. You can find more of her stories at www.travelthelongwayround.com .