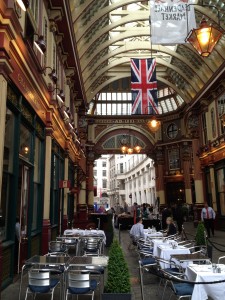 Mind the Gap: The Transition to Independent Travel

There is a restricting uneasiness with terra incognita that ails any traveler venturing abroad for the first time. I was no exception. Before boarding the plane to London, I had a plethora of wrong assumptions, stereotypes and nightmarish fears that plagued me during the turbulent plane ride.

I had even convinced myself somehow that Customs comprised not only a full patting down, including a detailed dissection of the contents in my suitcase and my carry-on, but also a health exam complete with temperature readings to ensure that I was not bringing any disease into the country. I had stashed my protein bar in the secret pocket of my purse believing that if they found any food I had carried in, they would immediately confiscate it. I was shocked when only a few questions and an identification check earned a stamp for my passport and an ‘okay’ to go explore England.

I had made the voyage with a group of students from my college and our intentions were to study theater, or rather theatre, as it compared to what we are exposed to in America. Yet from day one, our professors urged us to invest in the opportunity to learn a greater lesson: how to travel alone. 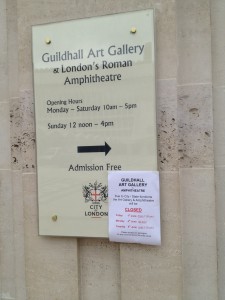 I practically laughed at this suggestion at first. How could I possibly manage to find my way around in a foreign city alone? Never before had I independently explored an American city. Growing up in the suburbs, I couldn’t even begin to understand how to maneuver in a city. There was also the unnerving detail that I had no cell phone service abroad. If I set out on my own, I was truly on my own.

So for the first few days, I stuck with the group. But, it didn’t take me long to figure out that while it was nice to have the comfort of friends when exploring, it was often difficult to agree on a plan of action.

I found that a good portion of the time was spent hovering over maps and flipping through guidebooks searching for places to go and things to do that would suit everybody’s interests. Meals were the worst. Nobody seemed to share the same taste in food and so finding a restaurant that we could all agree on was next to impossible. This was not how I wanted to spend my time in London.

I wanted to see things, do things, and discover things. I was tired of planning things and disagreeing on things. So, one fine day, I summoned up all the courage I could muster, took my professor’s advice and jumped on the Tube solo with no plan, no phone, and absolutely no boundaries.

I quickly learned that the Tube is actually a nervous traveler’s friend. Not only is it very simple to decipher, but it is easy to locate a nearby station in case you get lost. In that situation, all you need to do is open a subway map, find where you need to go and follow the color-coded lines to your destination. I ended up getting off at Bank that day and decided to try to locate the Guildhall Art Gallery. When I arrived, however, there was a small sign on the door that stated in red letters that the building was closed for the remainder of the day, and inevitably the remainder of our time in London. But, this did not discourage me. Using the street signs that were located on each street corner, I looked for the most interesting thing, which happened to be Leadenhall Market where Diagon Alley was filmed, and took off in that direction. I was invigorated by the complete freedom I now had. I could go at my own pace, I could take pictures when and where I wanted and I could spend as much time shopping around Leadenhall Market as I pleased without feeling rushed. 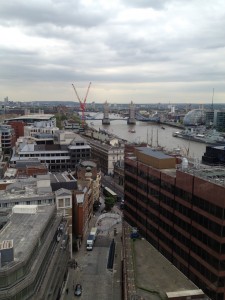 That day I ended up making many discoveries. I discovered that I could climb up the 311 steps of the Monument, take a peaceful walk along the river Thames, cross the beautiful Millennium Bridge, get a nice view of Damien Hirst’s crystal skull on exhibit in the Tate Modern, stand beneath the glorious St. Paul’s Cathedral and then take the Tube back to Covent Garden and happen upon some free ice cream all in just four hours. I discovered the charm of London. With such varying architecture from Shakespeare’s Globe to the Tate Modern to St. Paul’s Cathedral, it is one giant time capsule, with the best bits and pieces of each time period preserved and arranged all in one place. But most importantly, I discovered that I could manage on my own in a foreign country and doing so had completely liberated me.

About the Author: Shannon Fitzgerald is a rising senior at Allegheny College pursuing a career in the literary field. She is from a small, snowy town south of Buffalo and just a short drive away from Niagara Falls. Traveling has been an important part of her life since her parents first took her on a trip to Disney World at the age of four. Find her on Facebook.