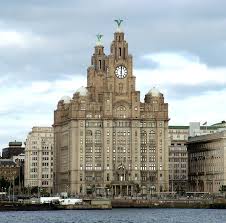 When people think of Liverpool, they probably think of football, the Beatles and the iconic emblem that represents some of the city’s most enduring mythology, the Liver birds! Visitors to the city are likely to spot the instantly recognisable birds almost immediately if they enter via one of the two tunnels that cross from the Wirral Peninsula, as they would soon drive within sight of the building that is home or ‘roost’ to the birds: the Liver Building.

One of the ‘Three Graces’, along with the Cunard Building and the Port of Liverpool Building, that make up the most recognisable part of Liverpool’s UNESCO World Heritage site waterfront, the Grade I listed Liver Building was erected in 1911 and has always been home to the Royal Liver Assurance company. The famous birds are said to have been modelled on the cormorant, although they have been highly stylised, and they are positioned so that one sits looking towards the River Mersey while the other faces inward, watching over the city. Local mythology states that Liverpool will fall if the birds should ever fly away.

The imposing, thirteen-storey building was constructed using reinforced concrete, an innovation at the time of its construction, and at 300 feet was the tallest building of its kind in Europe until the 1930s and remained the tallest building in the UK until 1961. However, it is no longer even the tallest building on Liverpool’s waterfront. The enormous clocks on one of the Liver Building’s towers are larger than Big Ben and are scrupulously maintained, allowing passing ships – or ferries – as well as those inland to keep track of the time. As the clocks were started at the moment that King George V was crowned, they were once known as ‘George’ clocks and the electronic chimes now associated with them were added later as a tribute to Royal Liver workers who had been casualties of the World Wars. 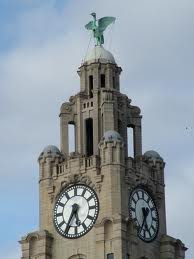 Although it’s not possible to tour the building as it is still a working environment with several floors of offices, it’s something of a ‘must-see’ destination for tourists, who can combine a trip to the Pier Head with some leisurely bargain-hunting in the nearby Liverpool One shopping centre. The area directly in front of the buildings is a good site for a picnic or somewhere just to sit and enjoy a coffee from a local shop, as it is beautifully maintained and has plenty of benches from which to survey the impressive architecture, a number of pieces of public sculpture and the vision of the river and the picturesque shoreline opposite. Arguably, the best view of the Three Graces is to be seen from the river itself, which can be managed by hopping on board one of the Mersey Ferries. For the price of the trip to the Wirral and back, you get a potted lecture on the history of the ferries and a trip down memory lane as the strains of Gerry Marsden’s ‘Ferry Cross the Mersey’ helps passengers to alight.

Although the Three Graces, Liverpool One and many other attractions, such as the Albert Dock, Tate Liverpool and the Museum of Liverpool are all relatively close to one another, surrounding The Strand, with plenty of safe, affordable parking in the area, it’s definitely better to drive. Many great tourist destinations are further afield, including both football grounds, sites of interest to Beatles Fans, such as Penny Lane or the Beatles’ childhood homes and several beautiful Victorian parks.

About the Author: Tim Banks loves travelling around the Europe. He works in a full time accountant role and knows how to take time out (of his annual holidays) to really explore the highlands and much more of what Europe has to offer.