Thelma and Louise in England 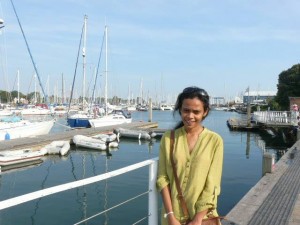 Thelma and Louise in England

Dimuthu and I hit the road. We were Thelma and Louise without the murdering and thieving. Dimuthu was my Sri Lankan sister, my twin. We shared a birthday, but she was young and pretty while I was past my best. We came from places half a world apart, yet we were kindred spirits.

Dimuthu and I had a plan: we’d take the motor-ways to the south coast.
In a Peak District pub, Dimuthu posed by the beer pumps for photos. She marvelled at the polished oak bar and the women who went out drinking without husbands. And I looked at the pub as if I’d never seen one before. At Chatsworth Dimuthu rubbed noses with a bronzed Queen and Prince Charles and we giggled. We climbed trees and got lost in the maze. “This is fun,” Dimuthu said.

“Let’s go to London,” I said. Dimuthu got out her i-pad out and directed us south. “So many cars,” she said, “driving so fast!” I looked out and saw what Dimuthu meant. In Kandy the roads were slow and no one was in a hurry.

Abandoning the car, we took the underground into London. Dimuthu examined the sliding doors, the ticket machines and the electric cables. “There’s nothing like this in Sri Lanka. How does it all work?” And I viewed the tube with new curiously.
On the Thames as we cruised under Tower Bridge Dimuthu said, “I can feel a shiver going down my spine” and I knew how she felt.

Heading out of London, Dimuthu exclaimed at the slow dusk, a gentle fading out. “The day lasts so long here. It’s confusing!” And I remembered the night dropping like a black curtain in Sri Lanka around six.

We ate toast on the hop and grabbed burgers in service stations. In Sri Lanka the women had got up at 3am to prepare curry and rice for the road.
In Lymington we at ninety-nines and watched kids on the pier chasing crabs that had escaped from their toppled bucket. At Sandbanks we loaded the car onto the ferry. “Wow. I’ve done so many things for the first time in England,” Dimuthu said.

We parked up and walked along the beach, nosing into beach huts crammed with kettles and hanging mugs, buckets and spades and fishing nets. We spread our tartan blanket by the water’s edge, ate sandy sandwiches and drank stale tea from a flask. I saw England’s foreignness through Dimuthu’s eyes.

Dimuthu dipped her toes in the Channel and shivered. “It’s freezing!”
“Want to go further out in the sea?” “Want to go for a pedal?” I grinned, knowing Dimuthu couldn’t swim or cycle. We hired a pedalo and set out towards the red, white and blue smoke of the Red Arrows as they looped-the-loop over Bournemouth. “Cool,” said Dimuthu. And Britannia did indeed seem cool through Dimuthu’s eyes. Thelma and Louise could never have had so much fun in the US – of that I was sure.

About the Author:
Helen Moat spent her childhood squished between siblings in her Dad’s Morris Minor, travelling the length and breadth of Ireland. She’s still wandering. Helen was runner-up in 2011 British Guild of Travel Writers Competition and was highly commended in the BBC Wildlife Travel Writing Competition in 2013.