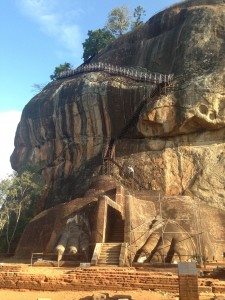 “I am the Queen” giggled the middle aged Japanese lady as we stopped for her to sweep past us, borne aloft by her two Sri Lankan guides. We watched with envy as, cool and calm, she ascended the steep metal staircase with her feet making walking motions while several centimetres above the steps. Firmly gripped under each arm she was being propelled up in regal fashion.

Hot and sweaty we continued to mount the iron rungs slowly, pausing every now and then to get our breath and have a sip of water. We had 750 steps to climb, with little shelter from a vicious sun but we were determined to reach the top of Sigiriya, a russet red volcanic rock in the heart of Sri Lanka. A UNESCO heritage site Sigiriya or Lion Mountain has the remains of a 5th century fortified palace built by King Kasyapa at the top of its 370 metre climb. As a keen historian I was determined to get there.

Fortunately for us the climb was broken up into manageable chunks with occasional stretches of flat. A third of the way up we stopped to admire the beautiful frescoes of women with flowers in their hair painted on the rock face in the Mirror Wall. The shade here was a welcome respite.

Up again, this time by way of a caged metal spiral staircase hanging off the side of the rock. Glancing up while on it gave me a horrible sensation of being in mid-air. I gritted my teeth, continued on and was glad when I was back on firm ground once more.

By now we’d reached a large flat area of rock where a pair of enormous lion’s paws appeared to be cradling the staircase leading to the peak of Sigiriya. This was Lion’s Gate, the entrance to the palace. We took advantage of the break to rally for the final climb before pressing on.

We were only a few steps up when the group in front paused and a panicky conversation took place between them and their guide. We moved forward and were stopped by frantic gesticulating and repetition by the guide of the word ‘bees’. There was a swarm of deadly wasps ahead and it was too risky for those on top to come down, or for us to continue going up. We retraced our steps to Lion’s Gate and, looking up, could see the swarm hovering near the side of the rock. Time ticked by and we were beginning to despair of ever being able to attempt this part of the climb when the wasps appeared to fly off.

I gave an inward cheer as a small group of plucky tourists began to descend now the danger had passed. A moment later and we were off up on our last leg to the top. This part was the most hair-raising of all. Affixed to the side of the rock the stairs were metal, hot and very narrow. Even more worrying the staircase was undergoing maintenance while we used it. A sign at the bottom warned us to be careful and as we climbed up we had to step over a man using a drill to affix one of the steps more securely to the rock. By now we were so near our goal we would probably have crawled up the remainder but even so I did feel a flurry of hastily suppressed concern.

A few more steps and we were there! With the last step we reached the flat rock top and could see the remains of the palace. It was huge, much bigger than I’d imagined and with clearly definable foundations still visible. As well as the palace, conquering the peak gave us a bird’s eye view of Sigiriya’s historic gardens spreading out from the rock into the surrounding countryside. Grateful to have made it we wandered around wondering how King Kasyapa, his family and courtiers accessed the palace and applauding their ingenuity in building on such a beautiful site.

And what about our queen? She’d been and gone, no doubt with scarcely a bead of sweat or a hair out of place, but I was glad we’d done it our way.

About the Author: Clare Gleeson is a New Zealand historian, librarian and travel writer who enjoys exploring her own country as well as those further afield. She has a travel blog at www.thewanderinghistorian.com

Sri Lanka: To Go or Not To Go?
Alight in Thailand
Graceful in New York City: #ShareHumanity
What The Kumbha Mela Taught Me