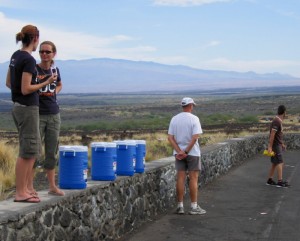 There I was out in the moonscape that is the lava fields on the leeward side of the big island of Hawaii. The hot wind was pushing my bicycle slightly sideways and my knuckles were turning white having to grip the handlebars. Riding out of the saddle meant a vertigo sensation of rocking against slightly changing, unpredictable air currents. Sweat drips out of my helmet as my body tries to cope with the furnace like heat not only beating down but radiating up from the black road surface. If I aren’t careful keeping this lightweight piece of carbon-fiber and metal alloy in a straight line the few scraggly trees hat have thrown down two inch thorns almost invisible on the road are just waiting to puncture slim racing tires. That’s if the sharp granules of volcanic grit don’t burst the rubber first.
What am I doing here? Taking a last ride before I toe the start line of the World Ironman Triathlon Championships, an event documented as the longest one day endurance race on the planet.

Consisting of a 3.8km swim, followed by 180km bike and a full marathon, the clock started at 7am and all three disciplines needed completion before midnight in order to earn the non gender specific title of IRONMAN! Everything was made harder by Open Ocean swimming (currents and swell), sometimes escorted by spinner dolphins, and then cycling on roadways that intersected the lonely, empty vistas where one is likely to see the local donkeys before encountering another competitor. On my first bike ride out from Kona I set out to find the hill someone told me inclined for 25 miles, with a mindset that such a climb simply was not possible. I was overawed by one of the first lookouts. Cresting a small rise I’d passed a sign that declared “donkey crossing” and a breathtaking wide open panorama greeted. Spinifex grasses the only vegetation clinging to crevasses in the black molten looking rocks. My forthcoming competitive bike ride was to be 180km (6 or 7 hours) in this, I could not even imagine further than the point at which I stopped. Not to mention the trade winds that knife across the island strong enough to blow cyclists off their bikes. After withdrawal of bike from one’s posterior on race day, you need to endure convincing your legs to run out into the heat and humidity even back out onto the Queen K highway towards the ‘energy lab’ where all physical energy seems to be sucked out reducing runners to a slow-snail-shuffle.

On this trip the Goddess Pele has made her disgruntlement felt already. Preparing for a lead in event, 10km fun run along the famed A’Ali drive the earth shook with a 6.7 Richter scale earth quake. Lava rock fences had tumbled down, Honolulu airport had been closed; tourists in Waikiki had fled into the streets and the epicenter was only up the road at the bike-turn-around point the sleepy village of Hawi. Still the run went ahead with the local organizers saying ‘that was nothing,… just a little cough’! But faced with Ironman distance triathlons the fear factor is difficult to evoke.

This little earth-trembling hiccup played havoc with our arrangements for the last training ride. We can no longer ascend the major hill up to Hawi because the highway is closed. So our troop of Aussies is dropped at the base and will cycle back to town – a distance of 45kms. Our support crew points out a landmark known as “Bum crack Hill” we can all see the resemblance but much discussion is about if locals also use this term or is that name only coined by irreverent Aussies? So our support crew waits at the half-way point of this road with cold drinks as equally dwarfed by the landscape as we feel. And they wait, wait, peer down the long empty roads and wait some more.

About the Author. Karen grew up in Perth, West Australia. She has travelled widely, often as a member of Triathlon teams, sometimes representing her country. Twice being able to complete the epic World Ironman Triathlon Championships in Hawaii. Professionally she teaches English and her fiction writing work can be found on various websites or in magazines.

#TogetherAtHome We Said Go Travel News April 2020
Norway: A Glimpse between Winter and Spring
#SPGAmex New Orleans: Part 3 What to eat!
90210 Reboot: Are You Watching Tonight?