Sierra Leone A Wonder of the Earth 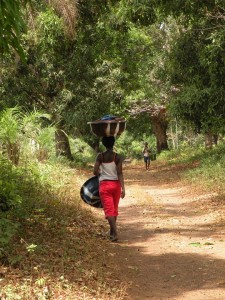 It was late in the evening when the plane touched down and the doors opened; that was it…………my first smell of Africa; a warm and comforting scent of spices and soil.

In March 2011 I travelled to Sierra Leone with the maternal health charity ‘Life for African Mothers’. All I knew of Sierra Leone was what comes to mind for most people, the dreadful civil war that destroyed the country over a decade, but I was keen to learn more.

I had the most incredible time. For any visitor to West Africa you will be blown away by how wonderful, warm and welcoming the people are. I never felt unsafe. It is so exciting to visit a country where they are excited to have visitors. I travel as much as I can, but I have honestly never felt like I have been ‘off the beaten track’ until I visited Sierra Leone.

The first half of my trip was spent visiting hospitals and health centres. You could imagine some of the things I saw, however I always felt like there was light at the end of the tunnel. I met incredible doctors and nurses determined to help rebuild healthcare in the country. I felt inspired by their passion and saddened by what they had to deal with everyday.

Next to the University of Freetown is a slum area called Kroo Bay. They never get foreigners visit as people think it is dangerous, which it is (but not because of crime). The level of disease and infection is rife, the terrible unsanitary conditions were appalling, but the children were gorgeous, 4 on each arm we had friends for life; it was heartbreaking to leave them behind. However we think they left us with something to take away from our visit- my hubby caught the mumps, which I’m almost certain came from there! Thankfully no lasting damage! 

If I had to pick my favourite thing about Sierra Leone it would have to be the children. The sheer joy and happiness you see on their faces is incredible. Many children hadn’t seen white people before and they would shout ‘Oporto, Oporto’ and they would run up and stroke your white skin; they were amazed by it! I had a packet of balloons which I would often blow up for the kids, it turned out to be hard work as there are A LOT of kids in Sierra Leone! Not to mention how hot it was trying to blow up balloon after balloon, but who couldn’t resist those gorgeous faces? ‘Oporto give me balloon!’

Sierra Leone has some 300 miles of coastline and it is almost untouched and deserted, the sands are white and the fish is plentiful. We spent some time at the eco tourism project Tribewanted in John Obey on the Freetown Peninsula. It is primarily a fishing village and we made friends with the fishermen there who cooked lobster for us and true to Sierra Leone hospitality wouldn’t take any money for it! We would spend the afternoons with them after they had finished fishing for the day and they would teach us Creole. It is such a fun language a mixture of pigeon English, French and other influences; dinner time is called ‘chop’ and once you have finished your dinner you say ‘chop done done!’

On a number of occasions I found myself visiting schools and teaching lessons on the spontaneous request of people, no chance to even prepare. So I found myself teaching an anatomy lesson to the boys at the Craig Bellamy Academy in Tombo! I think I did OK as I am a nurse, but they were more interested in Football (unsurprisingly) and finding out if my husband and I were indeed married and had children (there was even applause!) 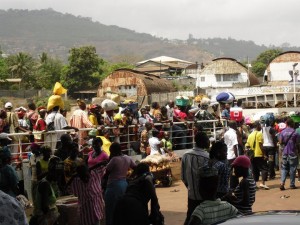 Sierra Leone was quite probably the most enlightening trip of my life. I didn’t want to leave, but with hardly any running water anywhere, no mains electricity, poor roads, a life expectancy of about 38 years and 1 in 8 women dying in childbirth, I decided the best thing I could do for Sierra Leone is to tell everyone about its wonderful people, panoramic landscape and fundraise to help Salone rebuild itself.

About the Author: Sarah Gev is a nurse, traveller, foodie and kindred spirit. Sarah is a big advocate for maternal health in the developing world and supporter of the maternal health charity Life for African Mothers.

Chile: My Worst Food in the World
Traveling cheap: Why you don't need much to explore
Vietnam: When Monkeys Attack
Filmmaking Tip: Audio

4 responses to “Sierra Leone A Wonder of the Earth”