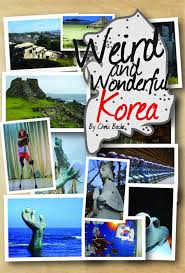 Thank you to Chris Backe for sharing one of his Seoul Itineraries with us from his book, Weird and Wonderful Korea

“Welcome to Korea! An introduction: South Korea – home of soju, kimchi, and love motels. Presented here are the weird and wonderful parts of Korea – the places that tourists rarely reach and even locals don’t know much about. Read this for the real stories and histories behind some of Korea’s most unusual and fascinating destinations.”

Baedari Brewery has been brewing makgeolli (rice wine), jukyoju (a clearer and more potent rice wine) and soju (Korean fire-water) since 1915. In 1974, Goyang makgeolli was sent to Pyeongyang for the first inter-Korean summit. This museum, dedicated to the brewery’s history, was founded in 2004, and today the fifth generation continues the legacy. Although Baedari continues to produce alcohol, you won’t see it at every corner store. While this particular museum / brewery doesn’t offer taste tests or samples, plenty of offerings exist in the restaurant. Start by entering the main building and appreciating the first few simple exhibits – the majority of the collection is upstairs on the second floor.

막걸리, or makgeolli) and soju. The technology these days is much better of course, but looking at over 90 years of history has its merits as well. They have the wear and tear expected of items used in an industrial setting on a daily basis. Some are simply displays, while other exhibits are models describing the different processes of making rice wine – unfortunately, nothing is in English for the foreign visitor or tourist. Try reading the descriptions if your Korean is good or a Korean friend is with you.

Once you’re finished with the museum, there’s Korean food

glass) downstairs. While the typical makgeolli is fine, give the 천년초 막거리 (cheon- nyeon-cho mak-keo-li, or cactus makgeolli) a try. It’s a little pinker and sweeter. There is some irony that you’ll only get by reading the bottle’s labels – Baedari’s cheap but ‘traditional’ makgeolli contains wheat from the US, as well as aspartame. The premium- labeled glass bottles, meanwhile, use organic rice.

About the Author: Chris Backe blogs about travel and life at Chris in South Korea and Chris in Thailand. He’s been published numerous times across Korea, including Groove Magazine, 10 Magazine, Busan Haps, The East (based in England), and visitseoul.net. Weird and Wonderful Korea is his fourth book –Octopus Formality, a book full of Konglish, was his third, while Korean Made Easy was his second. He doesn’t talk about his first book. He’s currently living in Thailand researching the most unusual destinations in the country.

Philippines: Caves, Coffins and Clouds
GENESIS X CONCEPT UNVEILED in DTLA!
Who Are We? The Three Lessons of the Grasshopper
Celebrating the Patron’s Birthday in San Sebastian Xolapa