My Prayer Wheel in Tibet 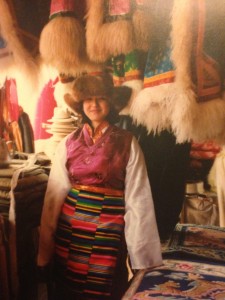 Miles off into the distance, atop a snow-capped mountain and beneath a clear blue sky, was a brightly colored two-story wooden Tibetan house where I was to spend my holiday week away from Beijing. I was fifteen years old. It was the winter of 1999. And I was oceans and worlds away from home – Chicago – studying abroad in China. My Chinese school had arranged a home stay for me at the wooden Tibetan house, which I was told had no bathroom, running water, or heat. Having just spent the last ten months resisting breathing in the coal-infused air of Beijing, I was like an air starved child breathing in as much of the clear blue Tibetan skies as I could get.

Hours whizzed by as I passed groups of yak, made my way to the wooden house in the distance and the sky turned grey, time seemed to stand completely still. Before I could knock on the ornately carved door of the home, a young boy I would come to know as “Samdup” leaped from the ledge of the second story down to where I was standing and stood just staring with a curious and fearless smile. A beautiful, shy Tibetan woman with tan leathery skin opened the door and welcomed me in. The next several days were spent learning to make traditional Tibetan staples (yak, and yak butter tea, which is made from yak milk), sharing the best of American music (Mariah Carey) on my walkman with my Tibetan family, exchanging dance moves – several songs of Tibetan cham dance were followed by the Macarena and country line dancing. But what I recall most vividly of my time in Tibet was watching Samdup put on a serious face and turn a Tibetan prayer wheel, which is a cylinder with sacred Buddhist prayers written on it. Each revolution of the wheel is counted as a prayer and is used to accumulate good karma and get rid of bad karma. Samdup was the eldest child in his family and underneath the playful, curious, youthful exterior, lived an older Samdup with signs of age from his quiet anger about the uncertain independence of his people. Beyond the clear blue skies and snow-capped mountains, were overrun towns with the influence of China everywhere: Chinese karaoke bars, Szechuan restaurants, and 24 hour internet cafes.

Even though we shared no common languages (Samdup spoke no English, Mandarin, or Vietnamese), Samdup and I became good friends feeding the yak together in the morning, churning our yak butter tea in the afternoon, turning our prayer wheels at night, and telling stories with our eyes and expressions. The thought of my slice of heaven – the clear blue skies, the frosted mountains with snow pure enough to eat – one day disappearing and being replaced with big-box stores from the Mainland – was devastating. I picked up Samdup’s prayer wheel and began to turn it with all my might. Waves of faded memories of my parents fleeing Communist Vietnam by boat in the 1980s washed over me; I suddenly recalled that an uncle in Vietnam spent 10 years imprisoned in solitary confinement for his religious beliefs; I saw my mother running through a dark jungle – barefoot, pregnant with me in her womb, and holding my two elder siblings – to get away from Vietnam and away from the political persecution she faced if she had stayed. I thought of the prayers my mother desperately chanted as her boat began to sink – just moments before a U.S. Navy ship sailed by and plucked her out of the unforgiving South China Sea to bring her to the United States, where I was born weeks later. My mother’s prayers apparently had been answered after all. Maybe mine would be too.

On my final day, as I packed up my gear to say goodbye to the colorful wooden Tibetan home and all of the wonderful people inside it, Samdup and I exchanged gifts: a walkman with a Mariah Carey mixed tape for him, a bone from his favorite yak for me. After hours of trekking, the wooden house was now a speck in the distance, drowned out by the serene silence and overwhelmingly blue sky. I turned a corner, and walked through a tall brick gate that marked the end of the village and the beginning of the town, spotted a 24 hour internet café and gave in to my 21st century needs. I opened a browser and searched on google, “Samdup.” The words “fulfillment of one’s wishes” returned. I smiled curiously to myself and got up to head to the train station back to Beijing, feeling so fulfilled, so inspired, and so full of determination to take on the next day’s challenges.

About the Author:  Ha-Thanh Nguyen is a Vietnamese-American attorney practicing law at an international law firm in Washington, D.C. She loves to create art, whether it be a brilliant argument, drawing, or essay that evokes emotion in its viewers. On her free time, she can be found in an art gallery or a cool coffee shop.

Trains in Japan: The Good, the Bad, and the Useful
Taiwan: A place to fulfill my Dreams
New Hampshire: Fully Alive in the Dead of Winter
The Sisters at Petra, Jordan