Creating Moments in time in Ecuador 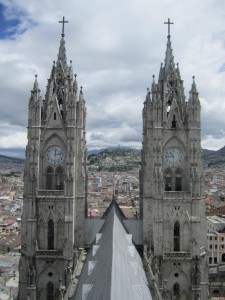 Time is an illusion; a man-made restriction set upon ourselves to dictate order and retain control. We attach verbs to it like spend, save, waste, kill, take and run out of, hoping to grasp onto time as though it were some tangible thing. We define life itself as a certain amount of time spent upon the Earth. The Basilica del Voto Nacional, however, showed me that life is not so much about spending time, but rather about creating moments and building memories.

It was the first building I saw when the taxi approached Quito’s historical center. With frontal towers reaching 115 meters toward the heavens, the Basilica del Voto Nacional, looming over the rest of the city, was hard to miss. Immediately I decided that the centuries-old, neo-gothic church warranted a closer look; little did I know, that it would be where I would spend the rest of the day.

A 15 minute walk took me to the gates of the basilica and I stared up, up, up in awe of its sheer size and dark beauty, wondering what stories and mysteries its walls had seen, heard and kept. I snapped a few photographs and then ventured into the grounds to take a closer look still. The church itself seemed closed and I had just mentally settled for strolling around the perimeter, when a woman approached me from within and asked if I wanted to go up into the tower. She laughed openly at my childish, excited response and reconfirmed that yes, I really could. After exchanging USD 2.00 for a ticket, I made my way over to a rickety elevator and rode it to the “third floor.”

Somewhat confused, I stepped out of the elevator and into an empty room, all its windows closed, cracked and dusty. Then, relieved, I realized the room ended on the other side through a small opening, onto the rafters of the church roof. A wooden walkway across the center beam led to a ladder going in the direction I sought – up. Victorious, I climbed the ladder and found myself on a balcony encircling tall, hexagonal stained glass windows, and overlooking the town. I was thrilled.

As I looked down and around, taking more photographs, I realized that more and more people were emerging on this small balcony and heading back down the ladder from which I had emerged, than could have possibly been there before without me noticing. Curious, I walked around to the opposite side of the platform and came across a steep set of stairs going upward. There being nothing and no one to stop me from going up, I did. For someone who is not afraid of heights, I was a bit apprehensive! The stairs were steel, steep and quite far apart, with nothing but a flimsy, slack stretch of chicken wire between them, and nothing below them but air and eventually, the ground. Excited nonetheless, I laboriously made my way up and was well-rewarded when I found myself standing in the spire of the transept, and had it all to myself. Seventy-four meters up, I had a lovely view of downtown Quito and the surrounding hills.

I cannot say how long I spent up there, alone, breathing in the wonder of the city and marveling at the colossal structure surrounding me – holding me up and giving me new perspective. When at last I had had my fill, I clambered back down and headed in the general direction of the clock towers, as I was sure I had seen someone in one from my view from the spire. I quickly found a set of stairs with a sign indicating they led to the clock tower and with renewed energy, I once again began to climb. Stair after stair – some concrete, some steel, some straight, some spiral – I wound my way up and up until I was in the clock.

I was inside a clock! A machine that gives meaning to time. A time machine. I reveled in that fact for a while, before noticing the broken mechanics and stationary cogs. Time was not ticking. Pulling out my camera I quickly flipped through the digital images until I found what I was looking for – the shot I had taken of the clock towers, from the spire. Sure enough, each clock showed a different time.

Time was frozen; it had no meaning here. I did not know when I had arrived at the basilica, or how long I had been there; it did not matter. I had only a sense of great calm and contentment, free from all constraints. Smiling, I basked in the silence of time’s stationary state, and walked on toward the bell tower to continue creating my moment, that I would later build into this memory.

About the Author: Sophie Leroy was raised in the British Virgin Islands, where she still currently resides. She loves the ocean, reading, pizza, the colour blue and her dog, Bear. At present, she is avidly exercising her passion for writing so that she may someday quit her day job.