Mongolia: In Which We Ford a Flooded Gobi River

In a country where 100km is a good day’s travel on the earth roads that serve most of Mongolia,  we had just learned from locals at Baruunbayan-Ulaan, a soum center where we had stopped to get petrol, that the heavy log and plank bridge we heading for in order to cross the Tsaatsyn Gol had been destroyed, a casualty of five days of rain in the Hangai Mountains followed by serious flooding downstream in the Gobi, where I was on a two-week camping trip in July of 2010, traveling in a Land Cruiser with Khatnaa, my driver/guide and Soyoloo, our cook. The closest intact bridge would require almost a two day detour north and then back south, which didn’t appeal to any of us. What to do.

Khatnaa decided that we would drive on west to the river and see what the situation was. Also at the petrol station were two very full Mitsubishi Delicata van’s worth of Mongol men and their families.

In one day that had incident enough to two, here’s my journal entry from July 15, which gives a certain immediacy to what followed:

“What an amazing day. Went south-west with Orog Nuur (Orog Lake) as our goal. Khatnaa knew there was the Taatsyn Gol (Tsaatsyn River) to cross, so stopped at a petrol station to ask about it. Also there were two van loads of Mongols from Togrog who were heading west to mine for gold. Usual Mongol socializing and information exchange ensued. 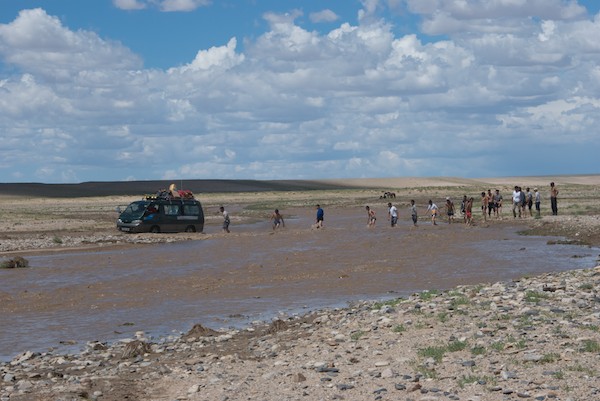 A third van showed up and we all headed towards the river, which was flooded due to rains in the Hangai Mountains.

We got across one stream, but were stopped by a broad ribbon of streams and mud. The main channel was moving fast and pulsing with even more water.

Went back up to the bluff overlooking the river and had lunch, watching the three van loads of Mongols look for a way across and mess around in the water.

Went back down to the river. Khatnaa walked a long way to see if he could find a crossing point, but came back and told us that the last stream of water was the worst of all. So we were faced with going north 100 km to the closest bridge. Such is travel in Mongolia.

Suddenly, there was action with one of the vans. A bunch of guys had formed a line across one point of the main channel and the van charged into the water, started to stall, but the guys all got behind it and pushed it on through!

Well, if a van could make it, our big Land Cruiser certainly could and did, without even needing a push. We did end up with an extra passenger, a little eej (mother) who wasn’t about to miss her chance to ride in our big car.

We got out on the other side and I photographed the other two vans making the crossing. Then said our good-byes.

We followed one van up a soft sand slope. It promptly got stuck so we rolled back down and went around it and on up the hill.

The entire “adventure” of the river crossing was a perfect example of Mongol practicality, improvisational skills and good humor. No one at any point got angry, showed frustration or swore. When it looked like things had stalled out, the guys took a break and goofed around in the water. Or so it seemed. They were clearly having fun but they were, in retrospect, also searching for a crossing point.

The spot they found was one where the channel wasn’t too wide or deep and where they felt the bottom was solid enough for a vehicle to get across with a minimal chance of getting stuck.

Without winches, cables or even rope, they simply used the same solution they always do – push.”

In Mongolia when traveling, even when it’s bad it can be very good.