Donegal, Ireland: A Place I Love

This is an entry in the We Said Go Travel Writing Contest written by Mary Mac from America. Thanks for your entry Mary! 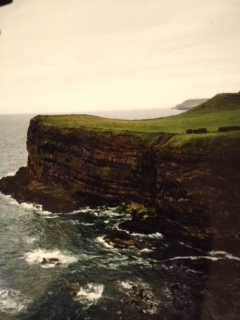 Scientists say that the sense of smell can bring back a rush of memories.That’s why smells, feelings and memories become so easily and intimately entangled. More than anything it’s the memories of the smell of turf fires on an Autumn day that make me want to go back to Inish Eoghan in County Donegal, Ireland.

There’s something mystical in the aromatic smoke that curls up from the stone chimneys that calls to me – pulling on me to stay. The first time we went to Irish Eoghan we stayed in Bed and Breakfast houses. Life on the peninsula seemed to move at an unhurried pace, and I think it had to do with the turf fires.

During the day we’d hike the rolling hills and marvel that there were actually forty shades of green. Every afternoon we’d end up at the cliffs that swept down to the sea, where we’d stand in awe again but this time at the colors of the sea – the soft greens, greys and violet – what we might have expected in the Caribbean but not in the north of Ireland.

We’d listen to the waves crash on the rocks and with our children make up stories about pirates and shipwrecks landing on the deserted sandy beaches. It was on one of these hikes that we saw a peregrine Falcon swoop down and ride the air current and where we were close enough to hear his unforgettable kee-kee story. 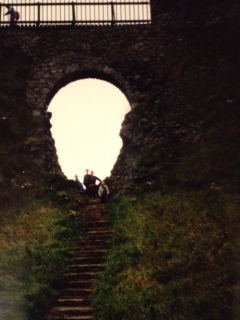 After hiking or driving part of the coast road, the Inish Eoghain 100, we’d come back to the B&B where the smell of  the turf fire would mingle with the aroma of scones coming out of the oven and we’d have them with homemade gooseberry jam and tea. A few afternoons I was so comfortable and content that I nodded off in front of the turf fire.

At night we’d head out to the local pub where there would be a session of tradition music and singing, and even though we were tourists we never felt like strangers.  The tranquility of the day was a contrast to the sound and fury of the fiddles and music in the evening. The songs were a blend of traditional Irish, country western, and Celtic pub music.

The north of Ireland, Donegal, and Inish Eoghan especially is a mystical place that transports me to another time (which magically has the internet).  I hope that you’ll go and experience the smell of a turf fire, the warmness of the people,the sounds of the sea birds, the taste of the salt air on your tongue, and the evening light that will make you fall in love with the place and inspire you to return.

About the Author: Mary Mac:   My parents gave me the gift of wanderlust and since I was very young I’ve collected maps and guidebooks and  traveled whenever I could.  I live with in the Carolinas with  my husband and  our Cavalier King Charles Spaniel, in a nest that never seems to be empty. http://emptynestrovers.blogspot.com/