Live Your Own Life: The Journey of Paralympic Athlete Saylor O’Brien

Thank you to the Saturday Evening Post for publishing my article about Saylor O’Brien. 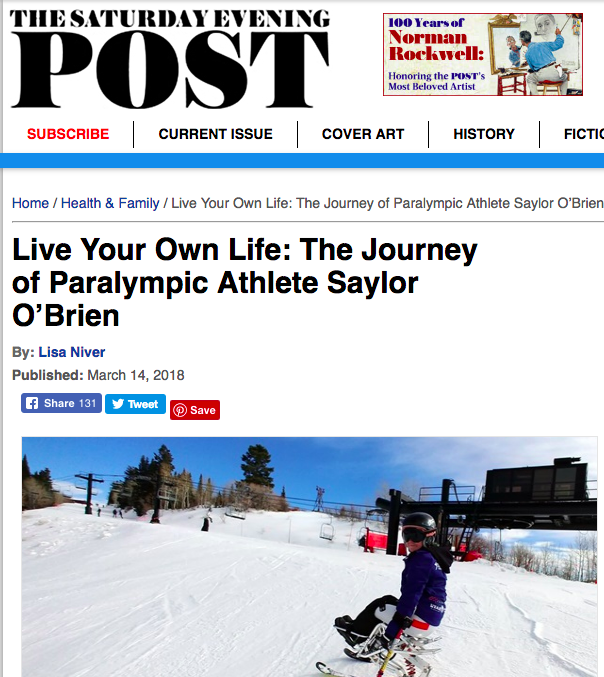 While watching the 2018 Olympic Games in PyeongChang on television, I wondered how the athletes got started and how they had the perseverance to train long and hard enough to compete for their country. In Park City, Utah, some of my questions were answered by a teenage competitor.

Some might imagine that a person with spina bifida might not be top at her sport, sailing downhill at high speeds and winning medals.

But they would be wrong.

I had the honor to ski with 14-year-old Saylor O’Brien, who is on the Paralympic Alpine Development Team. She is the youngest member of the team that trains at the National Ability Center. Saylor has been skiing since she was three years old. When she was ten, she told her mom she wanted to compete in the Olympics. She has shown stamina and persistence her entire life. In fact, she had her first surgery before she was born. Saylor has spina bifida, and her mother chose in utero fetal surgery to close a hole in Saylor’s back that left her spinal cord exposed. Spina bifida is a birth defect that occurs when the spine and spinal cord don’t form properly, affecting 1,500 to 2,000 babies born in U.S. each year. 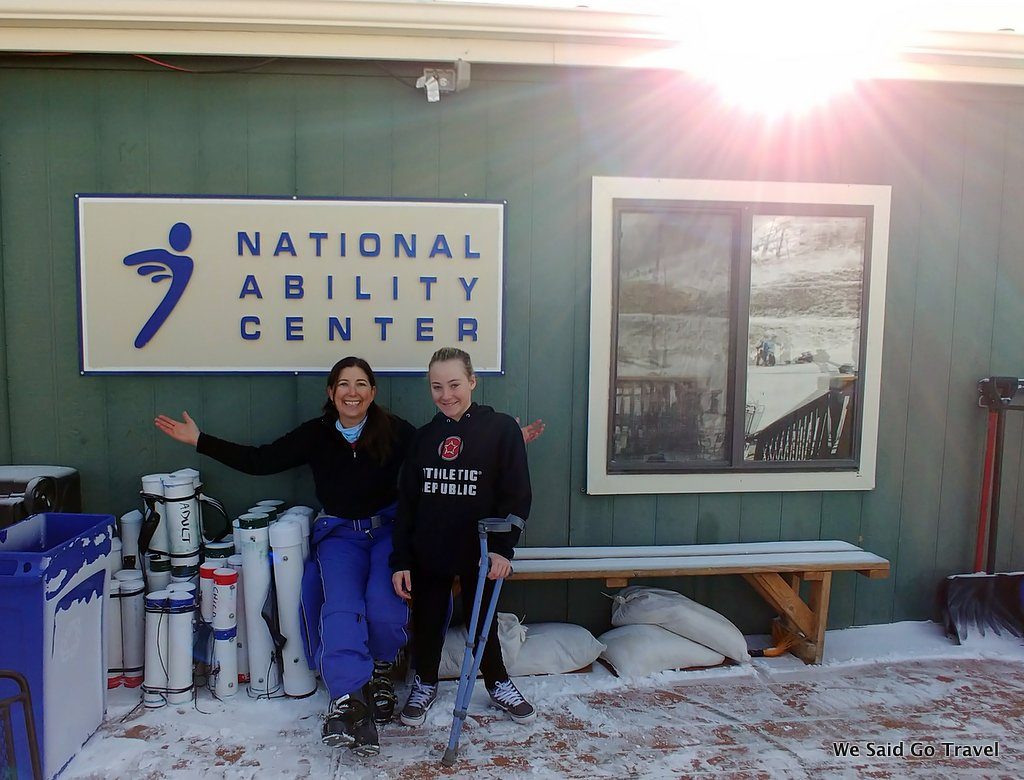 Americans and over a billion people on our planet have some type of disability. The Paralympics opens up opportunities to many with physical disabilities. The Paralympic games began 80 years ago on July 28, 1948 with a single sport and 16 competitors. Starting thirty years ago in 1988 in Seoul, South Korea, the games of the Olympics and Paralympics were held in the same country one after the other. Saylor hopes to compete the 2022 Paralympic Games in Beijing, China.

In the O’Brien family, each of the six children is encouraged to find their passion and make their way forward. Saylor’s oldest brother, Jamaal, is a professional football player for the Green Bay Packers. Her sister, Storie, is a competitive swimmer, and another brother, Stockton, is an accomplished wrestler. Her two youngest brothers have not picked a sport yet, but it seems likely that they will live up to the high standards of their family.

Saylor is committed to do what it takes to improve, participate, and win in her chosen sport. She told me it is “hard to do speed events. You have to get used to going fast. I was probably going 50 miles per hour, but the highest speed is likely 80 miles per hour.” I asked, “How do you get psyched up for a race but remain grounded enough to do your best?” She replied, “Music really helps me. I listen to rock mainly. I like Panic at the Disco, but their older stuff.”

In order to win races, your body and your mind have to be focused: in control, but at the same time relaxed. Saylor told me, “You cannot think about 500 things because your body will not know what to do.” She talks with her coach and thinks about one thing. After the first race, her coach will check in with her, and ask, “How did you do?” Together they decide if she needs to change her focus on the one thing she is thinking about.

Saylor credits her success thus far to her supportive family, amazing teammates, and talented coaches at the National Ability Center. Her favorite thing is, after she has a frustrating result, one of her teammates calls Saylor and says, “Did you leave room for improvement?” Saylor believes there is always room for improvement.

Saylor has been working with the team at NAC for the last few years. She says, “The coaches are amazing, uplifting, and positive. When I am in the mountain center, I only see smiles. It is important for kids who are physically or mentally disabled to feel special, to feel valued, and to believe they can do anything. The volunteers and the coaches make a difference in someone’s life. Everyone feels like they belong there. Some of the kids feel not normal and I think it is okay to not be normal. It is better to not be normal. Everyone at NAC can do whatever they want to do.”

Saylor has participated in many NAC programs to learn what it will be like to be a Paralympic athlete, including an action camp where she went rafting in the Grand Canyon. She says, “It was a life changing experience to be on the water and even really cool to be offline for two weeks. I liked camping too. The best part was to interact with people and see so many people with all kinds of disabilities doing crazy awesome things.” She has tried everything from archery and biking to rock climbing and says the NAC programs have taught her how to be adaptable.

Saylor told me, “It’s your life. No one can tell you, you can’t. Don’t live someone else’s life. Live your own.” She goes to school two or three days a week and trains on the other days on the ski slope with her teammates. She is at the gym several times a week for strength and cardio training.

At her high school, nearly everyone has heard Saylor’s story. Students come up to Saylor and tell her she is so inspiring. She has won medals in Grand Slalom in 2016, Super G in 2017, and is on track to be on the top of the podium at the Paralympic Games in 2022 in China. But in many ways, she is like other teenagers: she has dyed part of her hair blue, she sends texts and puts photos on social media, and she loves her classes in history and science.

Saylor told me she thinks about how her skiing ability has evolved. When Saylor first began, she stood using four track skiing. The decision to be a racer meant that four years ago when she was ten, she had to begin again and learn to use a mono ski. One of her coaches is from Australia, and when he visited recently he told Saylor how much she had improved since one year ago. She explained that moments like that keep her going. 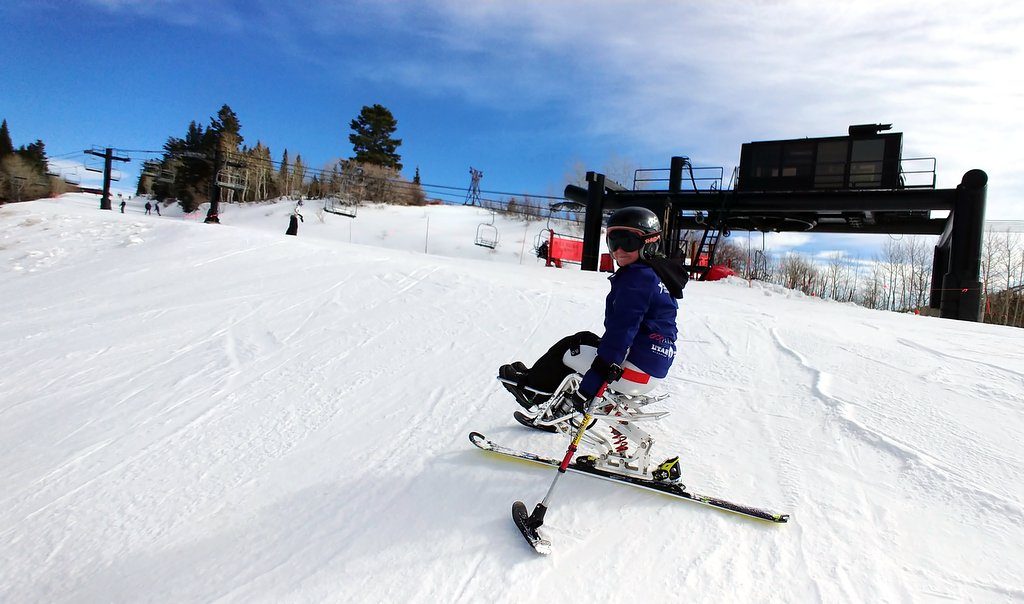 Saylor thinks to herself, “Where have I progressed? Let me compare this year to last year. Who can I ask for help that will give me a reality check on where I am today?” She knows she is stronger this season and advancing toward her chosen goals.

I cannot wait to watch Saylor win a medal in Beijing, China in 2022 at the Paralympic Games. I wonder what else she will have accomplished by then. What are you going to do to make your dreams come true?