When I first moved to Hong Kong in 1990, there was a part of the city that was off bounds. It was an ungoverned slum called the Kowloon Walled City, with layer after layer of tenement buildings so close to one another that daylight sometimes never reached the minuscule alleyways. In the center of the slum was an ancient Chinese yamen, or government building. Although Hong Kong had been a British colony for about 140 years by then, the Kowloon Walled City was officially still a part of China. But it was largely run by organized crime.

I left Hong Kong in 1991, only to return a few years later in 1994. By then, the Walled City had been demolished and a traditional Chinese park was under construction on the very space where the slum once stood. I often passed the general area of the Walled City–after it was demolished–on bus rides to and from my friend Janice’s apartment. I write a little about Janice’s place in my memoir, Good Chinese Wife: A Love Affair with China Gone Wrong, but was so involved in my own drama back then that I didn’t give the old Walled City or the new park (when it opened in 1995) much thought. 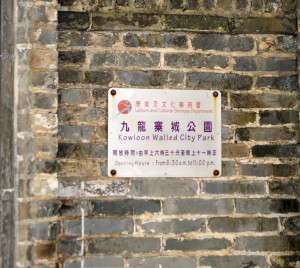 Years have passed since I left Hong Kong eight months after the Handover in 1997. But I’ve often thought of the Kowloon Walled City and a missed opportunity to 1) see the old tenement buildings, 2) watch the demolition, and 3) visit the new park.

So when my husband Tom and I visited Hong Kong last month, I put a visit to the Kowloon Walled City Park at the top of our list. We traveled out to the Lok Fu MTR station and took a cab to the park. On the short ride, the driver told me in Cantonese that we should have just walked to the park. It was that close. But I didn’t want to waste time looking for it and Tom wanted a break from the sweltering temperatures. Once we arrived at the park, it was difficult for me to imagine the former Walled City in its place. The park was one of the most peaceful places I’ve found in Hong Kong.

We walked around the grounds and found a garden with statues of the Chinese zodiac.

There was a nice pavilion surrounded by water. A woman sat under the pavilion reading a book. I wondered if she was taking a break from work or chose to spend her day off at the park. I also noticed the modern apartment buildings in the background, many of which probably weren’t around when I first lived in Hong Kong. 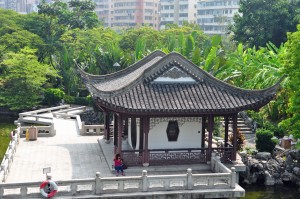 We also found remains of the old south gate and an old rickshaw, one of the few left in Hong Kong. Even the tourist ones aren’t so numerous anymore. 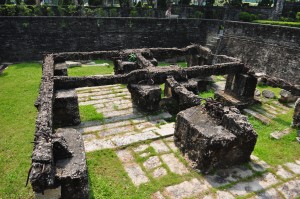 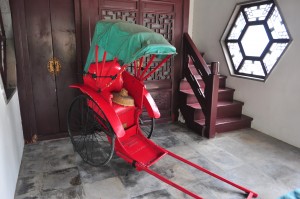 We also came across a few walls with calligraphy and this old vessel.

Tom and I were both happy we’d taken time to visit the Kowloon Walled City Park. He learned about a dark period of Hong Kong’s history and I was able to visit a place I’d thought about all these years. For first time visitors, there are docents who walk throughout the park, offering free information about the history of the buildings and artifacts in the park. We lucked out and met a lovely older Cantonese man who spoke to us in English and another group in Mandarin.

We hope you enjoyed this article from Susan Blumberg-Kason. Learn more about her adventures in her book:

Hiking Southwestern Portugal
Cruising in 2012: Free Will at Sea, But What About Free Wi-Fi?t
The Book Truck READ-A-THON December 6, 2020
Backpacks of Love Delivered in Bali!