Exploring Myanmar: Traveling the Dusty Roads of the New Burma 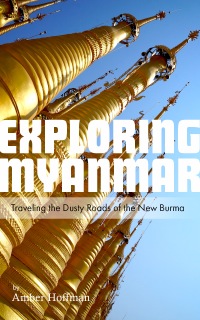 We waited somewhat impatiently for our complimentary transport, from our hotel in Mandalay to the highway bus stop, for our overnight journey to the Inle Lake area. We had a lovely VIP bus ride from Yangon to Mandalay, with only three seats across, air conditioning, private TVs with English movies and a welcoming hostess to help us out. Our bus to Inle had none of these luxuries.

I was told there were no VIP buses going to Inle, or more specifically Taunggyi, the capital of the Shan State, in Eastern Myanmar. To get to Nyaungshwe, the jumping off point for the lake, the bus drops you off at Shwenyaung (Nyaungshwe in reverse), a small town just north, also referred to as the “Junction.” With a scheduled departure of 6:30 p.m. from Mandalay, the estimated arrival time at this road side junction was set for 2:30 a.m. I was not expecting much sleep that night.If there were no VIP buses, I at least tried to ensure air conditioning. The pleasant lady who sold tickets at the hotel said yes to the air conditioning. When purchasing the tickets I also used the words tourist bus, express bus, and direct bus, to try to convey I was willing to pay a few bucks more for a little more comfort. The hotel automatically booked us with their regular bus company – Golden Moon. There was nothing golden about it.

The tickets cost about $13 a piece, including the complimentary transport, which turned out to be a pick up style taxi, a lain ka, with a row of benches on either side of the back, open aired, but covered from the sun. A young couple with a small child, a few backpackers, and some more locals were piled in the back of the truck with us, all with luggage and packages. I held onto the bars on the side of the truck, or on the roof for support. When the driver suddenly stopped at an intersection, we all fell forward with such a thrust that I almost tore my arm from its socket, as I grasped the bar on the roof to keep me from crushing the small child in front of me.
Mandalay is a dusty place, like most of Myanmar, particularly at the end of the dry season. It is a commercial center and certainly is not the most attractive stop in Myanmar. The 30 minute drive from the city center up to the highway in the open aired lain ka left me feeling dirty, just what you want before boarding an eight hour overnight bus. There was so much dirt in the air on the lain ka that at some points I covered my mouth and nose with my t-shirt.

The bus station seemed to be in a dust bowl, the sunset-tinted sky highlighting the clouds of smoke and haze. There were buses and people everywhere – passengers of all walks, vendors, food stalls. It was unorganized and happenstance. If Golden Moon had not dropped us off, I wondered if we ever would have made it out of there.
We pulled up to the Golden Moon bus and all I thought was lovely, with a sarcasm that I have perfected inside my own head. The bus was certainly not VIP. It was decades old, the upholstered seats were surprisingly sandy, considering we were nowhere near a beach. The seats we were assigned were not exactly comfortable, with a large metal bar located where the seat and back met. There were nasty large ashtrays on the seat back in front of us, and everything just felt dirty. There was a
strange staleness to the air. Hardly VIP.

Because there were no toilets in sight, I left the bus to pour some water on my hands and face, an attempt to clean the dust from my body before hunkering down for the night. A futile attempt, as it turned out.

The air conditioning was on, barely, but it seemed to be cooling down. As the bus continued to fill and I prayed people would not be placed on the jump seats, or fold up seats, placed in the aisle, all I felt was the vibration under my feet – it seemed like an airplane engine under foot. Although I joked that I could appreciate the foot massage, I was prepared not to sleep a wink on the eight-hour journey.

After about 30 minutes, the bus stalled. We had not even left the station. As the bus crew tried to start the engine again, a young kid pulled up a hatch on the floor under the seats across the aisle from us. He was tinkering with the engine, or the air conditioning, I could not tell which. I caught a whiff of gasoline, which added to the atmosphere of the Golden Moon bus. The tinkering of the engine underfoot continued a few more times, along with an added bit of drama involving an employee attempting to get the ancient TV and DVD player working – to show a black and white Burmese movie. At first it looked like a military sponsored PSA against opium, but then it turned into some loud soap opera. The sound crackled, and the screen flickered, so that you could not entirely hear or see the movie, but it did not stop them from blaring it for hours.

Within a half hour I was gasping for breath, blowing nasties from my nose, rubbing my eyes, and continuously cleaning the layer of dirt from my face.Twenty minutes into the dusty ride, we pulled over. Not sure why. It seemed we stalled. The TV continued to blare. After some time, people started to get out. My husband and traveling companion, Eric, went outside to try to figure out what was going on. As a six foot, four inch, 235 pound white guy with blonde hair and blue eyes – he stuck out like a sore thumb on the side of the road. But, I just wondered whether we would officially leave the city limits of Mandalay, and what the chances were that we would make it to Inle Lake.

I could not tell if the bus was broken, which was a definite possibility considering the number of times the bus had already stalled. I made a call to a Burmese contact in Inle to ask her to speak to the driver to figure things out. At this point, before we got too much into the country side, I thought about hitching a ride back to the city and hiring a driver, or staying another night and finding a different bus company, with a fully functioning bus, for the following day. The bus had stopped in a deserted and dark section of the roadway, making the possibility of a safe exit remote. At that point, though, I was willing to make a go of it.
Our contact informed us that a passenger had missed the bus, we were waiting for the passenger, they would be there soon, the bus was okay, and we would make it to the Junction at 3:30 a.m. No problem.

We boarded the bus once again and waited for a while. No additional passenger boarded, but suddenly we were on our way. A very vocal young Burmese mom, with her little son on board, was throwing a fit to the driver – being very assertive about the situation. I was proud of her. Between the mom, a few other passengers’ complaints, and the existence of the blond giant, perhaps the driver thought it was time to get moving.

I tried to plug in my iPod headphones, and attempted to block out the noise. I closed my eyes to avoid the dust, and propped my head up with a scarf and a sarong. I tried to convince myself that eight hours was not an eternity and that I would arrive on the other end stronger for the experience.

About the Author:  After 10 years as an attorney, Amber left her job at the largest law firm in the world and decided to start living her life. She is now a recovering tax lawyer, perpetual nomad, intrepid foodie, yoga teacher and traveling the world. She plans, Eric follows, and after 65 countries and 12 years of marriage, she wants to share their travel tales with the world. Amber is currently stalled in Ubud, Bali, and is the author of Exploring Myanmar: Traveling the Dusty Roads of the New Burma.

6 responses to “Exploring Myanmar: Traveling the Dusty Roads of the New Burma”