Goreme Turkey: If You Look You’ll Find Yourself

When I arrived in Goreme, for the first time, it was high summer.

Nestled in the Anatolian heartland, Goreme was a traditional farming community like any other in Turkey except for its spectacular landscape. The arid countryside, already aged and yellowed over thousands of years, glared harshly under the heat of the day. My head spun with the swirls of red, orange and ochre reflected off the surreal cone shaped peribaca. These spiky pinnacles looked like carefully thought out sculptures but were actually the result of volcanic activity and time. The cooled molten lava had eroded under the weight of fierce winter snows and wind. What was left was softer stone called tufa, which has been painstakingly carved away by the villagers for centuries. They used the peribaca as homes, stables, churches and depots right up until the last quarter of the 20th century. Now thousands of visitors are drawn to the region of Cappadocia every year, fascinated by the seeming impossibility of this imposing and solid geological reality, whimsically known in English as ‘fairy chimneys’. 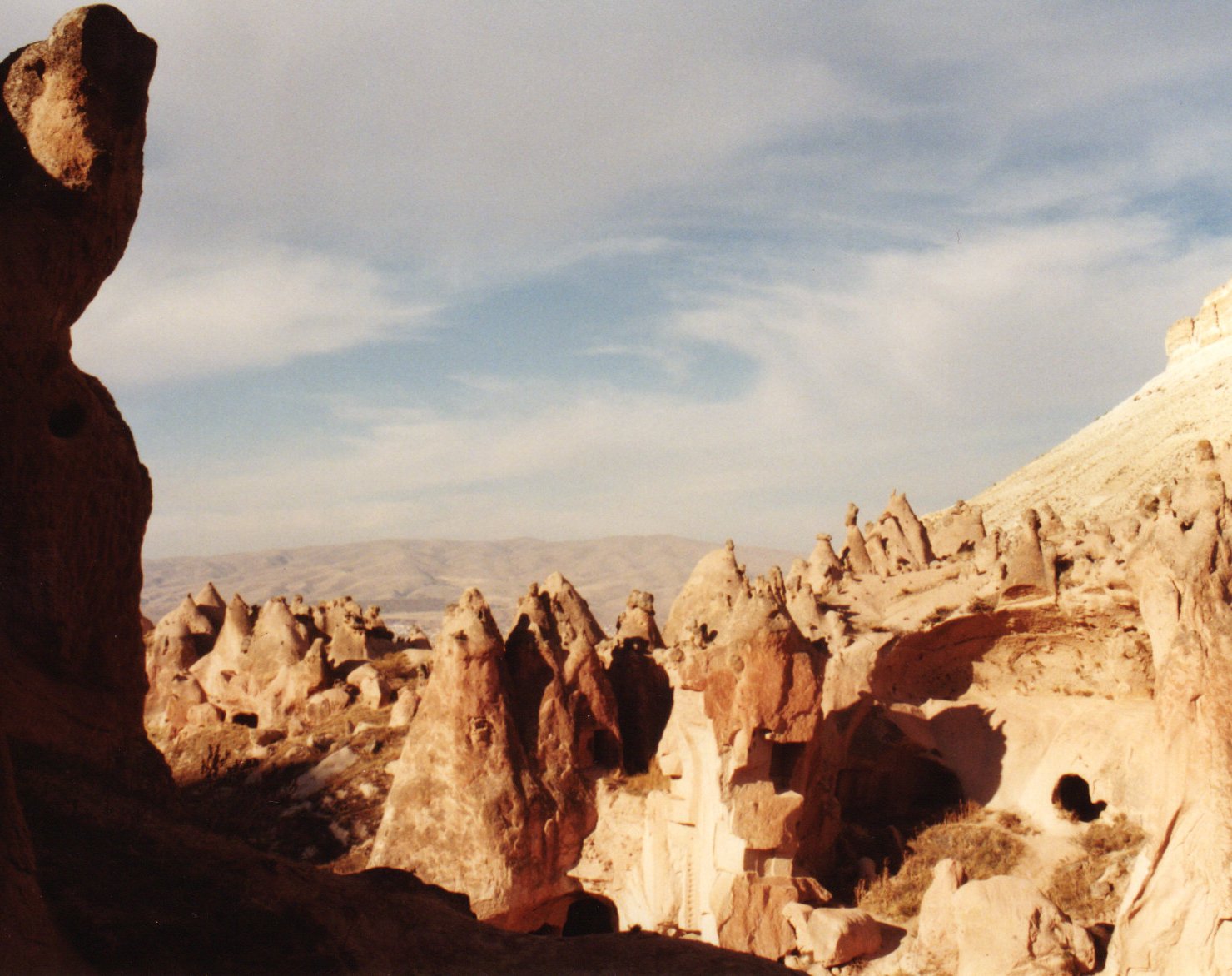 That first time, I lived in a small pension, helping out in exchange for room and board. It was the season of the Gulf War, and while tourists were scarce I was rarely alone. I spent my mornings visiting with the women and my afternoons visiting with the men. The rest of the time I stayed in the courtyard and learnt Turkish from the pension owner’s daughter.

When I visited with the women I sat inside their homes and knitted. I was a good village girl, learning the arts of the hearth. Sitting cross-legged on the floor I listened to my elders and helped out with the children who often solemnly circled us while chanting a simple Turkish song. The women didn’t judge me on my clothes or my job, but on how well I listened and how well I shared. We only had a mutual vocabulary of about thirty words, but with mime and hand gestures we managed to convey enough to decide we were friends. They liked to dress me up to look like them, in baggy legged şalvar pants, a saggy homemade cardigan and hand edged scarf over my hair. In turn I put their hair up in high ponytails and we often laughed until we fell over when we saw the results. Then everyone would pick up a spoon and eat from the same plate until we were full.

When I visited with the men we went riding. On horseback I was fierce and wild, galloping along narrow winding paths beside tilled fields and cantering back up through the twisting valleys to hunt for young apples and green walnuts. The mottled canopy of shade provided by the trees was a cool relief from the unremitting dry heat of the day, and I felt exhilarated. We’d always stop in a particular gorge, dismount and race to a wall of sheer white rock at the narrowest point. Then it was a battle to collect as many stones as possible and throw them at the walnuts hiding in the branches above. When I learnt to open the walnuts by cracking two of them in my hand I felt invincible. I was city born and bred, and it was such a joy to throw, stoop and slowly eat my fill. The men were more impatient and someone, usually one the youngest, would always jump up into the branches of the tree and sing and dance along their lengths to shake free more of the tasty harvest.

Back then I was a fairly solitary person, often shy and confused about who I was, so at times the constant company could be wearing. If I wasn’t with the men or with the women, and could shake free from the pension owner’ daughter, my favourite place to go was a ridge up behind the main street of the village. At certain times there was an absolute silence and a stillness to the landscape that stretched above the village paths and floated out to the horizon and beyond. This echoed inside me and I felt calm and safe. 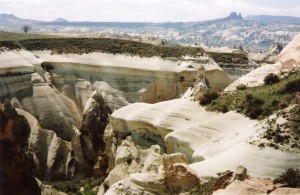 Far away I could just make out a local woman, her donkey loaded with kindling, following a track down to her home. Behind her, in the glittering rolling hills and smudges of purple in the valleys I could see that autumn had come. The leaves shimmered barely red, barely silver. For me though, it was like spring because at that moment I realised I had a peace of mind and happiness I had never experienced before. I was free of self doubt and questioning and was just enjoying the moment. It was Göreme,Turkey,  with its unique land and people that let me understand I could be that good girl and that risk taker and still be at one with myself. I had found freedom.

About the Author: Lisa Morrow: I was born in Sydney, Australia, and grew up on the leafy lower North Shore. I hitchhiked through the UK, travelled in Europe and arrived in Turkey just as the Gulf War was starting. In Turkey I worked as an English teacher at universities in Istanbul and in central Anatolia. I have written about my experiences as a blue-eyed foreigner living in a largely non-Western Turkish town.

Canada: I Enjoy Myself Without My Ears
Oman: Tears on a Beach
Nigeria: The Ruin at Old Oyo National Park
Malaysia: Driving Blind in Kuala Lumpur

One response to “Goreme Turkey: If You Look You’ll Find Yourself”