Canada: I Enjoy Myself Without My Ears 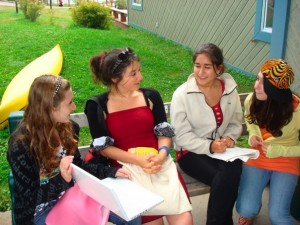 I hate Klezmer music. The whiny shriek of the clarinet sounds like a castrato who woke up to find a tarantula staring at him. The tunes all sound like a newly bar-mitzvahed boy went crazy on Clarinet or Trumpet Hero. The roughness of the syllables coming from the singer’s mouth reminds me of what I imagine pre-WWII Eastern Europe to be like, a place my grandparents left for a good reason.
But from the ages of four to sixteen, I’ve spent my summers in the Quebecois Laurentian Mountains listening to the music I despise 24 hours a day at KlezKanada, a weeklong Yiddish cultural festival.
I love every second of every year at KlezKanada in Canada.

From the moment I first walked on to the gravel of the driveway that leads into the KlezKanada campsite, I was an instant celebrity. My father, born and raised in a Yiddish-speaking household, is the festival’s local celebrity. His witty and educational classes on Yiddish culture and language, as well as his hilarious MCing of the final, are the highlights of the attendees’ week. Whenever I was asked who my daddy was, the tone of the adult, who was usually trying to get me in trouble, changed from obnoxious and authoritative to awestruck and endearing.

By the second day of my first year at KlezKanada, I realized people weren’t buying me all the Coketails in the world because of my cute smile and funky hats. I was in a position that allowed me to act against the etiquette all the other children had to obey. And with my dad’s laid-back attitude, I could do whatever I wanted.

I loved to walk in on my father’s classes and tell the students how dumb they were because they couldn’t tell the difference between the letters gimel and zayn. I climbed onto the stage when my dad MCed and snatched the microphone away and began to test out my comedic material. I criticised the chef for serving anything but dessert. But everyone simply smiled at me and told me how cute I was.

Since the majority of people who attend KlezKanada annually are elderly, they don’t realize that I grow up a bit more every year. When I was sixteen, I was laughing with my friend during a concert. An old lady in front of us told my friend to “zip it!” but her eyes softened when she looked at me, and she proceeded to tell me never to hide my beautiful smile.

But my favourite part of KlezKanada was the interviews I conducted with my three best friends. Every day we would choose a new victim to interview. Sometimes it would be people we knew well, such as the teenagers whom we thought were so cool, other times it would be random people, such as the clarinettist that bore a striking resemblance to Chad Michael Murray. No matter who it was, I was notorious for asking the most inappropriate questions.

“How many girlfriends have you had?”
“A couple…”
“A couple means TWO! A fifteen-year-old only had TWO girlfriends! What a loser!”
I would continue to ask these types of questions, unknowingly taking on the role of the National Inquirer: Yiddishland Edition.

“Have you gained weight? I saw you eating a slice of cake last night—control yourself, man!”
“Did you put your eyeliner on in the dark today? You look like a raccoon.”
“Remember that time you asked Leah out and she rejected you?”

Every day, no matter how inappropriate the questions were, my three friends and I would publish our hour-long interviews in the daily newsletter. The newsletter was distributed to everyone’s dinner table; our interviews were the most popular page. We considered ourselves to be serious journalists. 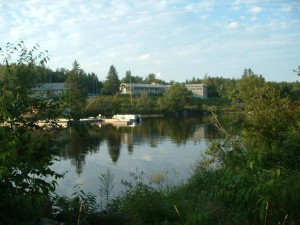 When we turned fourteen, we stopped doing our interviews because we decided these questions were no longer cute, but rude (the old people may not have remembered we were older, but we were mature enough to stop ourselves). Though I never interviewed anyone so brutally again, this experience has greatly influenced my life decisions.

I always loved the interviews. I found out some incredibly personal things about people I had known since I was a baby. I was amazed how comfortable people felt in conversations with me. Inadvertently, these interviews helped me determine that I want to study journalism in university.

Whenever I write an article, obtaining interviews doesn’t scare me because I remember that if my four-year-old self could look someone straight in the eye and ask her about her romantic relationships, I can do the same at any age.

About the Author: Sabina Wex: I am a freshman at the University of King’s College studying journalism. Find me at Lil Hate Crime or on twitter @sabuwex