The English Lake District is without doubt a magical place, full of history and scenery that could make a man weep, or at the very least cause him to get his camera out. But it’s also somewhere I’ve been many times before, usually in the rain, and so when my wife suggested we go there on a walking holiday I did wonder if perhaps her memory was playing up a little.

Could she not remember me screaming through the lashing rain (the sixth consecutive day of said horizontal precipitation), “I’m never, EVER coming here again At least not until we have kids and we want to punish them”? I looked at her and raised an eyebrow in a manner I hoped looked facetious, at which point she made a noise that sounded a bit like she was choking on a false eyebrow (do people wear such things?). I told the facetious eyebrow to stand-down and swapped it for my similar-but-subtly-different quizzical eyebrow. She made the choking noise again at which point I abandoned non-verbal methods and said, “Yerwhat?” 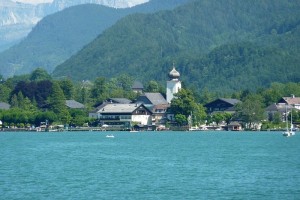 Turns out the strange noise was actually her saying Salzkammergut, or, in other words, the Austrian Lake District. Phew, we didn’t have children I didn’t know about who needed punishing. Relieved that our relationship wouldn’t have to endure another week of walking in the rain of North West England I was keen, without really knowing too much about it. 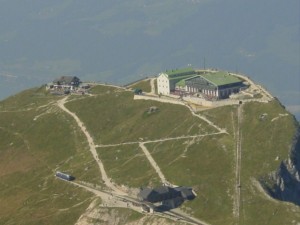 Luckily she has a friend who lived in Salzburg who helped us arrange everything. We flew into Salzburg in North West Austria with the plan to travel around largely on foot with a few journeys on public transport to ease our burden. Given this was an area I knew practically nothing about, never having travelled to Austria at all, I was genuinely blown away by the amazing scenery and quirky warmth of the local people. 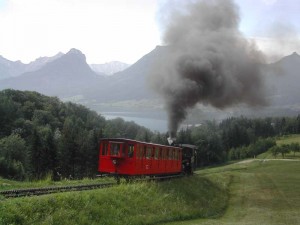 We spent a night in Salzburg itself, my wife’s friend showing us an insider’s view, the secret bars and beer gardens, as well as the main tourist things such as some serious Mozart action (the great composer was born there), before heading on to Strobl.

Strobl lies on the eastern edge of Lake Wolfgangsee, one of the finest bodies of water in the Salzkammergut region with an area of about 13km2. The water is a clear, deep blue and the lake is surrounded on virtually all sides by mountains; mountains which we simply had to climb. As well as Strobl there are a number of other hamlets around the lake and the view from our elevated position down onto these and the lake itself was simply stunning. The clean almost sweet air and perfect sunny day meant we could enjoy the vista in all its glory – very different to a misty day at Windermere! 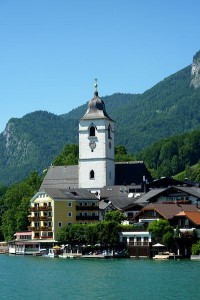 From there we stayed on the shore of the lake and walked to St Wolfgang, a small, idyllic village that appears to have been stolen from a postcard sent from a fairytale. The cobbled streets, beautiful church and quaint houses had an almost instantly soothing effect, whilst the Schafberg Railway that climbs 1200m up into the mountains gave us a more exhilaration and yet more sumptuous views of the lake. The line is an old-fashioned cog railway and dates from 1893, but don’t let its age put you off, it’s as smooth as most UK commuter trains, and a whole lot more relaxing.

From here we moved on to a seemingly endless supply of picture-perfect villages, including St Gilgen, Fuschl and Mondsee, the latter sitting on a lake of the same name and home to a 15th century church that featured in the Sound of Music.

There are 76 lakes in the region, of which we saw only a handful. One can never tire of scenery such as this but what made our Austrian walking adventure so enjoyable was that there was also plenty of things to do as well. Old railways and cable cars that were among the first of their kind, atmospheric churches, chapels and castles, various Mozart and Sound of Music points of reference and, perhaps best of all, seven days of sunshine, meant this was the perfect holiday.

With plenty of good restaurants, pubs we ate and drank to our hearts’ content, with Kasnocken(cheese dumplings) washed down with a Krügerl or two of wheat beer helping us replenish energy levels after a hard day’s hiking. There are options to partake in a number of water sports on some of the lakes, as well as mountain biking, climbing and host of other activities, so if you tire of walking there is plenty to mean you will never get bored. Although for many, the ever-present natural splendour will be more than enough.

Free Accommodation Isn't Just for Bums
Mauritius: Traveling is not always about going far far away...
Siem Reap, Cambodia - An Unexpected Evening at a Pagoda
London: Blooming Beautiful with Flowers and Fauna

One response to “Going to the Lake District, Austrian style”