Too Unspoiled? Beauty Spots and Bank Machines in Clare, Ireland

Facing the Atlantic coast, Ballyvaughan in west Clare was a long trek from Dublin. Driving on the narrow, twisty roads is not for the faint-hearted – I was just a passenger, and I still fancied a drink afterwards – but like much of rural Ireland, this village in the western province of Connaught is inaccessible by public transport. We checked into our hotel, looked out the window at the car park for a bit, and set out to explore the village – hopefully incorporating a trip to an ATM on the way.

Ballyvaughan does not teem with attractions and visitors’ centres (it does, however, have a signpost that is a designated landmark. Really), nor does it have an ATM. We walked along the peaceful coast, admiring the flat ripples of the bay lapping against the stony strand. We passed a river bed which had grown thick with grass, and a small cluster of adorable donkeys nibbling where water once flowed. A sign on the pier advised us to be alert for signs of drug smuggling and provided a phone number to call if we saw any suspicious activity. I thought of Enid Blyton’s Famous Five books, of intrepid children in a rural idyll uncovering smugglers. For all its grittiness, the Customs Drugs Watch sign just served to underscore how much Ballyvaughan seemed to have landed here from another time.

We stopped for tea and an excellent chocolate cake in An Fear Gorta, took some photos in their gardens and walked back to the hotel. It was growing late, so we ate a meal of Atlantic seafood looking at the Atlantic, in a pub with walls covered in ephemera. It was pleasant and it was serene, but it may have seemed we came a long way for very little.

Ballyvaughan is a short drive from the Cliffs of Moher, one of Ireland’s most famous landmarks. The Cliffs appeared in Harry Potter and the Half-Blood Prince, and had a major role in cult film The Princess Bride as the Cliffs of Insanity, which Fezzik climbed as Buttercup and Inigo clung to him. Our second day in Ballyvaughan was bright and still, so we headed for the Cliffs via the stunning coastal route. It is no longer possible to walk at the top of the Cliffs without paying an admission fee, and due to an unexpectedly strong objection to paying admission to be outdoors, we opted instead for a boat trip beneath the Cliffs, which was wonderful. As we waited to set sail, a dolphin swan under our small boat, and a column of rock rising from the water almost seemed alive as it teemed with sea birds. Admittedly we missed the views from the top, which are said to be stunning, but seeing the Cliffs from below did not feel like second-best. 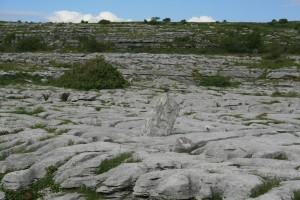 Ballyvaughan also lies on the edge of the Burren, a unique and harshly beautiful limestone landscape. One of Oliver Cromwell’s generals (who, it must be said, may have been particularly blind to any charms the West of Ireland may have, since his boss told the Irish they could go to Hell or to Connaught) said that in the Burren, there wasn’t water enough to drown a man, wood enough to hang him nor soil enough to bury him. Nevertheless, a surprising amount of plant life thrives in the cracks between the limestone ‘pavement’. The Poulnabrone dolmen, a Bronze Age grave dating from 1750 BCE, is an iconic symbol of Ireland and worth the walk. The Burren is bleak, stony, grassy and still – but there is nothing like it anywhere else in Ireland.

On the edge of two iconic Irish landmarks and with a charm all of its own, Ballyvaughan was worth the drive. Be warned, though – we couldn’t find the fabled ATM in the nearby town of Lisdoonvarna, and had to live on debit cards and pocket change until we hit Ennis on the way home. There may be such a thing as being too idyllic.

Ellen Brickley is 29 years old and lives in Dublin, Ireland. When she isn’t working on a novel, she can be found pursuing her quest to find the best chai latte in Europe. She blogs about travel at shoelock.net and her writing has appeared in U Magazine and the Dublin Explorer. She tweets as @EllenBrickley.