This is an entry in the We Said Go Travel Writing Contest written by CosmoHallitan from America. Thanks for your entry Cosmo!

It’s not difficult to find inspiration for visiting Thailand. People wax lyrical about the bliss found on the golden shores of its wind-swept isles, gush about the warm hospitality of the locals, and rhapsodize about the famously delicious cuisine. But when we were planning our first trip to Thailand and plotting our course, it was more challenging to find glowing reviews of Bangkok. In fact, several people tried to dissuade us from visiting the capital altogether! We were warned about traffic-clogged streets, rampant prostitution and a plague of scam artists pestering visitors at every turn. Wanting to form our own opinions, we booked five nights in Bangkok – not long enough, as it turns out.

I was enchanted with Bangkok from the moment we deplaned and walked through the glass doors etched with mythical figures into the sleek airport terminal. It was my first introduction to the ancient-meets-contemporary theme that envelopes the city. Glass and steel skyscrapers, air-conditioned shopping malls and the accoutrements of modern society have sprung up around centuries-old temples, monasteries and palaces. Buddhist monks in saffron robes can be seen everywhere, collecting food alms from faithful merit makers, worshipping at wats and looking at amulets in the market.We even saw signs posted on metro trains instructing passengers to offer up their seats to the holy men. 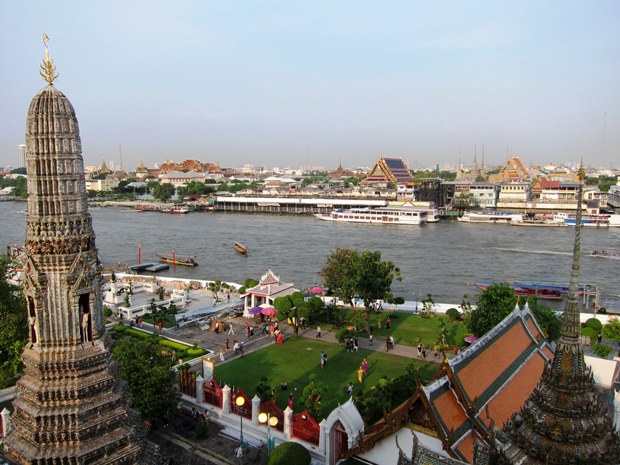 The sole country in Southeast Asia never to be colonized, Thailand is understandably proud of its cultural heritage and this is on great display than Bangkok. Having avoided the destruction of radical revolutions such as occurred in neighboring countries, the temples of Bangkok are among the most extraordinary I’ve ever seen. Every square inch of them is covered in brightly colored porcelain tiles, mirrored glass and gold leaf that shimmer in the sun. Figures from Thai mythology are found all around the wats, with five-headed nagas slinking down staircases, gracefulkinnons frozen in mid-dance and pairs of five-meter-tall yakshas guardingthe entrances.WatPhraKaew, which houses the Emerald Buddha, Thailand’s most cherished relic, is especially magical, with hundreds of gilded garudas lining the base of the sanctuary. All this ornamentation is anything but gaudy, however. I found the beauty and the revered place the wats hold in Thai culture to be almost otherworldly.

Yes, the traffic is terrible, but the state-of-the-art train system makes that almost irrelevant. Knowing that Bangkok was originally a city of canals meant for boat traffic, we took to the water and reached many of the main attractions via public ferry. Sure, it may have taken a little longer, but I loved seeing the city from the Chao Phraya River as the kings of yesteryear intended. You can pay more for the tourist express ferry if you are pressed for time, but we preferred sitting (or more often standing) alongside the local Thai on their way to work and the monks going about their day.There may be some new buildings and flashy hotels on the riverbanks, but the vestiges of the past stand proudly alongside them. It was easy to imagine what life must have been like a century ago. 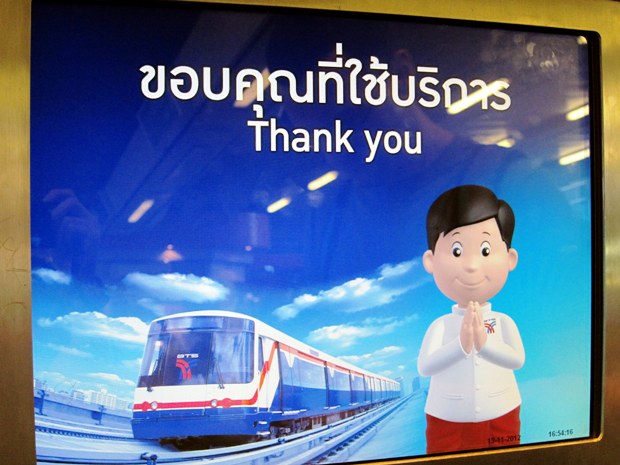 Buddhism is the pervading force of Thai culture and it permeates all aspects of daily life. The Thai demonstrate enormous respect for their king and elders, and are gracious hosts to the millions of tourists that flock to their country. But what I found most astonishing was their openness to other cultures and ideas. Inside the temples we found Hindu gods that had been incorporated into Buddhist beliefs. Outside every home and business we saw ornate spirit houses meant to offer protection, vestiges of the animist religion that predates Buddhism. Khmer and Chinese touches can be found in the temple architecture as well as the cuisine, while the royal palaces were inspired by European designs. Bangkok’s Wat Arunand its iconic towers, on the west bank of the Chao Phraya River, are actually covered in beautiful mosaics made from bits of porcelain that Chinese merchant ships used as ballast and discarded in the river. Thais have managed to borrow aspects from varying cultures and blend them seamlessly into their own, so that the result is distinctly Thai.

Had we listened to those naysayers, we would have missed out on these incredible discoveries. We thoroughly enjoyed our time spent in the rest of the country, but Bangkok holds a special place in our memories. Instead of a generic metropolis, we encountered a place that was tangibly Thai. Bangkok has found a way to develop and modernize while protecting its history, traditional cultural and devout spirituality. We left thinking not if we would return, but when.

About the Author: Cosmo Hallitan: I am an intrepid expat trying to prove that it’s possible to have fun no matter where you are, as long as you have an open mind and an adventurous spirit. I have been living in Shanghai for the past year and a half, getting to know China and exploring Asia at large.

Saving Thailand's Elephants
Savoring Samui
On Writing: Words of Wisdom from Stephen King
Freedom: Kept Together by the Bars Between Us