In July of 2010, on a two-week camping trip deep into the Mongolian countryside, we knew that our next destination, Orog Nuur, a remote Gobi lake once visited by Roy Chapman Andrews, was 2/3 full, which was the good news, and that we couldn’t get to it by the main road that ran along the north side because the log and plank bridge, the only way across the river which flowed into it from the north, had been destroyed by flooding from heavy storm run-off coming out of the Hangai mountains, which was the bad news. But we had also been told that there was a local road on the south side of the lake.

Khatnaa, my driver/guide, spotted a herder’s ger, the only one we’d seen for hours, and drove over to it. I usually just stayed in the car while he asked directions, but his time he gestured me to get out and said “Let’s visit.”

We ended up spending over two hours with Batsuuri and his family, who own 40 camels and over 300 sheep and goats. 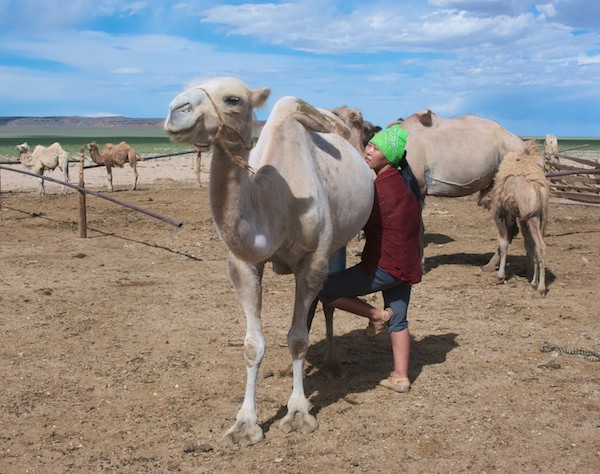 Entering their large, comfortable ger, the first thing I noticed was two boys sitting on the floor watching “Star Wars:The Phantom Menace” on a small flat screen tv. Batsuuri was relaxing on the floor and Javhlan, his wife, was just starting to make suutai tsai (milk tea). I’d drunk a fair amount of it by this time, but had never seen it made before, so I watched with great interest.

A bowl of small squares of fried bread and sugar cubes was placed in front of us. The movie ended and the two boys, both Mongol but one with blond hair (it turned out that he was a cousin from Ulaanbaatar spending the summer in the countryside), started playing with a bunch of nails they had pulled out of a bag. I watched them happily amuse themselves for over half an hour, arranging the nails in various patterns and then using a closely lined up row of them as a tiny hammered dulcimer.

At one point a wrestling competition came on the tv and I knew that we were going to be staying for awhile because Khatnaa was a BIG wrestling fan.

Javhlan asked if we would like to try camel milk airag. We all said yes. It was delicious of course. She also made a meal of rice with meat in it and we joined the family for dinner.

A special visit became even more so when Javhlan showed us how she milks the camels, seven of whom had calves. There was definitely a trick to it, since it involved standing on one leg with the bucket balanced in the crook of the other while her head was pushed into the camel’s side.

Once the milking was over it was time to leave, but it turned out that there was more than one road around the lake. Batsuuri led us part of the way on his motorbike. Khatnaa provided petrol from a jerry can he had in the car.  Once we were on the correct road, we waved goodbye and soon could see Orog Nuur in the distance.

We found a track down to the lakeshore, parked, got out, and Khatnaa announced that we had arrived at “bird heaven”. Indeed.  The shoreline had dozens of birds from one end to the other. The lake edge had even more mosquitos. I observed that it looked like we had also arrived at “mosquito heaven”, which Khatnaa thought was pretty funny. But we sure weren’t going to be able to camp there. So we moved about a hundred yards away to be out of the worst of it, put on insect repellent and set up camp.

After dinner, the mosquitos were still really annoying. We had no netting so, as usual, Mongol ingenuity rode to the rescue. Khatnaa went out and gathered a small bag of animal dung which he piled up and set smoking with a small blowtorch. We put our chairs in its path. Problem solved. Until the breeze kept changing direction. Soyoloo, the cook, came up with a brilliant solution. She turned a metal flat-bottomed bowl upside down. Khatnaa got a small dung fire going on it, which meant that instead of moving our chairs to stay in the smoke, we simply moved the smoke. We dubbed it our “nomadic dung fire”.

We sat until dark in the comforting silence of the Gobi, watching a lightning storm across the lake from us, a spectacular sunset to the west, listening to the Javhlan CD I’d brought from UB and finishing off the last of a bottle of Chinggis Gold vodka. A perfect ending to a perfect day.

One night in Kauai: All Coffee, No Plans
I Grew my Boobs in China
Huffington Post Travel: Traveling in Sin
Vagabond Choice Award: Travel Writing Contest