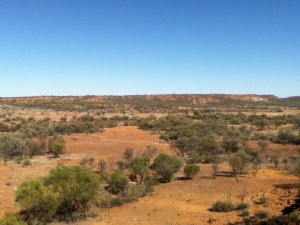 After two hours sleep, another hour or so nursing our wounds from being lost for a night in the bush and a couple sandwiches, we were ready to continue our Perentie search in earnest. Dust filtered on the breeze and through the short trees, landing on the red rocks and equally red soil. It was quiet save for the loose rocks clicking together underfoot, and the Whistling Kites which seemed to be reprimanding these two intruders with their sharp calls.  It was hard to imagine anything thriving in such an environment, let alone the fourth largest lizard in the world.

The morning was already stifling, nearly 85 F in the dead of winter. A warm breeze curled its way around the unexplored side of the escarpments, around immense boulders and out to the horizon, rattling the dry spinifex grasses as it did. Lockie and I poured ourselves into every cave and crevice, crawling into spaces barely big enough to fit, all-the-while reading the landscape for signs of the mighty lizard.

I pulled my head from a cave to hear Lockie’s voice ring out, “You might want to come take a look at this!” There was excitement in his voice. I raced down the escarpment’s edge as fast as the unstable ground would allow. As I climbed a nearby mesa, I could see Lockie’s twitching movements. He pointed to a small hole; its entrance was smooth sand. It was extraordinarily unobtrusive and I may have even over looked it had it not been for a small portion of thick yellow tail sticking out of one side. 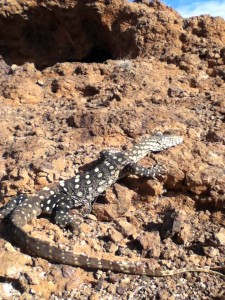 The Perentie was enormous and hissed intimidatingly as we gingerly poked our heads in the hole for a closer look. After a few moments of gentle coaxing, the massive lizard emerged into the daylight. Lockie carefully picked it up for a closer look, the Perentie dwarfed him. We judged it to be a large female based on the lack of hemipenes. She had creamy spots in horizontal rows across her back and continued down much of her tail. The last third of her exceptionally long tail was cream colored. Three deep scars from an old injury graced the base of the Perentie’s tail. Her neck was exceptionally long and snake-like, her chin was the same creamy-yellow color as the spots on her back and patterned with black reticulations. Her eyes were yellowed and held an intelligent gaze and her long, forked tongue flicked nonchalantly in and out. Robust, powerful limbs ended in huge, sharp black claws. 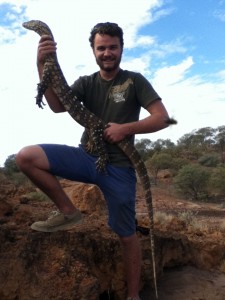 Lockie and I looked at one another, absolutely enraptured by the dinosaur in his hands. Monitor lizards, or “Goannas” as they’re known in Australia, are a holdover, dating back 60 million years and are found on only three continents: Asia, Africa, and Australia. Australia is home to the highest concentration of monitors in the world containing twenty-seven species. Goannas cover a great dichotomy of sizes from the ten-foot long Komodo Dragon to the nine-inch Short-tailed Pygmy Monitor yet maintain a very similar body type. They inhabit rainforest canopies, harsh deserts, coastal wetlands and everything in between and are one of the most adaptive, successful genus of animals on the planet.

I had been enthralled with monitors for quite some time but my love multiplied exponentially when I saw my first wild goanna, a large Lace Monitor, in a national park soon after arriving in Australia. The Perentie we had managed to find that day was the apotheosis of a monitor lizard, she was, quite literally, the queen of all she surveyed. There was very little in the Australian outback game enough to tangle with a full-grown Perentie and her demeanor showed us that fact. 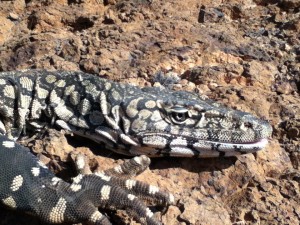 She sat on a rock in the midday sun and allowed us to photograph her for some time without the slightest hint of fear or discomfort. My shirt clung to my sweaty skin as a breeze blew across the great expanse of rocky wilderness; flies incessantly buzzed about my face, occasionally landing on my mouth or in my eyes. I occasionally swatted at them, a fairly pointless act, and they would soon regroup into their buzzing hoard. But in that moment I couldn’t have cared less because before me laid an immense lizard, the fruit of many hours of searching. 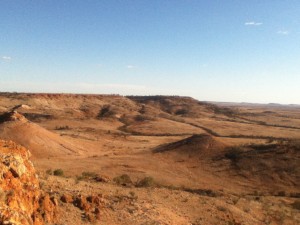 We carefully placed her back into the crack we had found her, thanking her profusely for allowing us to find her and headed back to the ute for the next leg of our journey. We sat in the cab, sucking down water, encompassed in elation and congratulating one another on the find. My hands were still shaking from the rush of adrenaline. The ute rumbled to life and we headed west on the narrow highway.
Click here to read more from Hunter including the rest of this series.

"It's Djiboutiful!" (And the Hottest New Destination)
DO YOU BELIEVE IN LOVE AT FIRST SIGHT? A story of “Love City” St. John, USVI
Turkey: Inside Out In Istanbul
Neighbors to the North - Visiting Toronto