Thank you to Richard Bangs, the Judge for our Inspiration Travel Writing Contest. YOU can decide the WINNER of our VAGABONDS CHOICE AWARD– Click here to VOTE now! And GET READY for our Independence Writing Contest with BIGGER Cash PRIZES starting May 11!

The morning next we take a hike to the Tibetan village of Nyerag, high up an unreasonably steep canyon tributary. John has been cultivating visits to the 25-family village since he started running the Zanskar, and it has made a difference. Tashi Dorje, the village leader, greets each of us with a vigorous bear hug, and then serves us Ladakhi tea (barley and salt…tasty); yak butter tea (a septic cocktail); and Chhaang (a barley beer so good it is said the Yeti often raids isolated mountain villages to drink it). Then he rolls out the Tibetan rugs, and we start to buy. He says the rugs are absolutely guaranteed, so if there is a problem, all we have to do is return it to his home in Nyerag and he will swap out, no questions asked. At the end of the trading he thanks us and says because of the rafters and their purchases the last few years he has been able to send his four children to boarding school.

My 17-year-old son Walker is on the trip, and before the hike to the village he heard tell that John Yost’s eldest son, David, had spent four years traveling the Americas barefoot. He bicycled from Prudhoe Bay, Alaska to Ushuaia, Argentina without ever wearing a shoe (http://www.ridingthespine.com/main.html# ). Walker is inspired, so has made this climb barefoot, but on the way down he steps on a series of thorns, and a sharp rock that cuts deep into his sole. He limps back to camp, bloodied and bruised, and after a round of ointments and bandages, slips back into his shoes.

The next day dawns cloudy, plunging the air temperature to a notch above shiver, but the morning float is relaxed after the successful negotiation around Jackhammer. The geology has gone insane, with hoodoos mutating into giant teeth, anticlines morphing into synclines, statra bending, breaking, folding and spinning kaleidoscopic patterns, and orogenic rocks performing acrobatics. The canyon here is more stunning than any George Wendt has ever seen; he who has been operating rafting trips down the Grand Canyon of the Colorado for almost half a century. 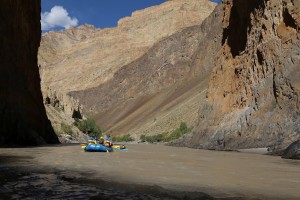 The Grand Canyon of the Zanskar, Photo by John Lyddon 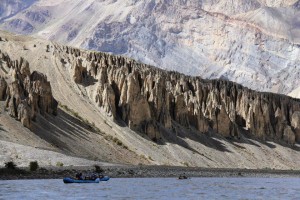 Hoodoos of the Zanskar, Photo by Brian Megaw

The rapids are large, but rolling, with long pools between the whitewater. One sports an oversized souse-hole where John capsized a couple years back, but we all make it through unswimmingly. Then the river, which has been at times a half-kilometer wide, narrows to a slot, just a few meters wall-to-wall, and the forced water is a crazy quilt of turbulence, moving boils, whirlpools, eddy fences, and suck holes. Our paddle boat is pushed against the left wall, but with some high-siding and strategic paddling, we pull away. The oar boat behind is not so lucky, and when pressed against the wall, it slowly climbs the cliff like a monkey, and flips. The guide, the cook, and three passengers, all over 60, are in the churning cold water, one pinned under the raft. The kayaks and the other rafts are quick to rescue, and in less than a minute all are safely onboard other rafts, though clearly in shock. The cook and Ollie, a veteran adventurer from Seattle, aren’t wearing wetsuits, and hypothermia is setting in. Everyone acts fast…the overturned boat is towed to the nearest beach, the dunked passengers helped to shore, a bonfire is made from driftwood, and limbs are rubbed and massaged to stimulate circulation. “It was terrifying,” says Laurel, who had been stuck under the raft. The others don’t disagree.

Though the only wounds are psychic, there is the lingering mist that things could have gone differently, perhaps terribly so. We have been unable to observe the basic hygiene of modern communications, as the Indian Army, ever alert to Pakistani aggression, allows no satellite phones, so a serious injury or accident has to be dealt with on the spot. It’s not unlike our early Sobek exploratories, when we took a country bus to the place on a crude map that showed a river crossing, blew up our inflatable rafts, and headed downstream into the unknown. Things didn’t always work out, but it was an authentic adventure, an unaffectedly nourishing journey of discovery, as this is today. In risk there is reward.

That night, after the whiskey and beer, chilled perfectly by the river, we head to respective tents and collapse in exhaustion. But sometime in the early morning rain against the fly wakes me, and I crawl out to see the river rising to within a few feet of the camp. I’ve been in flashfloods before, on the Colorado, in New Guinea and in Africa, and watched helplessly as vital gear washed away. Once, on the Omo River in Ethiopia, an ammo box with a camera inside was torn away, only to be discovered on a beach a year later with a bullet hole through the top. Apparently a local found the metal box and couldn’t figure out the latch, so took a shot instead. But the camera inside was dry, and the pictures developed were catalogue-quality.

So, I stand at the river’s edge watching the river rise, ready to alert the camp if it laps too high. But the rain stops, and after a spell the water starts to recede, and I head back to the warmth of my sleeping bag.

The final day begins calmly, floating into a canyon so blunt and stark it looks as though they could have filmed the moon landing here. John has assured we are through the worst of the rapids, and it is a sail to our take-out at Leh. But within a few minutes of launching there is a shrill whistle. The guides all carry whistles, and used them during the capsize, the runaway raft, and when approaching big rapids. But with a quick glance to all the guides it is evident none is holding a whistle to his lips. Then, Kaboom! It sounds a bomb has been dropped, an avalanche triggered, or Pakistan has attacked. Everyone ducks, and then peeks up to see an explosion of rock and dust fly across the river just 100 meters downstream. It is the road construction team, trying to blast a route from Leh to Padum, to where the downstream crew stopped at Jackhammer two years before. Not many boaters pass here….more people have climbed Everest than have rafted the length of the Zanskar…so the blasters did not expect us. But, still, it is a reminder how thin the line runs here, and we all rush to propel the boats through the settling rock powder to beyond the blast zone. 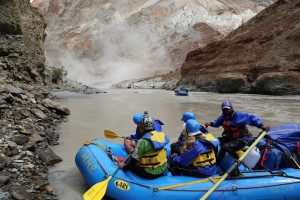 Road blasting across the Zanskar, photo by John Lyddon

At the confluence with the Indus we look downstream towards Pakistan, where John Yost and I made the first descent sometime back, with an equal share of close calls (see: http://www.huffingtonpost.com/richard-bangs/the-pakistan-osama-bin-la_b_861049.html ). But the border, of course, is closed, so we head upstream to Leh and clean sheets and hot showers. At dinner we toast our “zurvival,” but then hear some sad news. A Swiss kayaker, Ian Beecroft, not far behind us, drowned on the Tsarap, the river that joined us at the Doda to form the Zanskar, just a few kilometers from where the monk met me on the road to Padum.

How to Write a Bad Travel Story
Skiing In Austria with the Family
London Callings: Originality counts?
L'Ile de Noirmoutier, In Search of The World's Most Expensive Potato