Tzintzuntzan Cemetery, Mexico: A Night Among the Dead 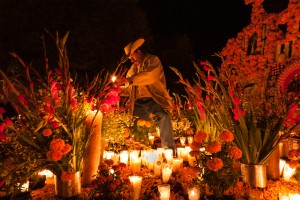 Maria and her baby brother Eugenio lost their mother in April this year. The twelve-year-old purepecha girl holds him on her arms while their grandmother places cempazuchitl flowers and lighted candles on top of their mom’s grave. Midnight is approaching and temperature is rapidly dropping below the freezing point. A cold drizzle has transformed the ground into a thick red mud, making it almost impossible to walk. Despite the weather conditions the family tells me they will not move from the tomb until morning. A picture of the young woman stares at us. She is now among us. It’s time to be quiet.

Indigenous people of Mexico and Central America believe that on the night of November 1st the souls of their beloved ones descend to earth to be with them once again. They place offerings on the graves of the dead to please them and guide their way back from the spirits’ world to earth. This belief, whose origins can be traced back 2,500 years, has one of its most genuine expressions at Tzintzuntzan graveyard, in Michoacan State, where a large community of Purepecha indians safeguard their ancient traditions and are reluctant to accept the intrusion of the modern world into their lives.

Visiting Tzintzuntzan cemetery on the Day of the Dead is something I had been wanting to do for a long time but have avoided because of the intense violence at the region inflicted by drug cartels. It’s not safe being here today. I don’t feel any relief from the presence of a military operation consisting on, at least, forty soldiers armed with Browning M2 machine guns and M40 tanks. They have orders to protect the 20,000 estimated tourists that are visiting the town this day but because of the army’s reputation of corruption and complicity with crime they are making me feel more anxious than safe.

The air is dense. A mixture of woodsmoke coming from bonfires, burned incense and copal, and candle smoke makes it hard to see and dries my eyes. Despite the darkness of midnight the cemetery shines with an orange glow. Cempazuchitl flowers, with their tangerine color like sunbeams, are believed to guide with light the way for the spirits back to us.

The decoration of the tombs is nearly done. Entire families have been setting out the traditional paraphernalia since yesterday’s morning. It’s hard work. Pan de muertos (bread of the dead), mescal, beer and tequila, salty and sweet tamales, bananas, apples and guavas, orange cempazuchitl, white gypsy and purple cockscomb flowers, lighted candles, Christian crosses, framed pictures of the deceased, the murmur of prayers, mariachis, yellow confetti, sugar skulls, and the omnipresent Coke create a cornucopia of colors, sounds and smells, each with the purpose of either pleasing or guiding the deceased back home on this freezing night.

Every epitaph is handwritten and misspelled. Indigenous people of this region have historically been ignored by the government and their schooling isn’t long or good enough to learn how to write. Many of the deceased are children whose deaths could have been prevented in the first world. A vast quantity of the graves belong to very young men. I wonder how many of them were victims of the cartels.

Each tomb has a picture of the dead. There are grandparents buried together, young mothers, babies, wives, sons and daughters, siblings. Most families seem to accept the death of their beloved ones and happily celebrate around the tombs with dinner, alcohol, laughter, mariachi music and good old talk. Nevertheless and despite this joyful celebration of death being deeply rooted in Mexican culture, there are a few people who don’t seem to be happy at all.

There is a man holding his newborn baby in his arms, staring at the picture of his wife. He doesn’t look away, he isn’t distracted by other families’ celebrations, and he doesn’t even notice my presence. He just stares at his beloved one and talks to her in silence. Sometimes he closes his eyes and prays. Tears roll down his face. I read the epitaph: she died last month while giving birth.

Octavio Paz, the Mexican Nobel Laureate, once said that for Mexicans death isn’t the end of life but the next phase of an infinite cycle. The opposition of life and death isn’t as absolute for them as for other cultures. Life is prolonged in death.

For me, an atheist who doesn’t believe in spirits that come back to earth, the Day of the Dead still signifies something: it’s a reminder. Today I’m here, celebrating above the ground, but soon I’ll be immobile below. When that day comes I can only hope to be remembered like this by the ones who once loved me.

About the Author: Despite being 5’2’’, Ana Lenz isn’t afraid to travel all by herself. She began writing stories from the moment she learned how to write. Since she discovered she could combine her passion for writing with her passion for traveling, she quit her 9 to 5 job to work as a freelance travel writer.

Dharamsala, India: Goodbye
Nigeria, My Country: What it means to me
Gratitude in Stone: The Pantheon, Paris
Australia: Travelling on the Indian Pacific

4 responses to “Tzintzuntzan Cemetery, Mexico: A Night Among the Dead”