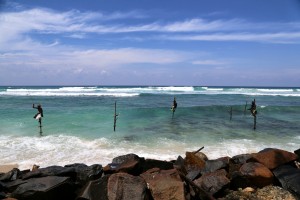 Have you ever wanted to go somewhere that you have never been but have no idea which destination to choose?  You just point to a place on the map and go right?  This is exactly how I ended up white knuckling the rear door handle of a car in downtown Colombo, Sri Lanka.  From the moment I crossed the threshold at Bandaranaike International Airport into the oppressively heavy air of Sri Lanka, the world blurred and moved in fast forward.  I was led to the taxi that would take me to my first stop of the trip and we were under way.  Three minutes into the ride, I was thankful for a driver that knew what he was doing.  I could instantly see opportunities for death around every turn were the streets filled with tourists.  Instead, they were filled with tuk-tuks.  These are three wheeled motorcycle cars that are more affordable than your everyday sedan yet much less stylish.  Colombo is also where I learned that a 125cc motorcycle doubled as a vehicle for a family of four with an age range from three to seven years old.  Oddly enough, only the adults seemed to wear helmets.

About a 55 minute drive from the airport, and I reached the hotel, though I planned for a five minute drive thanks to the person on the phone.  Due to the miscalculation, five minutes of overly hot water and a towel that would not get me dry no matter how hard I tried and was on the road again.  My destination was Yala National Park on the eastern side of the Sri Lanka.  As I settled in for the seven hour drive, I felt adrenaline slow, adjusting to the speed of things happening around me.  Thanks to my driver giving me the grand coastal tour however, seven hours was another major miscalculation.

Our first stop was at the sea turtle hospital in Galle.  Sri Lanka is home to five of the seven recognized species of sea turtles.  The shelter finds the eggs, hatches them in a safe location, and returns the babies to the ocean to avoid people poaching the eggs.  There were also several injured turtles that had been saved from nets and boat accidents in the tanks.

From here, it was on to our next stop just south of Galle where I got to photograph the Sri Lankan stilt fishermen (see image below).  These fishermen wake up every day and swim out to their stilts (sticks entrenched into the sea floor) where they sit and fish for coral fish.  The cousin of the men said that these stilts were handed down from father to son for generations.  While the fish do not fetch an incredible amount of money at market, they are food enough to feed the family.  I finished photographing and was back in the taxi for the duration of the trip to Yala.

Upon arriving in Yala, I met with my camping host and tour guide.  Though I was late by three hours, they decided there was still enough light for an evening animal safari.  It was on this safari that I viewed my first ever wild “big cat”, the leopard.  Yala National Park is home to one of the largest populations of leopards in the world.  While this statement makes it sound like leopards are in great abundance, the truth of the matter is that Yala has approximately 35 leopards, truly sad for being one of the largest leopard populations in existence.  The next few days of my trip were spent roaming through Yala National Park to see and photograph many of the various types of flora and fauna.

As my time drew to an end, I was able to visit Udawalawe National Park.  Udawalawe has a reputation for its vast numbers of Sri Lankan Asian elephants (200+).  I was also fortunate enough to visit the Elephant Transit Home Orphanage.  The orphanage is home to juvenile abandoned elephants that are found and reported from all corners of the island.  The elephants are raised and encouraged to refine their natural instincts until they are old enough to be released back into the park.  Upon release, they are collared with giant radio transmitters to ensure that they are adapting to their new life in the wild.

While I was sad to depart from my new friends and Sri Lanka, visiting truly made me appreciate the things that I have.  Sri Lanka is seemingly a poor country.  Though its citizens make do, I could see that it was a very hard way of life.  All of the people welcomed me with open arms and lots of food!  From not knowing where to go, to not wanting to leave, Sri Lanka definitely ranks within my top 10 list of amazing destinations.

About the Author:  Paul Freitas is from Salem, Oregon in the United States but has been working as a contractor in Afghanistan for the last 4.5 years.  He is currently attending classes for travel photography at MatadorU and is also working towards a degree.  He can be reached on Facebook at or on Twitter.