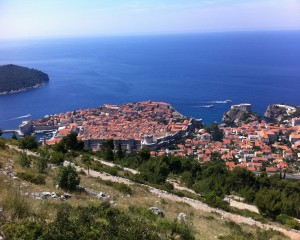 I’ve only been to Dubrovnik twice in my life: as a child, when I lived in Bosnia and visited it during a field trip with my 2nd grade class, and as an old adult, only 2 years ago. The beauty and history of the Old City fascinates me to this day. Not only is it a great – and very affordable – place to vacation during the summer, but it is also a historical landmark, one that even Napoleon conquered some few hundred years ago. And that’s just one of the ways it inspires awe in me.

Located on the Dalmatian coast in the Adriatic sea, Dubrovnik is Croatia’s most famous tourist attraction. Every year, hundreds of thousands of people from all over the world travel to it, exploring its endless wonders: its crystal clear ocean water, its fabulous beaches, and the prestigious Old City, which deserves a label as one of man-made Wonders of the World. Upon my last visit to Dubrovnik in the summer of 2011, I was impressed by how much it had changed from the way I remembered it as a child: it seemed to be an international city, with all sorts of languages spoken at every corner, and it appeared to be bigger, even though it probably wasn’t. The wide diversity of people I saw during my week of stay there was beyond belief, and it made my holiday that much more special and memorable. It felt as if I was travelling through the entire Europe, and not just one city in Croatia.

Because Dubrovnik attracts so many people of different nationalities, it will naturally have a wide variety of restaurants. If you want typical Croatian food, you will find it on every corner, and naturally so. Or perhaps you fancy yourself a pizza? Well, in Dubrovnik I’ve tasted some of the best pizzas in my life. They follow the recipe, ingredients and crust type of the original pizza from their neighbors across the Adriatic Sea: the Italians. With that kind of inspiration, you know you can’t go wrong, especially when the menu offers at least 30 different types of pizzas. Everyone will be able to find their pie of choice.

The Dubrovnik sea is a special kind of sea. It is surprisingly crystal clear, pure and on a cloudless sunny day – which in Dubrovnik is most of the time – it reflects the sky so perfectly that even the most gifted painter would be envious of its appearance. The water’s temperature is always pleasant and warm, and the sights and sounds it produces as the waves splash onto the shore are a perfect lullaby for the traveler looking to nap on the beach while tanning.

There are also plenty of cafes and bars, and often right on the water. I sat in a bar outside of Dubrovnik’s Old City, and as I drank my beer while watching the beautiful islands in the distance, I noticed that many of the patrons were swimming in the water, just 20 or 30 feet away from where I was sitting. Envious of the joy they were having, I put my beer down, took my shirt off, and joined them. Eventually I found out they were also from the United States (Atlanta). When we got out of the water, we had a beer together, and talked about the elusive beauty of this great destination. Why is it that more Americans don’t talk about Dubrovnik as one of the major cities to visit when travelling in Europe? We vowed we’d spread the good word as soon as we got back, because no place this unforgettable should go unnoticed by so many.

Dubrovnik was, is and always will be a place that inspires awe in me. It is a city that I could – if my schedule and finances would allow me – visit at least once a year, during its busy tourist season. June, July and August are excellent months to go there, for not only is the weather perfect, but there are also numerous summer festivals, events and other festivities to be a part of. Dubrovnik may not officially be a World Wonder, but for me it always will be just that, and much more.

About the Author: Armand Diab is a 35 year old former Corporate Video production freelancer who graduated from Columbia College Chicago in 2002 with a Bachelor’s Degree in Film & Video Production. He is currently teaching English in Shenzhen, China. He will be there until the end of June 2014.