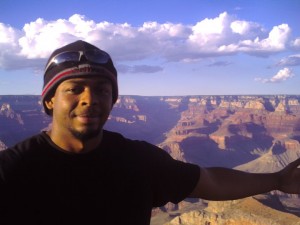 What’s a great way to end a summer? How about a road trip?
Three college roommates, with two weeks of unconstrained time ahead of us, sat and contemplated an idea made on a whim.
“That’s a great idea, actually!”
A single confirmatory response was enough to form a consensus. We did, however, saw a need to discuss logistics, and through some deliberations we decided to make visits to major natural sites.
We flew to Chicago, to a roommate’s home, and spent a day filling our roommate’s Chevy Cavalier with an old tent, bags of chips, water, and stacks of beef jerky, among other consumption items. We planned a two week trip that would take us through the American Mid-West, down through Wyoming, then across to California, down the west coast, and across to Arizona before traversing back to Chicago. 2 weeks, 15 states, several majestic sites, and 1 awe inspiring encounter with one of nature’s masterpieces – the Grand Canyon.
Remarkable as the other sites were, this one stood above them. Expansive in size, breath-taking in view and awe inspiring in thought. The canyon greeted us with its many sanguine ridges. The Grandview Point provided our first gaze upon the sheer span and depth of this creation. We were saturated with awe, which had us staring for minutes on end, with a child-like sense of wonder. Nothing could prepare us for this overwhelming presence, which gave such life and character to what may appear to be just a collection of sedimentary deposits. We decided to descend and see how much of this masterpiece we could explore.
We entered the Bright Angel Trail, and passed through a stone tunnel which appeared to be a hole dug through a ridge to facilitate the trail. As we passed through the tunnel we encountered a park attendant sitting in khakis, apparently writing in a log book. He greeted us and solicited information on our hiking experience, of which we had virtually none. He inquired about our water supply and informed us that
“…the ascent is about twice as long as the descent.”
This he made very clear to us. I imagine he was there to keep track of the trekkers on the trail. Certainly this canyon had the bowels to devour inexperienced trekkers.
The trail was easy on the descent, despite the scorching heat and the arid climate. We meandered down for about an hour and a half, before we realized that our water supplies needed to be replenished. We felt we could go further, but I reminded my friends of the park attendant’s advice.
“At this point we would need three hours to get back up.”
We were some distance from the trough of this trail; however, we were clearly not prepared for the full journey today, so we decided to ascend at this point. This would prove to be a prudent decision, for the journey up would surprise us with its difficulty.
The descent was easy, and the points that were easiest (steepest) would be the most difficult during the ascent. We sauntered down and did not stop at any point, but gazed mindlessly at the living tapestry that surrounded us. However, on the ascent we would need several points to stop and stretch our legs. At these points we had even more time to take in the picturesque panorama. No matter how many times we looked up, down and around, the feeling was always:
“Wow.”
About half-way back up the trail and the feeling of wow was coalesced with a feeling of ouch. Our quads and calves began to burn, and we now had to rest at smaller time intervals. The Grand Canyon would not just woo us, it would also work us.
We continued to ascend, stopping and stretching as we needed, until we came to a pipe stand. We refilled our bottles, drank and refilled our bottles once more. Then we came to the final left turn, and we passed the park attendant once more. We glanced at each other, and I suspected he realized we bit off more than we could chew. Well, at least he was able to check us out of his log book. That was good for him, and very good for us.
We went through the rock tunnel once more, and now we were back on leveled ground. We stopped to stretch for the last time, and then took another long, deep look at this majestic creation, crafted from nature’s hand. So majestic was this living art-form that I must revisit here. Next time, however, I will not just go deeper down into the body of this extraordinary being, but I will also make sure I am well prepared for the ascent back to normalcy.

About the Author: Robert Stewart. I am currently a MSc level student in Finance, with a keen interest in expressive writing. I have had several opportunities to visit exciting and interesting places such as the Highlands of Scotland, and several great natural parks and sites in the USA. The presence of the Grand Canyon is still etched in my mind, and I enjoyed writing on this experience. I anticipate doing more travels in the future, and sharing my encounters via the written art form.

Who is a cruise expert for Travel and Leisure? Lisa Niver
Is Japan One of Your Places To Love?
Munchausen Syndrome and the Oregon Coast
Travel Events in Los Angeles