Our Thailand adventures in 2008 including meeting Alanna and Atom at the falafel cart on Koh San Road in Bangkok. George and I met so many wonderful vagabonds, travelers and explorers on our journey. We will be bringing you more and more of their stories on our expanded site. Enjoy Alanna’s adventure: 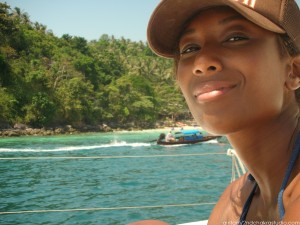 The journey started in Mae Sai (the northern most tip of Thailand) and the plan was to ride down to Phuket. We were not even halfway along the journey and I’d already developed a schizophrenic relationship with my bicycle and the journey; both loving it and hating it simultaneously.
We woke up early, packed up the tent and strapped all of our belongings to the back of our bikes. We were about two weeks into the journey and all I could think about were hot showers, chocolate cake, and if I’d make it another nine hours on the road. Without saying a word, we ate some left over fruit from the night before and headed off into the dark of the morning. We wanted to make it to Sukhothai before the sun went down. We had roughly a one-hundred and thirty kilometer day ahead of us. And I prayed we’d agree to get a guesthouse with a hot shower when we got there. 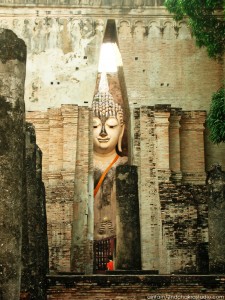 There is no better way to experience a country than to go through it slowly. I felt sorry for the people who passed us in buses who didn’t get to meet the people we met, eat in their houses and hear their stories. The beauty of the land in between cities was not trampled on and consumed by thousands of unconscious tourists. It was revered and gazed upon in awe with each push of my pedal. It was what kept me going. Let me back up a bit and say, I’m not a cyclist. This journey was the first time I had really been on a bike in over twenty years. God, that makes me feel old. Anyway… I digress.
Just before the light of the new day made it’s way onto the road, we made our way down the hills passing monks gathering their daily alms. The people starting to appear more and more with each mile we pass. I breathe the fresh, morning air in deep into my lungs and smile at the simplicity of life. Children in identical uniforms laughing on their way to school; old women meeting at the local shop to exchange gossip from the day before; men leaning on their sawngthaews getting ready for the daily shuttles. I loved this -the shear ease in which people carry on their lives here. There’s no rush or need like in the city. There’s plenty of time to greet the neighbors, and send the kids off to school with lunches of rice and colorful drinks in plastic bags. 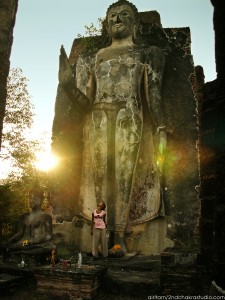 This trip has made me put a lot into perspective about my life. And for a moment, I quietly celebrate my determination and strength to ride another day. It’s not easy. My body is in pain. I haven’t showered in days. We’ve been chased by dogs, stared down by locals, and come close to being road kill by mad truck drivers countless times. And yet, every day, I agree to get back on the bike and do it again. I don’t have to. I can easily hop the next train down to Bangkok and take the quickest flight to Phuket to sip cocktails on a beach for the remainder of my time in Thailand. But I don’t. I get on the bike and agree to another day of chafing on my ass. It’s possible I’m riding as far and as fast as I can to get away from all the things I left in California; a pending divorce, my abandoned career in advertising, my perfect little home in Orange County that houses my perfect little car and the perfect golden retriever. Now, I don’t mean to sounds ungrateful. I really appreciate that life. But it just wasn’t… me. And the longer I stayed in it, the closer I got to losing myself completely and possibly for good. I didn’t belong in the life of the constructed and clearly defined. I felt stifled, lost and trapped. I felt more dead than alive. And I knew not so deep down, and quite close to the surface is an explorer. I knew there was more to living than the safe, sterile life I was given. I am a strong, capable woman with an instinctual desire to feel deeply, love completely and experience life in a way that I never knew.
The cool, blissful morning ride quickly turned into a blistering hot afternoon. These were the times when I would start cursing to myself. “Shade… what I wouldn’t do for a bit of shade.” Speaking of shade, by this point, my skin had darkened to that of dark, melted chocolate. And that seemed to be a never-ending source of amusement for the locals who loved staring at me and touching my skin. 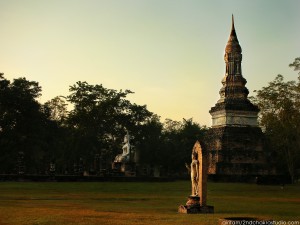 We pedal harder focused on getting to Sukhothai before the sun goes down. Passing rice field, after rice field, we wave to the farmers as we go by. We stop once or twice for roadside fruit stands and a freshly cracked coconut and then back on the bikes. Many hours into the day, I start to see signs for Sukhothai.

As we near the city, I keep my eye out for cute guesthouses to crash at.  We pull into the Ban Thai Guesthouse that was clean, affordable and perfect for a night or two. It even had hot water. Score!! We drop our stuff in the room and jump on the bikes to make it to the national park before they close. We ride in just as the setting sun reflected in a lotus pond behind a giant Buddha. And I forgot my aches and pains. I forgot my need to eat or to take that hot shower. My eyes settled on the most beautiful moment I have ever seen. The feeling of this place is big powerful and peaceful. I feel grateful to have made it here and to be greeted by the halls of these temples. The large Buddha looks down on me and seems to nod his approval for my perseverance. I smile as I look forward to the continuing journey.
Sukhothai was the first capitol of Siam. It gained independence from the Khmer Empire in 1238. The kingdom was rich and powerful and had a large reach from Luang Prabang down to the Malay Peninsula. During this time, Theravada Buddhism became the widespread religion and King Ramkhamhaeng developed the Thai alphabet. It is said that the king was a great ruler and the people thrived under his rule. Today, the Thai people generally regard that time with much reverence. The city is filled with about 45 sq km of temple ruins. There are hundreds of Buddhas and chedis (a monument similar to a stupa). Some of the Buddha statues are giant like the one in Wat Sri Chum, built over 700 years ago, reaching 48 ft in height. And that’s sitting down. Other temples, like Wat Mahathat, contain hundreds of chedis, huge ponds, and large, peaceful Buddhas. Due to the size of the national park, its best seen by bicycle (and that’s not because I’m biased). On foot you’ll never make it through the day. By car, you’ll miss so much along the way just to hop out take a picture and get back in. A big part of the experience is to really soak up the energy and feel the still lingering majesty of this old kingdom and still make it back to your guesthouse in time for dinner.

Note from Lisa and George: We hope you enjoyed Alanna’s post! Let us know and we hope she will share more with us here! Find her at http://www.2ndchakrastudio.com/ Feel free to add your comments below!