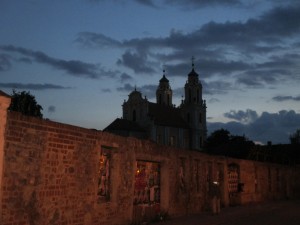 We had only this: a course pack, a name, and a story. We scattered ourselves across the steps of the neo-classical Vilnius Cathedral, forty men and women in backpacks and light jackets from varying pockets of the world. Montreal. New York. Saudia Arabia. Japan. We stole surreptitious glances at one another, trying to pair names with faces, faces with nationality. Was the woman with the red hair Bridget of the cowboy story? Was the tall man with the thick black hair Pablo of the Spanish one? As we gazed across the wide cobblestone expanse of Cathedral square to distant castle tips and belfries, rollicking hills and medieval architecture, one thought pulsed repeatedly through our minds. Where were we?

We had come to Vilnius for the same reason. The two-week Summer Literary Seminars was a program designed to bring writers from disparate cultures and societies together. To immerse them in a culture so foreign, an environment so far from the grind of everyday life they began to dislocate, enabling a unique literary space for creative minds to flourish.

Our paths to Vilnius were varied. One woman had flown from South Dakota to Warsaw. Another woman had departed Pennsylvania to Prague, where she joined up with a group of lively backpackers. While the majority of us hailed from the US and Canada, it seemed we had all maximized our trips to the Baltic, crossing through places like Latvia and Belarus before settling in the Baltic’s southernmost country.

We wondered: what would we find in Vilnius? 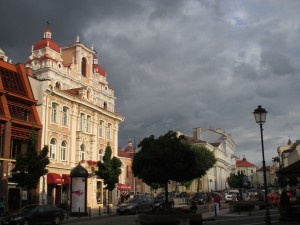 I had pictured a small European town straddling the border between East and West European culture. I pictured a few key restaurants, an abundance of churches, deep leafy parks. A bar, maybe two. I saw long nights spent writing under the cover of lingering Soviet-era darkness, holed up in the steel-walled studio apartment I would rent. Certainly, I thought, Vilnius would be a good place to unwind, to buckle down and write. I contacted a friend who had taught in Poland a number of years. She had been to Vilnius several times. You must go, she wrote immediately. Vilnius in the summertime is breathtaking. You will never forget it.

It was July fourteenth when I rolled my suitcase to Vilnius Street Apartments, a neat two story building tucked away in the heart of Old Town Vilnius. Volkswagens, old BMWs and Audi station wagons zig-zagged the lot. Graffiti covered the alley archway and the apartment walls. I hesitated: back home in Detroit graffiti was married to danger, to violence, to abandonment and decay. But in Vilnius, I soon learned, graffiti was a form of art, the messages uniquely beautiful. Though it was well after ten pm the sky spread a glorious pink over a landscape so still and pure I wondered whether it was real.

Eager to learn the ropes of the town I set off to explore. I worried briefly – it was late Sunday night, would I be the only one on the street? I had no cell phone and no recourse were I to be accosted by a Lithuanian, Russian or other-language-speaking criminal.

Anything I thought I knew about Vilnius soon turned on its head. Vilnius was a place of heady energy. No further than one block in either direction of my apartment found me in the midst of an eclectic, vibrant East European city evocative of Italy or Spain. Young people spilled out of bars along Vilniaus g., smoking or simply enjoying the temperate summer evening. An ubiquitous techno beat wafted from open doors and windows, encapsulating passerbys with an energizing vibe. Cars sped down narrow cobblestone streets, inches from old town sidewalks, thin ribbons of concrete bordering three-story buildings of Medieval, Baroque and Soviet influences.  Several streets were closed off entirely, transformed into lazy sprawling terraces.  Restaurant after bar after restaurant saw thin, leggy, well-tailored women and men enjoying wine and good conversation under the wide open sky of the best three weeks, weather-wise, of the year. 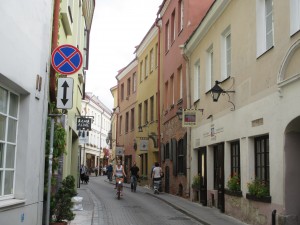 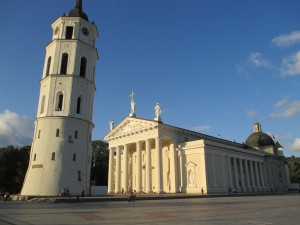 Each day in Vilnius revealed another layer I was eager to explore. There was never a shortage of things to do, from the art museums to the cathedral tours to the famous castle of Trakai. It began to feel surreal; the lovers strolling through the parks, the winding roads and ancient stone architecture, the choirs I sometimes heard from second story windows, like angels waiting in the wings. The food was delicious and as varied as you desired. I dined at traditional Lithuanian establishments as well as Italian, Indian, Mexican, Chinese, and Vegetarian. Each spot was utterly unique, from dim swanky ambiance to casual coziness to spaces as far-reaching as low stonewalled grottos. The food was more than affordable, the abundance of cheese and cheap wine heavenly. 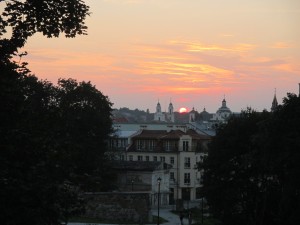 In lands of northern light, they use words like nautical twilight and civil twilight, as if to delineate light from less light, as if to replace the absence of that dark midnight cover of the rest of the world with something as equally comforting. In Vilnius, I couldn’t trust the sun to tell me the time, much less anything else, high noon falling after one o’clock, the sun clinging to the edge of the earth until after eleven. The dark of night I was to write under didn’t exist. I didn’t sleep much during my two week stay, and I didn’t want to. The city awaited me – the old and the new, the east and the west – in all its mysterious wonder.

Climbing the Giza Pyramids
Botin in Madrid - Dinner at the oldest restaurant in the world!
Part 5: Thank you to WSGT contest participants!
Have Rewards, Will Travel- Best Airline Reward Credit Cards