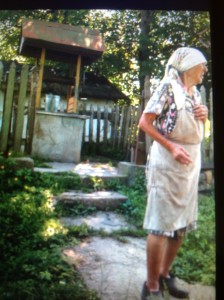 We looked for old people; we found them on a quiet road, standing near a well, ready to draw water. They were short, thin people; the woman wore a kerchief over her grey hair, accentuating the multitude of wrinkles on her face. She had a greying cloth apron over her top and skirt. The man wore a short sleeved blue cotton shirt, beige trousers, and a plain beige cap. Their clothes were soiled, appearing to reflect their daily toil.

I pulled out my book and carefully intoned the words my friend had translated prior to my departure. “Jibes kladbishe”. “Jewish cemetery”. After a short pause, they both smiled and spoke simultaneously, in Ukrainian, very rapidly, with accompanying rapid gestures. I stared blankly. My grandparents had grown up in this town, Chotyn, located in the southern part of the Ukraine, had gone to school and married here, but they left to Canada in the 1920’s, before my mother was born. They had quickly learned English, and my mother, and then I, did not learn Russian from them. I had no idea what these people were saying to me.

My grandparents spoke often of the town they came from, and I grew up thinking of it as a magical place I could never visit. The Ukraine was swallowed by the USSR, for many years people could not leave, and westerners, especially Jews, would have had to be crazy to try to go there.

But Eastern Europe has changed, and less than a year before finding myself with the old couple near the well in the summer of 2011, my husband Avi by my side, the Ukraine opened its borders. It now no longer requires a visa for visiting Americans. Most tourists fly to Kiev, or travel by tour bus from Poland. My husband Avi and I arrived by car, in a long term rental that the company allows to take into Eastern Europe.

We entered at the southern border of Poland and the Ukraine, after more than a two hour wait to get through the chaos of the border crossing. We saw a large sign in Cyrillic proclaiming we were in a new country, and the smooth, multi lane highway of Poland changed to a two lane, poorly paved pale grey ribbon of a road full of potholes and bumps. Our GPS directed us.

We turned onto a lonely country road, the slim grey ribbon snaking before us, meandering lazily through rolling hills, small towns, people talking and walking and barely paying attention to the French car in their midst. We were on our own, without a guide, a chaperone, a guard, anybody watching us, traveling independently with the rise and fall of the road, the bumps, the simple villages, and the beauty of a semi-developed land. 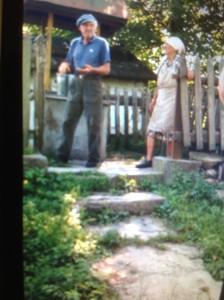 He directed us to a rutted road that ran through a grassy area off the main highway. He left us to walk back to his wife. On our left was an old fence, more a pile of bricks about a foot high, with interlacing wires extending a few feet above the bricks, than a barrier to keep people out. I peeked through, and saw what appeared to be well maintained paths that led to marble tombstones with pictures and inscriptions. We entered.

The cemetery seemed to be divided into two parts. The area near the fence through which I had gazed, contained navigable paths, that meandered between tombstones of varying size; large, marble tombstones with clear, delicate Hebrew script, smaller markers that were still standing, and fallen stones. I looked, bud did not find tombstones with my family’s names.

The front area ended abruptly at an impenetrable mass of trees, bushes, branches, scrub, and broken remnants of tombs. There was no access.

I did not find signs of my ancestors that day in Chotyn, did not see any resemblance to the images my grandparents had painted of their Jewish shtetl, but I found peace in being able to find my own freedom in a land that was once so oppressive to my family.

About the Author: Rona Amichai lives and works as a speech language pathologist in Los Angeles, USA when not traveling the world in search of new adventures and stories.

Who are the 2017 Award Finalists for Independence?
Scottish Coast: Fringed with Gold - Fish 'n' chips
And the Winners for the 2017 Independence Travel Writing Award
Switzerland: Hiking the Eiger Trail