Turkmenistan: The Gates of Hell 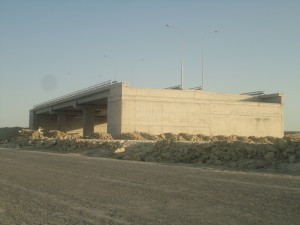 Surely there is nothing that can make a person feel more independent, more truly in charge of their own life, than the opportunity to drive around one of the most closed and unknown countries in the world. Separation from civilisation won’t always and doesn’t necessarily make a person feel free, but this is my story of how it can.

Other than an intermittent convoy of trucks it was just us, the sand dunes and a few patches of ankle high shrubbery as we drove through the Turkmen desert towards our most anticipated destination on this epic drive from Australia to Scotland. We had been given directions, sort of, but considering the lack of landmarks, signs or even roads, we were prepared for a struggle in following the laughably approximate instructions.

Just after the not so charming town of Darvaza which had been demolished on command of the President because he “didn’t like how it looked”, a beautiful modern road bridge stood alone beside the road. Complete with barriers and street lights, we came to the astounding realisation that there was no way to drive on or off of it. In all its cemented glory this completely impractical piece of infrastructure was a fitting reflection of the bizarre state of Turkmenistan’s progress. 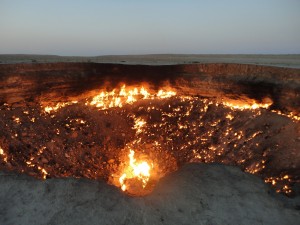 A couple of kilometres down the road from this memorable example of modernity a dusty sign pointed west, and opposite the sign a variety of tracks led towards the sand dunes to the east. Following the tracks we crossed a small ridge at which point the tracks disappeared and we proceeded to spend the next couple of hours skidding through sand dunes, driving backwards and forwards and around in circles, unable to find what we were looking for. Just as we were about to give up on yet another route and do yet another u-turn, we spotted a boy on a bike up ahead.

When we asked for directions he knew exactly what we were referring to and pointed us back the way we’d come. Starting to feel like we were on a wild goose chase, we were relieved when he asked if we wanted him to guide us there. Of course we did! For a fee. Darn. We were ready to pay him 3 Manat, but to our disappointment he laughed at our offer and asked for 70 Manat. No thanks. We headed back and this time we decided to take a narrow ridge which dissected two sandy mounds. Reaching the crest, we descended the other side and were instantly struck speechless by the fierce glow emerging from the giant flaming crater that was suddenly visible on the plain in front of us. We’d made it! 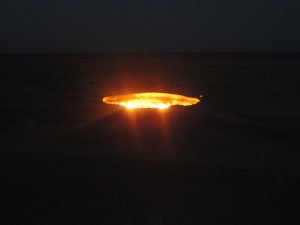 Completely awestruck, we stopped the car and ran down the valley towards the flames. As we neared the edge of the crater, the enormity of this unnatural phenomenon baffled us. In 1971, during the reign of the Soviet Union, a failed exploration of Turkmenistan’s vast natural gas reserves had resulted in an explosion and thus, a crater. The amount of gas escaping from the ground was more than they’d experienced before, and hoping to curb its seeping into the air, they set it alight, but with no grasp of the sheer quantity that was bleeding from the ground, it hadn’t just burnt off as expected. Now this giant crater, 70 metres in diameter, had been on fire for over 41 years.

Instinctively drawn to the unguarded edge, perfectly aware of the imminent danger yet disturbingly immune to the fear, we saw for ourselves the reality in the imagery of the name colloquially given to the crater – “The Gates of Hell”. One gigantic flame swirled out from the centre of the hole, curling several metres into the air, while smaller flames seeped out from cracks in the rocky walls, blurring in the haze. We watched the burning crater all evening, from dusk to well into the night, amazed by the intensity of the colour against the night back drop. The heat was intense, and along with sand from the desert floor, it caught in the wind and threw itself at us, making for an uncomfortably dusty evening. Everything else paled into insignificance though to the sense of elation and unending freedom that enveloped us thanks to the red glow rising from the earth in front of us. 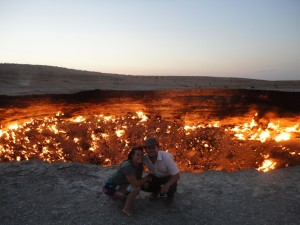 I cannot stress the awesome sense of independence that being completely alone with this unique scene brought; for the vast majority of the time there would not be a single soul present at this crater. It brings to mind the old adage of whether the tree falling in an empty forest still thuds as it hits the ground. Does the burning gas crater still burn if there’s no one there to watch it?

Romania: Orşova, My Love…
And the Winners for the 2017 Independence Travel Writing Award
Letting out the Italian
Australia: Fishing for Zen

7 responses to “Turkmenistan: The Gates of Hell”