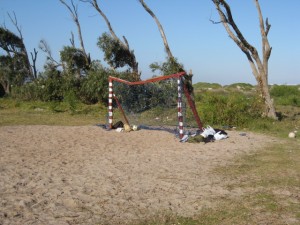 Two years ago I boarded a plane by myself to South Africa. I ignored my friends who called me crazy, and as much as I appreciated the concern from my family, I did not hesitate when I pressed the confirm flight button.

Two weeks later, I found myself staring out the airplane window, minutes before take-off, wondering if…”maybe I was crazy?” It took all of two minutes, and the plane to take-off, for me to convince myself this was the exact thrill I needed after graduating University.

With 25 hours of travel time ahead of me, I started to think of what was in store for me in the next four months. To be honest, I only knew of a few things: I’d be living with 18 to 25 strangers from all around the world, in a small living space, and that I’d be volunteering in a township coaching soccer to underprivileged children during the 2010 World Cup. I pinched myself, but I was still hundreds of feet in the air, on my own, to take on whatever the motherland had to offer.

It was May 15, 2010 when I found myself walking down the arrival hall in the Cape Town International Airport in hopes of meeting someone from the volunteer program to pick me up and take me to my new home for the next few months. It was not even 7 in the morning and the sun beaming through the airport windows was warm against my skin. Distracted by the view outside, I nearly missed the petite woman calling my name over and over. “Jenna? Jenna?” I walked up, and said, “ I’m Jenna, and I have made it.”

It didn’t take long for me to settle in, meet the other volunteers, and make myself at home in a small town outside of Cape Town, known as surfer’s corner, or the ‘Berg, or Muizenberg. The ‘Berg was a small paradise. I lived within walking distance to the beach that was surrounded by breathtaking views of mountains that seemed to go on forever. It also didn’t take long for the 25 volunteers, to become like a family. We might have all been in different volunteer programs, some teaching, some surfing, and some coaching, but we all came to the ‘Berg for one reason…the kids.

The first time I made the 45-minute walk into Capricorn town-ship to the school where I’d meet the boys I’d be coaching for the next four months, I went into shock. I had imagined what town-ships looked like, but when I was standing in the streets right in the middle of one, I couldn’t help my emotions. Garbage was piled high with kids climbing to the top, the water where a few were swimming looked more like a swamp, and the amount of stray dogs roaming around, sent chills up my spine. Then out of nowhere, a young boy came up to me and grabbed my hand. I snapped out of my daze, and looked down at the boy. Although, he was missing his front teeth, he had the biggest smile I had ever seen. He looked up and said, “Teacha, are you the next football coach?” I said yes, and before I knew it he was yelling, “the coaches are here, the coaches are here.”

At 2 pm each afternoon the four coaches would make the long walk to the school where we would grab the limited amount of equipment, and the boys to walk them to the field where we practiced each day. The field looked more like a beach, covered in sand with two wooden nets barely standing together at each end. However, this field was where these 11-year-old boys could forget about running home before dark because it was too dangerous to be alone after 5 pm, or where they wouldn’t have to worry about being bullied or pressured into drugs, this field is where these boys were allowed to play soccer, and just have fun. For a lot of these boys, this sandy field was where they dreamt of one day playing for Bafana, Bafana.

Some may believe freedom comes when you are alone on a beach with nothing, but the sound of waves in the background. Or maybe you’re at peace in the comfort of your own home. But if someone told me I would feel the most free in the middle of one of the most dangerous townships in Cape Town, South Africa, on a sandy field coaching boy’s soccer, I would never have believed them. 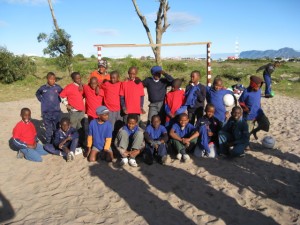 Two years later, I still hold the ‘Berg close to my heart. The boys I coached became like family. Most of them struggling to stay away from the pressures of joining the gangs within the township, or some having to take care of their younger siblings because that’s all they had. With struggle comes true strength, and the amount of strength and fight these boys had became an inspiration for me. I wasn’t just coaching a soccer team; I was apart of something bigger that summer. As the World Cup took over South Africa, there was complete joy on every little boy’s face as they put on their cleats, to play the nation’s national sport. When we took the field to scrimmage with the kids, I have never felt more alive. These kids who have seen family members be shot, or go days without eating, or have next to nothing had taught me what true happiness is…and that’s to enjoy and take advantage of what you do have. And that’s freedom. And I just so happened to find my freedom a thousand miles from home in a middle of a dangerous township in a small town known as. ‘the ‘Berg,’

About the Author:  My name is Jenna Gonneau. I am prone to wander ever since booking my first solo trip to South Africa in 2010. Since then I have been back to Africa, camping through seven different countries, then backpacked through SE Asia for half a year. I am a writer who is currently planning my next adventure…