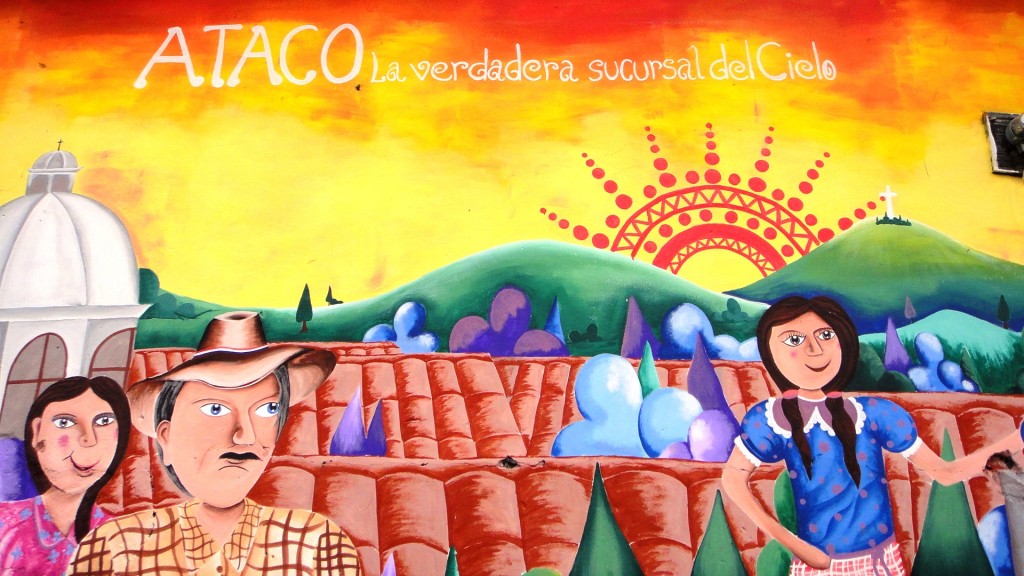 Salvadorans love their country and all the tiny region has to offer. From beaches to waterfalls and archaeological sites to charming villages, the locals in El Salvador enjoy frequent outings to discover and re-visit nearby destinations.

If traveling is about doing what the locals do, then Ataco is one of the best places to visit in El Salvador! We spent three weeks in the country in December 2011 with the majority of the time spent in this sleepy village.

The quiet town of Concepcion de Ataco is located on the Ruta de Las Flores, one of the few traveler and tourist attractions in El Salvador. A local favorite for San Salvadorans on weekend holidays, Ataco is slowly receiving attention from international travelers too.

This colorful pueblo holds its own as a small but prominent stop on the 36 kilometer route that begins just 20 minutes south from the Guatemalan border. Ataco along with Juayua and Apaneca are the three stars on the short and pleasant journey through coffee plantations on the hilly “flower route”. Ruta de las Flores is a worthy detour if not a destination in itself when traveling through Central America especially if you like a good cup of coffee!

Famous for its colorful murals, hospitable residents, and fresh grown coffee, Ataco charms both local and international visitors with its vibrant ambiance. El Salvador as a whole, in fact, we found to be incredibly friendly! It seemed as if people were genuine and honest and always willing to lend a helping hand.

I first visited Ataco in 2008 and already so much has changed – in a good way. Ataco has quickly adapted to its surge of new visitors both local and foreign. Just within the past 5 years I’ve seen how the town has evolved and new businesses have sprouted everywhere. It’s as if every household has some type of store front and signage now.

A lady that previously sold tamales and pupusas to her neighbors on weekends has now added a restaurant to her property. A video store near the park now also sells handicrafts. A small group of Indigenous woman from nearby Guatemala have now set up camp in the park, selling bags and scarves to tourists. The streets leading to the church and the park have established themselves with new restaurants, artisan shops, and coffee houses. There’s a nightly market when it’s busy and a small food festival every weekend in the park.

Visiting the town during the El Salvador holidays including Christmas and New Year’s we witnessed Ataco in full effect! It drew so many locals from the capital that there was one Saturday evening were all the hotels and hostales were fully booked! People had to stay in nearby Juayua.

We asked the local visitors what the big draw was for them to leave the city every weekend. Only about an hour’s drive, they explained that in Ataco they could relax, take a break from the heat, enjoy good food and drink, and participate in the traditional aspects of the culture that still remain intact. It seems there’s always some type of celebration or festival taking place especially during religious days such as Holy Week. They also noted that safety was a big motivator.

While local tourism draws big dollars during Christmas, Semana Santa (Holy Week), and random weekends, the rest of the time you could be the only traveler visiting this town.

If the town is becoming so tourist driven then why do I consider it a great destination for those seeking to get “off the beaten path” in Central America?

Because the tourists the community currently caters to isn’t Western– they’re all locals. It’s nice to mingle with Salvadoran tourists who enjoy their own country as much as you will when you visit 🙂

Some of my personal favorite Ataco highlights are the cheap and delicious pupusa stalls at the fruit and vegetable market, the chocolate covered fruit skewers at the Chocobana Mania shop near the park, and the beautiful handi-craft stores. I don’t drink coffee but Harry said that Ataco had the best coffee in all of Central America!

Ataco and Ruta de Las Flores is an easy stop for those traveling in between Guatemala and Nicaragua or Honduras and one of the best places to visit in El Salvador!

For more about El Salvador, check out my travel blog Wanderlust and the Girl and for the ultimate packing lists for travel, check out my website Travel Fashion Girl.

Originally from Los Angeles, Alex has been traveling around the world since 2008. 36 countries and 6 continents later, she’s travelled as a tourist, a backpacker, and a vagabond. Learn how to travel stylishly and practically on her website Travel Fashion Girl and find out more about her travels on Wanderlust and the Girl. Twitter: @TravlFashnGirl