The Wagah Border Ceremony between India and Pakistan 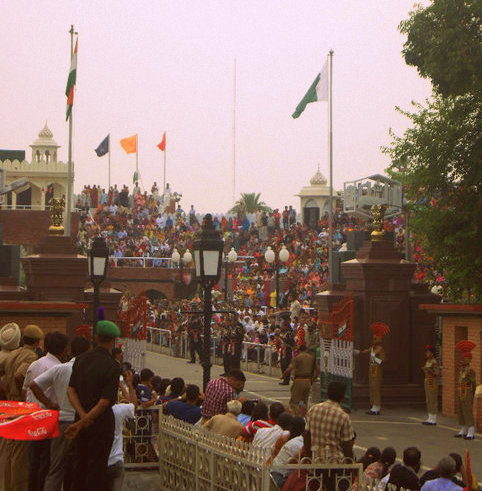 The Wagah Border Ceremony between India and Pakistan

To say that the border closing ceremony at the Wagah border between India and Pakistan was the most bizarre day of my life is an understatement. Witnessing this daily tradition between the two countries to me felt like an anthropological experiment, like I had just walked into an episode of Human Planet. Having said that, for that reason it stands out as one of my most treasured travel memories, one of those days that will stick in my mind for a very long time.

The border closing ceremony between India and Pakistan is a daily ritual that happens at the Wagah section of the border, which is accessible from the nearby city of Amritsar. Me and my travel companions took a taxi to the border, with no idea what to expect other than what one paragraph in a Lonely Planet guidebook had told us of the event – which was very little in terms of what actually went on. Along with hundreds and hundreds of locals, we walked from where the taxi dropped us off, into the main area, which can only really be described as an oval-shaped area, with huge concrete steps that spread up around it for seating, and a giant gate cutting right through the middle. That gate was the border between India and Pakistan.

As foreigners, you’re given your own seating area near the front, and piling in with a crowd of other tourists we sat and waiting for the ceremony to begin. It was hot that day, I mean really hot, and due to all the crowds, you have to get to the arena early so that everyone can get to their seats. We sat on those concrete steps for what felt like hours before anything happens, then, all of a sudden, that action began. 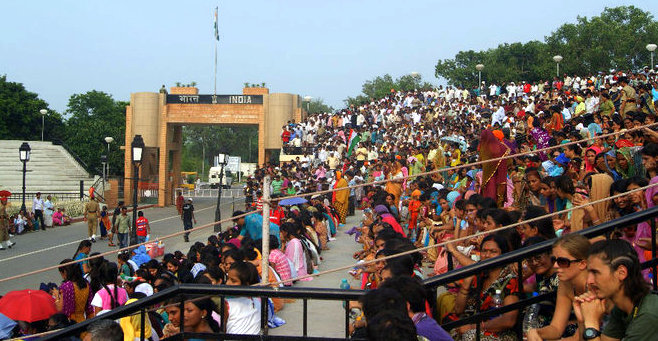 To get the crowd warmed up, the officials start to pump bhangra music out, and the reaction from the locals is nothing but electric. All the women in the crowds come down and gather in the centre of the arena, dancing, hollering, and radiating pride for their country. They give the women giant India flags, and they hold races from the centre of the arena, to the border gates, and back again. These races had no age limit; they started with young girls whizzing back and forth, and slowly the age on the competitors increased. At the end, two women who must have been in their 80s glided through the crowds with the flags, showing no signs of old age whatsoever. I compared this to what I would imagine my two grandmothers would look like racing, and felt it would be more hobbling and complaining of joint pain than elegance that these Indian women had. 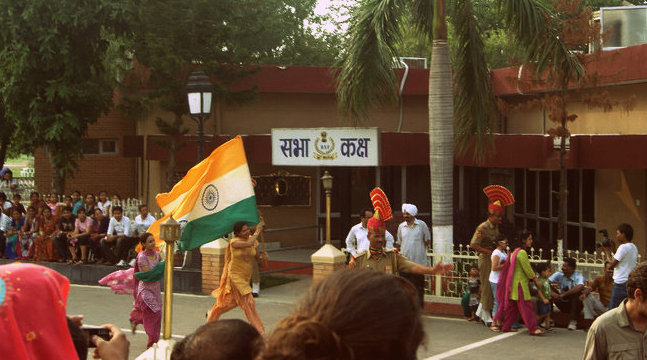 Next, the army officials come out on both sides of the border, and what I can only describe as a shouting match ensued. To put it in its very basic terms, and I’m presuming it was much more significant than this, but it just seemed the people with the microphones simply shouted the names of their own countries or regions, seeing who could hold it for the longest and loudest. Their attempts were met by their respective crowds with deafened roars of repetition as they tried to outshout the other country.

The army officers then proceeded to march and gallivant across the middle of the arena, dressed in incredibly extravagant uniforms, complete with red turbans adorned giant fans – by far the best and most creative army uniform I’ve seen to date. There seemed to be one ranking officer in the group of around 6 in total, who continued to shout at his men, and high kick his way around the space. I have never seen a man be able to kick one foot up quite as high as this man, and I feel pretty confident that I never will see anyone who can beat him. 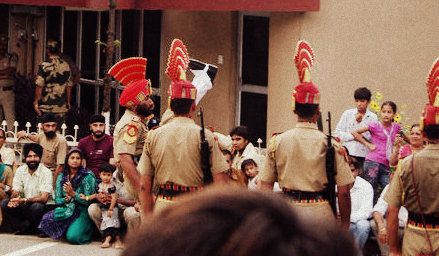 During this time, the gates between the two countries are opened, and both armies continues their marching towards each other and their rituals become something comparable to a Haka as the two groups direct their firey patriotism at each other.

After all that build up, the second where the two head honcho officers from each country shake hands could easily be missed in the blink of an eye, and the gates are closed, flags lowered, and the ceremonies are over. It seems that the build-up to that moment is actually worth witnessing far more than the actual moment itself, but the entire ceremony as a whole was nothing but a whirlwind of pomp and circumstance that captivated me for hours on end. Extremely weird, and without a doubt wonderful, there is no chance that you won’t enjoy the Wagah border ceremony; it’s an incredible piece of cultural curiosity that should not be missed. One thing’s for certain, you’ll leave asking yourself this question – ‘Did all of that actually just happen?!’ 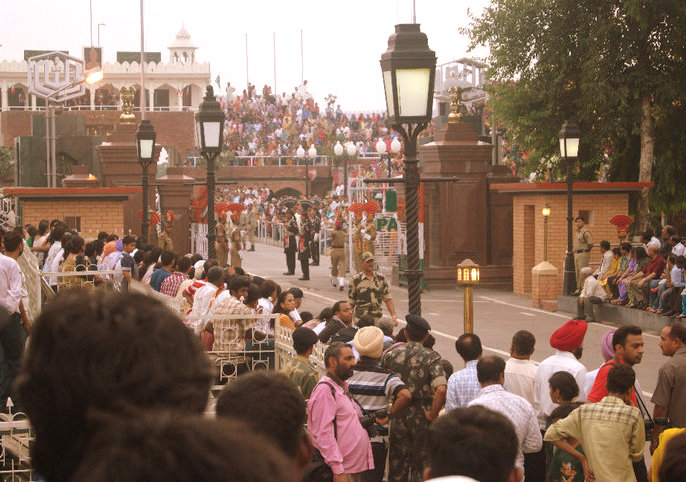 About the author: Emma Higgins has been writing/traveling on and off since 2009. Her blog, Gotta Keep Movin’, is full of stories and advice from her trips, which include Europe, India, Morocco, South America, USA and Canada.

Athens, Greece: A Walk in Anafiotika
Phuket: Thailand's Island Utopia
5 Reasons Why You Should Make Crete Your Next Holiday Stop
Top Three Reasons to Visit Copenhagen

Emma Higgins has been writing/travelling on and off since 2009. Her blog, Gotta Keep Movin’, is full of stories and advice from her trips, which include Europe, India, Morocco, South America, USA and Canada. Her focuses are budget travel and volunteering, and she’s been involved in sustainable farming in Argentina, animal shelters in Peru, and making goat cheese in British Columbia. Follow her on Facebook, Twitter & Instagram.

4 responses to “The Wagah Border Ceremony between India and Pakistan”