How Tilos; a Tiny Greek Island Stole My Heart 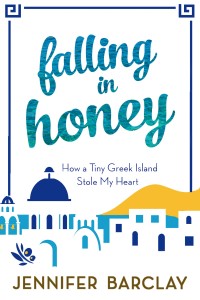 I enjoyed the book, “Falling in Honey; How a Tiny Greek Island Stole My Heart” by Jennifer Barclay and wrote about it for the Huffington Post. I asked if we could share an excerpt and she said YES!

From the book, “Falling in Honey; How a Tiny Greek Island Stole My Heart:”

Tilos is a tiny eight miles long and a few miles wide. The population is somewhere around five hundred depending on the season, the people far outnumbered by thousands of goats roaming wild. The whole island is a conservation area for wildlife: often the only sounds are crickets, bees, crows, and donkeys. There are little chapels built into otherwise empty hillsides, and walks to Eristos beach go through a lush valley of olive and fig trees.

One morning, alone, I follow a dirt track leading away from Megalo Horio and end up wandering through a deserted valley pungent with thyme, marjoram, and sage, until gradually blue sea appears in the distance. I keep going and find a secluded cove of red sand and clear water: Skafi beach.

The villa is on the edge of Megalo Horio, which means “Big Village”; although it is the administrative capital of the island, these days the name seems amusingly ironic,
like calling a basketball player “Shorty.” I read in the guidebook that Megalo Horio had a “one-way system” and “supermarket”; I’d imagined lots of traffic and a hypermarket on the outskirts of town. The reality is so very different. For “one-way system,” read: there is one road through the village, and it’s too narrow for more than one car at a time, and even that car has to stop sometimes to let cats and chickens pass; as it goes through the village there’s shade created by a huge arch of bougainvillea. As for the supermarket, it’s a family-run shop with two rooms. The village is home to about one hundred people, two tavernas, and one café-bar serving drinks and frequented mostly by locals. Slumbering on a hillside topped by a ruined castle, Megalo Horio isn’t exactly a hive of activity.

The island also has a “Small Village,” or Mikro Horio, but that was abandoned half a century ago and is now uninhabited. And there’s a very small settlement with just a couple of tavernas by the sea at a place a mile north of here called Ayios Andonis. But the main village is the port, Livadia, where we arrived, four miles to the south of Megalo Horio. We visit again on the island bus and find it has about a dozen tavernas, a handful of family-owned mini markets, a butcher’s and a bakery, and a few gift shops and low-key bars. We sit on the rooftop terrace of one of the seafront bars and meet a friendly local man who tells us about the sheep and goats he raises when he’s not helping his son serve drinks.

Tilos hasn’t succumbed to mass tourism or become the kind of place that sees visitors only as a source of money, but, thankfully for us, it hasn’t developed itself into a “holistic spa yoga retreat” either; it is pure, unreconstructed Greece at its best. The island is also a walkers’ paradise. Many of its beaches are reached only by restored mule paths or goat tracks through countryside. The islanders, though they might not walk much themselves, encourage visitors from all over Europe who enjoy walking and nature—with the protection of wildlife, rare bird species found here include Eleonora’s Falcons and Bonelli’s Eagles and Long-Legged Buzzards. 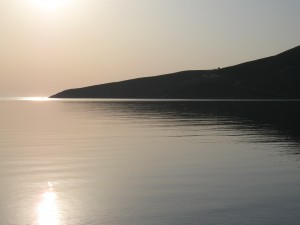 The four of us have big lunches at a taverna by the sea at Ayios Andonis where they bake their own bread and catch their own fish and add pickled local capers to the salad, and another place where they grow their own vegetables and have friendly cats. At Kastro restaurant in Megalo Horio, where I endear myself to the owner by speaking a few half-remembered words of Greek, they serve dishes of their home-reared goat and pork baked with tomatoes, and mash up their own potatoes and herbs into irresistibly melt-in-the-mouth keftedes. One evening, walking back from the restaurant toward the villa, we hear live music coming from behind trees at the end of a long garden. “D’you think that’s a bar?” asks Chris, walking toward it.

He keeps going, and we follow a few steps behind. Sure enough, we’ve walked onto someone’s terrace, where a man and a boy are playing traditional dance on a Greek lute and a lyra, the three-stringed fiddle. They invite us in to sit down and listen, and the man’s wife brings us a plate of melon and apple. I am delighted to have found this island.

A year later, I’m heading back to Tilos alone…

From the ferry, I see the huge semicircular blue bay, and the view I photographed last year when I was leaving, which a few months ago I put on my computer as a desktop photo to remind myself every day I’d be back: the rugged brown hillsides, the immaculate, brilliantly whitewashed houses, lush green trees and pink flowers. As we close in on the quayside, I spy a terrace with a vine beyond the Mini Market and wonder if it will be mine. There’s the deep clanking as the anchor’s chain unravels and the anchor goes down, and adults tell children to wait (Pereemeneh!) as we all cram forward to exit.

And here I am, walking up the jetty, breathing in the clear, gentle air of Tilos. It is just as I remembered it: through the square and past the bakery and five minutes after I’ve disembarked, my landlords are ready to show me around my new home. The terrace is enormous, with a vine hanging from a trellis.

By lunchtime I am lying on an empty stretch of white pebble beach, looking out at the expanse of blue bay, listening to the waves calmly stroking the shore. The water is cold, but I plunge in for a quick swim and it feels amazing. I can’t take my eyes off the view for long; life does not get much better than this. Eventually, I get up and walk.

The main road has been diverted to the back of the village and a simple pedestrian walkway follows the curve of the bay, passing the church, restaurants, rooms for rent—and I love that there are still a few fields that come right down to the waterfront too. And at any point you can step off the path onto the beach and sit in the shade of a tamarisk tree. I follow it all the way around the bay, passing the last straggle of houses at the end of the village, and follow the road up the hill. It keeps winding up, amid the sound of goats and bees, toward a little chapel that looks out over empty mountains and deep blue sea.

The white pebbles give the sea a pale topaz color, becoming darker as it gets deeper. I could happily look at this bay for the rest of my life, this perfect semicircle of deep blue, with rugged hills curved all around.

Manolis sees me at the beach at lunchtime and comes over to join me. I was rather hoping to have some time to myself. Yawning, I tell him I stayed up too late.“I am like grandmother,” he says. “Except one night a year stay up late for paniyiri at Easter Saturday, I always have enough food and sleep. For this I will live to one hundred years.”I decide not to pursue the topic but to go for a long swim. After days of snorkeling it feels good to stretch out with long strokes across this big, open bay.

“You are swimming like a dolphin,” says Manolis. “And I swim like a duck.” I giggle. He tends to do a kind of doggy paddle in the water until he finds something of interest on the sea bed, and then dives down—a bit like a duck, it’s true. Because the bay here is mostly sandy, there’s not so much to see, only tiny fish. He has to go to other places of course to catch big fish.

“So where do you find octopus?” I ask.

He pauses, thinks about how to explain. “You look for some little white rocks, is the nest, octopus hide inside.” 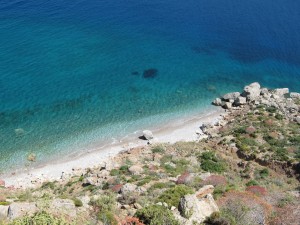 Swimming back, he dives down and finds a big, beautiful shell half buried in the sand, which he puts in the net bag he wears around his waist while swimming. I swim on ahead again for the exercise, letting my eyes wander over all the details in the mountains around. By the time I get back to my towel, I’ve been in the water for forty minutes and am ready to rest.

Just as I’ve taken off my aqua shoes, he beckons me to come back into the water, pointing down to the sea bed. He must have found something interesting. I dash back in, putting on the snorkel and mask again, and try to see what he’s pointing at—a rock with a little cave underneath, and something orangey-brown inside. Then suddenly he plunges down, kicking with his flippers, pulls up the rock and in a flash he is back up with a small brown octopus in his hand, which he hands over to me.I’m holding an octopus.

“Is not dangerous,” he says.

It’s small, and delicate, and the little suckers on its tentacles tickle my fingers as it writhes around gracefully. Manolis shows me how to stroke the octopus’s head, which feels incredibly soft and smooth. It crawls around my hand, ever so lightly sticking to me, and seems to be trying to decide if my hands are a comfortable new home or not. I am so excited that as I try to keep my head underwater and hold onto the octopus without hurting it, I keep swallowing water through the snorkel and half choking. Manolis takes it back and the octopus decides it’s had enough of this game, shoots purplish-black ink at us, and makes its escape down to the deep.When I come up for air and can breathe normally again, I am still giggling and have a big grin on my face.

“Is only small one, half-kilo. It is illegal to take this out. But I want to show you. You look like a little child when you take the octopus.”

About the Author: Jennifer Barclay is the author of  Falling in Honey (published by Sourcebooks in the US and Canada, and Summersdale in the UK)

A Taste of Immortality- Part 2
Australian Animals
Help Wanted: Una Compagna di Giochi (Playmate)
Crazy about cooking - a chef's guide to working on a luxury yacht in the Galapagos Islands