A holiday to Disneyland was every kid’s dream when I was growing up and it finally became a reality last year, albeit as an adult. But better late than never! The theme parks are not just for kids any more and in fact parents probably look forward to it just as much as their kids thanks to the enormous variety of entertainment on offer. From golf courses, rides that would terrify the biggest kids and evening entertainment – it really would be impossible not to have a good time! We certainly had a blast!

Of course everyone knows about Walt Disney World and it is usually the first on everyone’s list to visit and if you are looking for cheap Disney tickets for Orlando then it pays to shop around. There are so many combinations possible with all the different parks within Disney World itself that it’s easy to get confused. One-Day, Multi-Day, Multi-Park – it goes on!

Most people who visit Florida will concentrate on Disney but when we went, we also took advantage of a great tip that we stumbled across online – the Orlando Flexticket. It’s mostly self explanatory! For example, it allows you the option to choose from five or six fantastic theme parks. You can choose from amazing Aquatica, brilliant Busch Gardens, unbelievable Universal’s Islands of Adventure, superb Seaworld, wonderful Wet ‘n Wild, or erm, ‘uncredible’ Universal Studios. You even get to visit the Universal City Walk – a fantastic entertainment complex of shops, restaurants, clubs, theatres and a 20 screen Cineplex. Phew!

Here’s a run-down of what’s on offer at the six theme parks: 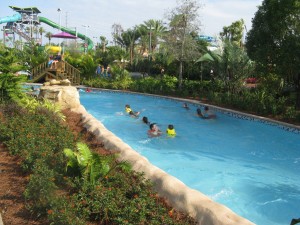 Aquatica is Orlando’s latest addition. This great water park has two rivers for you to choose from. If it’s colourful fish you are after, then let one river float you through an undersea world. For the thrill seekers, choose the second river for churning breakers and rapids. Or take a ride on Dolphin Plunge. There are water pools for you to swim in, pools with double waves for you to splash and laugh in or you can choose to soak up the sun on one of several white sandy beaches. If it is tubing and half piping you want then take a ride on the awesome Omaka Rocka. Or Whanau Way – a five storey slide with stomach churning drops, surprising curves and fabulous water curtains. There are also plenty of safe rides and water pools for the little ones but we obviously avoided those in favour of the more insane slides! 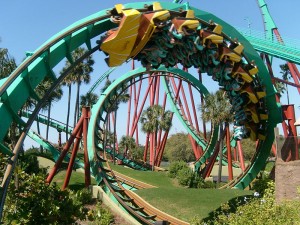 Busch Gardens is 335 acres of adventure, a combination of thrilling rides and stunning creatures. Get close to Cheetahs on the Cheetah Run, or match the speed of a cheetah yourself by riding on Cheetah Hunt – one of several roller coasters in the Busch. In fact, there are more rollercoasters here than any other park in Florida. The sensational Sheikra, for example, takes you 200 feet up and then throws you 90 degrees down at 70 miles an hour! There are also several animal habitats in Busch Gardens, such as Jungala which allows you to interact with some of the world’s most endangered animals. 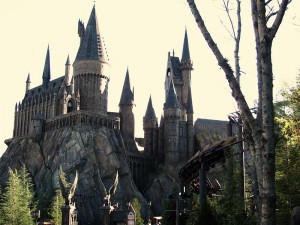 Universal’s Islands of Adventure consists of uniquely themed islands full of rides and other attractions. Children’s comic and story book heroes come to life here – such as The Amazing Adventures of Spiderman – a ride where you do battle in 3D with some of Spiderman’s worst enemies… dare you?

Come face to face with a REAL LIFE (alright, not real but as good as) T-Rex on the Jurassic Park River Adventure or defy gravity on The Incredible Hulk Coaster. Enter the magical world of Seuss’ Cat in the Hat or explore the mysteries of Hogwarts Castle in The Wizarding World of Harry Potter. I have to admit, I was really looking forward to the new Hogwart’s area the most as I’m a huge fan of the books and movies. It didn’t disappoint! 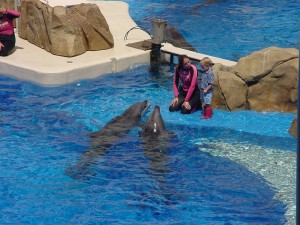 Sharks, polar bears, whales….all waiting for you to meet them at Seaworld. Or take a Journey To Atlantis – a coaster with two of the steepest, fastest and of course wettest drops in the world! Absolutely terrifying, I’m not sure if I could do it again. With lots more water based fun at Wet n Wild plus the working motion picture studio and other film themed attractions at Universal Studios, you can be sure that, you’ll be absolutely worn out after a few days!

One response to “Theme Park Fun in Orlando”