India: There’s Something About Lord Buddha That …

Touristy holy places demand a certain reverence even from atheists and visitors of different religions. But what happens when flippant tourists fail to differentiate a museum from a mausoleum? In most cases, guardians of the sanctum will take the culprits to task, or devotees themselves will play moral policemen. Even if a scuffle does not break out, it just leaves a very nasty aftertaste.

I’ve seen this play out at Montmartre’s Sacré Cœur, as well in the Tomb of King David in Jerusalem. Mobs of tourists jostling each other, babies screaming, mothers punching their pink mouths in retaliation, and then the guards and the faithful swearing down heavily. It is impossible to make a moral judgement on either party, and it feels like the pious are being tested in fire to see if they can live up to the tenets of their respective faiths.
Some years back, I was headed to the Mahabodhi Complex in Bihar, one of the holiest sites for Buddhists as this is where Lord Buddha attained Enlightenment under the Bodhi Tree. As the car swallowed the miles on a shiny highway into the Indian state of Bihar, we reached Bodhgaya and stepped into the UNESCO Temple complex. Like I expected, it was devoid of superciliousness on the part of its devotees. Donation boxes were few and far between, and not a single monk was to be found begging for alms.

A local Bihari tourist guide took us around the sprawling complex and explained the history behind each structure, garden and pond. His constant and only refrain was, ‘Emperor Ashoka built. Muslim destroyed.’
This is why they say that a half-truth is more dangerous than a whole lie.
We finally reached the sacred Bodhi Tree. You might not believe this but the temperature actually dropped several degrees under this particular tree (and no other). I might add that the daytime temperatures were a blazing 38-40 degrees. All was quiet and restful until a family with several children came along, the adults hysterical with delight on seeing the Bodhi Tree from long-forgotten text books, come to life right before their eyes. A passing monk merely stopped with a twinkle in his eye and raised a finger to his lips. The troupe immediately quietened down, chastised by this humble, friendly gesture. 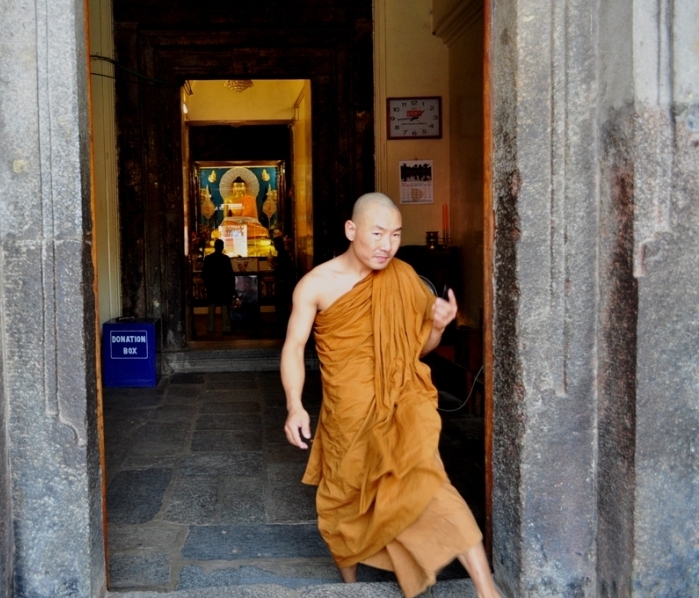 Then came along Thai tourists who also wanted to have themselves photographed against the tree. I watched a Westerner scowl at them in disgust as if their touristy behavior degraded the sanctity of the holy tree.

And then came surprise number 2: another passing monk who signaled to them that he would take their pic so that they could all be in it together. He later even posed with them.

Next in line to commit a faux pas was yours truly, when my mobile phone started to ring loudly inside a holy shrine where monks and lay persons were in deep meditation. A cacophonous sound that reverberated mercilessly while I groped through my sack for my phone, and it evaded me (this is what they call Murphy’s Law). While fumbling in embarrassment and disappointment at my own negligence, I caught sight of a few monks still with their eyes closed, with an amused, knowing smile on their lips. What, what! Shouldn’t I have been sshhhed at, rebuked and signaled out with damning eyes by then? I think I would have certainly done that!

This was one of those ‘Moment of Truth’ times where I finally came to realize how the ideologies of religions can shape the behaviors of their faithful. As I managed to locate the phone and silence it, a few monks even broke into a smile (eyes still shut), palpably sensing my relief. Memories of the previous day at Varanasi’s Kashi Vishwanath Temple came flooding back as I remembered the astute priests and touts profiling the crowds better than the Interpol, Mossad and FBI put together, all in the hope of making a quick buck, by proposing to palm read, get you the best ‘pooja’, or simply take you ahead of the serpentine queue. The organized chaos was regularly intercepted by distraught women devotees who were felt up by anonymous grubby paws, taking full advantage of the crowds. Photography was out of the question as all visitors were made to deposit their shoes, bags, mobile phones and cameras at shops several meters outside the entrance. Even wallets and passports were checked!

And then… I snapped back to the present, to this Über cool shrine whose believers would make Gautama Buddha very, very proud!

Like a monk in Burma told me, ‘It is not without reason that Buddhism was born in India and died here too’.

Luxury Spiritual Quest to Bali, Special Savings!
Inspiration for the 2020 Graduates: Life is What We Make It
Discovering Redondo Beach
When time stands still in India

3 responses to “India: There’s Something About Lord Buddha That …”