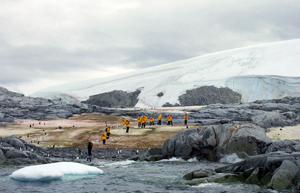 My first trip to Antarctica was aboard M/V Akademik Shokalskiy, the same Shokalskiy that was beset in ice for a month in December 2013. My voyage occurred a few years earlier. Twenty-eight passengers sailed from Ushuaia, Argentina to the Antarctic Peninsula. That venerable vessel weathered a Force 9 gale through the Drake Passage. I did not fare as well.

Business had taken me to the southernmost continent. Unlike most of my travelling companions, I had not spent years dreaming of vast expanses of pristine snow and photo opportunities in penguin colonies. Fortune had favoured me. I was offered the travel adventure of a lifetime and I took it.

The “oh wow” moments accumulated as the voyage progressed. I discovered silence is palpable while floating in a bay surrounded by cliffs of ice. I understood the meaning of fickle when a humpback whale breached in the distance. We ignored it because there was a right whale playing alongside the Zodiac. The day prior, we had spent 45 minutes hanging over the deck railing as a pod of humpbacks fed off the starboard side. We collectively swore, we had never seen anything so exciting…until the next extraordinary moment came along. Inspiration, however, hung back, loitering around the edges, just out of reach.

We anchored off Petermann Island, covered in a dome of ice and snow that had receded to expose ancient rocks along the shore line. We were traveling late in the season, most of the penguin colonies were empty. On Peterman, the Adelies were huddled together. Their natty tuxedos bedraggled with molting feathers. An assortment of seals lazed on the shoreline. The sky was overcast with glowering clouds that drained the sparkle from the snow. In that humble environment, inspiration struck.

I had turned my back on the island and looked across the strait to the mountain range that defined the spine of the peninsula. The ship was at anchor in the bay below. There was a seal in the foreground. Silence wrapped me in its arms. In that moment I let go of the tension that accompanies me more reliably than my baggage. Immediately the sun burst through the cloud cover in great streaks that illuminated the mountains, backlighting them as if Rembrandt had painted their portrait.

I was Eve in Eden.

Petermann Island haunted me. On my return, if I were allowed to relate only one Antarctic story that was the story I told. I showed the photograph I took. [It illustrates this article.] The photo failed to capture the primordial. It was merely an aide memoire.
A few years later, I attended a workshop for aspiring watercolour painters. The letter sent prior to the class instructed students to bring a photo, something to act as reference. I brought my photograph of Petermann Island, so I could immerse myself in the memory. The experience transferred to the paper fluidly, a skill of which I had never before been capable. I had been inspired. I continue to be.

About the author: Prisca Campbell is a polar travel who has sailed to the North Pole and Antarctica. Follow her @polarprisca or join the LinkedIn group she manages Polar Professionals.

Florida: Kava Culture
Costa Rica: My Inspiration and My Nature
When Time Stood Still in Argentina
The Resiliency of Sarajevo: Forgiveness in the Balkans

One response to “Petermann Island, Antarctica: Eden on Earth”