Puerto Rico: The Transitions of Maricao

This is an entry in the We Said Go Travel Writing Contest written by Diego G. Aviles Acostas from Puerto Rico. Thanks for your entry Diego!

I open my eyes and still see the blackened sky, with dozens of scattered stars looking down on me. The trees move violently with the wind uttering sounds that resemblewaves wrestling the rocks on a stony shore, with eyes closed it was almost like you were there. On and off all night, I couldn’t quite grab a stable sleep that lastedmore than two hours, the stone floor was merciless on my back and the only shield, a sleeping bag, didn’t offer much protection. I looked to my right and my companion seemed to be fast asleep, I searched in the darkness for my phone, anxious to see the sun on the horizon, but discovered that it would probably be a few more hours till I have that pleasure.  It’s crazy that we were sleeping here in the first place. 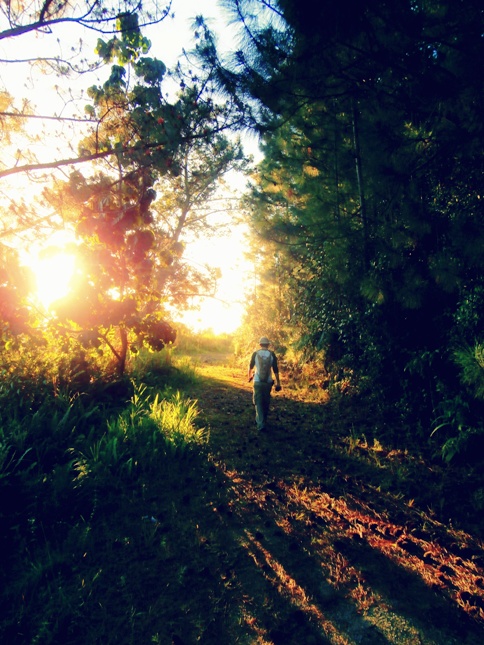 Two days before the fantastic idea sprung out of my mind, “Let’s camp out!” Originally we had about 5 volunteers, but by the time the moment of truth was upon us, only my good friend, Gabriel, or as everyone calls him “Dude”, pulled through. Gabriel and I readied our belongings for the endeavor,to a stone house up in the mountains of Maricao. Allegedly, according to my aunt, the house was owned by Luis Muñoz Marin, first elected Governor of Puerto Rico, back in the year 1949.

Puerto Rico is a densely populated island, so it’s rare to find yourself driving among lush vegetation, but up in the mountains it was generally the case, it’s a great change of picture from the urban streets down below closer to the coast. Leaving the car out in the open road would had stirred worry in my thoughts, so I hid it behind the cover of some bushes, next to what appeared to be an abandon nursery or orphanage.

Before we headed out, we climbed to the roof of the building to get a look at the staggering view to inland Puerto Rico, which was mostly mountainous and dense jungle, and of the west coast. I could see my home town of San German off in the distance and even the ocean, the sunlight reflecting off it, resembling an ocean of light, rather than water.

After a walk, that was longer than anticipated, we reached the house.It had a medieval feeling to it with a big fireplace in the middle, but no roof. The green moss was slowly overpowering the stone. Plants finding refuge on its cracks and crevices, nature reclaiming what is rightfully hers. Two pillars used to stand inside, but only one remained, holding up the little foundation that remained of the roof. With a wasp hive on one of the windows, we hoped to coexist with them on this one night that we planned to sleep here. 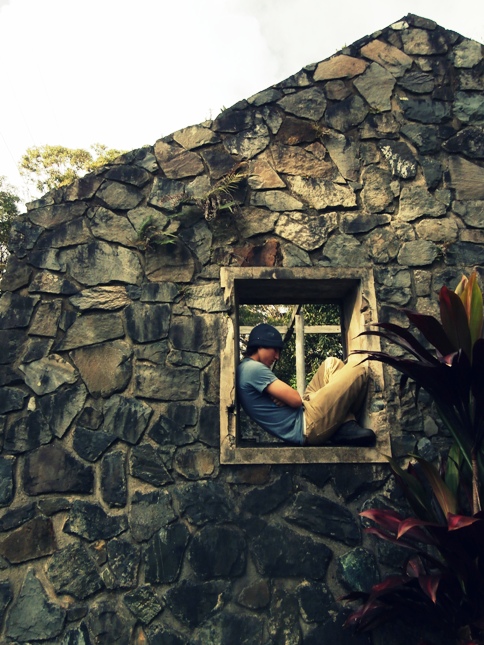 We walked around the surrounding area for a couple of hours, and we stumbled into a ravine full of pines and acorns scattered all over the place. The sunlight peered through their branches like daggers, the fresh pine smell, elevated out of the ground and into our lungs. It almost felt like we weren’t in Puerto Rico anymore, the vegetation felt so different from what you see below; it felt northern, and the chilly temperature further complemented the feeling.

The sun was setting and we took full advantage of our location. We sat and watched, on a cliff overlooking the western coast, including my hometown. The crimson sky on the horizon got slowly eaten up by the creeping tendrils of the night sky.The creeping blackness soon had bright eyes that peered below, first a dozen of them, then hundreds, enveloping the sky. A blanket of darkness fell over my hometown, but right before it became consumed, an orchestra of light came to life, lifting the veil and creating a stalemate between two armies.The lights of the city and the starts of the sky would stare unto each other, until the rising sun overpowered them both.

We got back to the cottage and tried to start a fire with one miserable lighter I brought, but to no avail, we eventually gave up. We sat on the little cushion our sleepy bags provided, ate the provisions we brought, and talked of our failed fireplace and the uplifting feeling it would had brought us to sit there among its heat, observing it for the night. Much to my surprise, in the morning, I would discover that it was a fortunate thing we failed at lighting it up. The wasps weren’t our only housemates, with a young sun on the sky; a humming bird sprang out from below the chimney. It hovered over the mess we had made and I watched thankfully, that we failed.

About the Author: Diego G. Aviles Acostas: I was born in New York, but lived most of my life in San German. Being in one place for the entirety of my life, I’ve developed a hunger to see the world and other cultures that I hope to one day placate.   http://www.facebook.com/Die.Go189

How to Indulge in the Many Personalities of Puerto Rico
Iceland: Chasing the Northern Lights
Take Me Back to the Black Hills of Dakota
The Winners of the 2014 Inspiration Travel Writing Contest

4 responses to “Puerto Rico: The Transitions of Maricao”