I Crash a Horse Race in Mongolia

Our route now took us north, down out of the Khangai Mountains, where, for the last night of a two-week camping trip in the Mongolian countryside, we were going to pitch our tents at Ongii Nuur, a lake known for its birds. As we were driving along, I noticed a large ger encampment down and off to the left. I almost said something to to my Mongol driver/guide Khatnaa, but let it go. Then he had to slow down because a bunch of men and boys on horses were crossing the road. I told him about the gers. He made a right turn and followed the horsemen up the slope. And at the top found ourselves in the midst of over a hundred Mongols, many dressed to kill in fancy brocade del, sashes and boots.

Almost the only thing that I had hoped to encounter on the trip but had not was a local Naadam, a festival that always has a variety of traditional competitions and activities, including the Three Manly Sports of horse racing, wrestling and archery. Now it appeared that we had finally stumbled onto one on the last afternoon of the last day of the trip. 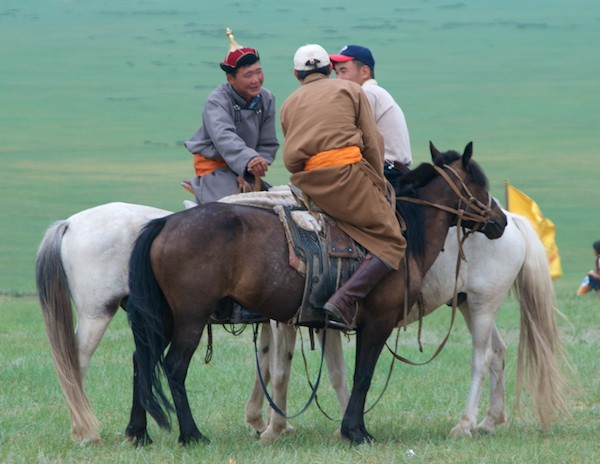 We pulled up in an area on the hill where a lot of cars and trucks were parked. There were horses all over the place. Khatnaa got out, spoke with someone and came back with the news that the event was a family reunion. Stay or go? We’d inadvertently crashed a private party. I told Khatnaa that it was up to him to do what he thought best. He thought for a moment while I held my breath and then pulled into the middle of a long line of cars, where we tried to be as inconspicuous as possible. Over the next two to three hours I sat in the big silver Land Cruiser and took around five hundred photos of whatever crossed my field of vision. Our arrival had coincided with run-up to the horse race and we had gotten there just in time to watch all the preparations for it.

It seemed like over half the men and boys were on horseback, warming up the racehorses, chatting and just riding around the area the same way the rest of us would walk. The trainers stood out with their fancy del, sashes, hats and boots, along with their sweat scrapers tucked in to the back of their sash. Older men sat on the ground exchanging snuff bottles in the traditional greeting. Kids were happily running and riding all over the place. Everyone was clearly having a great time, as was I watching it all.

Our “cover” was blown when a young couple on a motorbike drove up and offered us fresh, hot khuushuur (fried mutton turnovers). No way we were going to pass on those. I stayed in the car until the first horses were approaching the finish line and then got out and joined the happy crowd.

Afterwards, shortly before we left, I was photographing a lovely black race horse who was being scraped down, as the sweat from the winning horses is thought to be very lucky and auspicious. A woman came up to me, took my arm, led me over to the horse and made a gesture for me to lay my palm on the sweat, which suddenly turned me from spectator to participant. It was a very kind and thoughtful thing for her to do since I was very obviously not a member of this very big family. I was never so glad that I knew how to say “thank you” in Mongolian.

All day it had been cloudy and humid, with some squalls of rain. By the time we were back on the road to Ogii Nuur, it had gotten really windy. Khatnaa and Soyoloo, the cook, managed to wrap a tarp around a picnic structure to provide  shelter from the wind to cook our dinner. At dusk, it died down enough to set up camp on the lakeshore. All three of us were all pretty tired.

The weather was much better the next morning and we got in some good birdwatching before it was time to leave.  Soon we were on tarmac, leaving behind for this trip the earth roads I love.

By mid-afternoon we had arrived in Ulaanbaatar, pulling into the hotel parking lot.  My goal had been to just go out into the deep countryside without a set itinerary and let Mongolia come to me. And it did.