A Step Out of Time in New Orleans 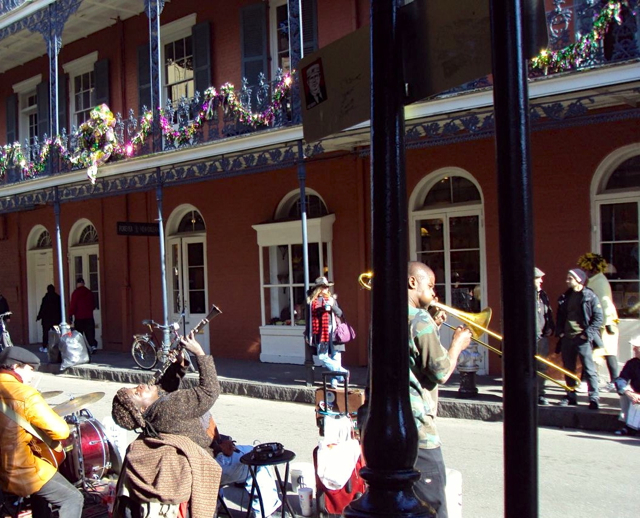 The further south one travels in the US, the less relevant and more fluid time becomes, as though the Mason-Dixon Line were some boundary not of cartography, but relativistic physics. Reasonable standards of time are casually tossed out the window like so much warmed sweet tea; phrases like “a little while” encompass not minutes, but hours.

There is no finer example than in New Orleans, where natives and travellers alike are swept up in its lazy flow like flotsam in the Mississippi. It’s a city of contradictions. Corruption and kindness operate on epic scales; proudly American, and yet feels as though it was swiped from France, or perhaps some island in the Caribbean. An old place, full of history at every turn, that pays time itself little heed.

I was raised on the east coast, where time is a commodity to be traded, invested in, even hoarded; if something can’t happen now, you’re not trying hard enough. It’s a way of living that can be exhausting, though many of those afflicted don’t realise the toll time has taken on them. Enter New Orleans. You want that now? Ah, just relax. Have a seat—want a beer? Now suddenly stretches on forever, becomes two days ago. Things happen in New Orleans when they’re meant to, never you mind. Time takes care of itself without any help from you, so why not sit back and enjoy life?

With time kindly removed from the equation, I’m free to enjoy life moment to moment. It can be something small, like the way a thread of Spanish moss plays in the breeze as it hangs from the venerable boughs of a live oak, the morning light dancing across the Mississippi’s rippling brown flow like a flotilla of golden coins, the rich, delicately chocolatey smoothness of a cup of cafe au lait. Or something big: the purple, green and golden pageantry of Rex Krewe as it drifts imperially down St. Charles, the wild cacophony of Jazz Fest echoing across the French Quarter, or the thrill of a spontaneous parade to celebrate a football team that finally caught its break. Whatever it is that catches the eye and imagination in this place, chances are it wasn’t what you’d intended. The fact that you’re in New Orleans, well, that makes it okay.

That’s not to say the Crescent City exists in a state of complete temporal anarchy. No, there are plenty of ways to tell time, arguably more apposite than the Gregorian calendar or solar day. Looking at it from the most basic perspective, time is divided in terms of safety: there is hurricane season, from late spring through early fall, and there is the rest of the year.

A year is planned out not through arbitrary months, but by festivals. Mardi Gras kicks off the year during several weeks in early spring, followed by French Quarter Fest and Jazz Fest. The Food and Wine Experience heralds the start of summer, while Voodoo Festival marks its end. Po’ Boy Festival in late November reminds you to pack on those extra pounds before the cold winds blow in from the north.

But perhaps the most pleasurable way to tick off the passage of time here is via the stomach. A chicory coffee and beignet start the day, whether enjoyed at a plastic table among the tourist crowds of Cafe du Monde or at a coffee stand in quiet, picturesque City Park. Read a book or take a walk until your stomach tells you it’s time for lunch, then indulge in a po’ boy, thick-piled reuben, watercress salad or slice of the best pizza outside New York. Whatever your choice, wash it down with a hometown Abita beer—you don’t have anywhere to be! Perhaps one beer leads to another, but you frankly haven’t noticed because you’ve been drawn into the most fascinating conversation with a convivial neighbor. Beers turn into aperitifs, an absinthe frappe or hurricane; your stomach is growling once more, and it’s on to dinner. And while time isn’t strict in New Orleans, dress codes most certainly are. If you’re in the mood to don tie and tails, you’ll be treated like Rex himself at Commander’s Palace, dining on foie gras and turtle soup. A more casual diner will still eat like a king, whether it be corn bread, greens and macaroni, oysters on the half shell, or a big old muffuletta. You’ll save room for bread pudding, of course, and finish off your meal with a Sazerac nightcap—a Toddy, if it’s winter.

New Orleans recognizes that life, not time, is precious, and that a moment savored is one to be cherished, and is impossible to waste.

About the Author: Emma Clark has been writing and traveling for most of her life, but only recently thought to combine the two. She studied Japanese at University of Texas, and works as a class facilitator. She lives in south Minneapolis with her husband and a small menagerie of pets.

4 responses to “A Step Out of Time in New Orleans”