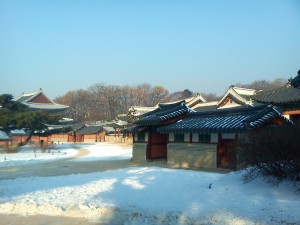 I soaked in the sights as we whizzed by, mostly dazzled by the half-melted snow on the ground. I exhaled out a breath of cold air which fogged up the chilled window of the bus and doodled the word ‘Korea’. I was finally here! The homeland of Korean pop music and Korean food. It was day 1 in Seoul and there was much that came across as strange or unfamiliar to me, namely their winter season. No matter how prepared I thought I was, I was not.

Arriving at the Changdeokgung Palace, our tour group eagerly hopped off the bus. My nose, startled by the sudden attack of coldness, began to water like a leaking faucet. Chills raced up and down my spine, and at that moment I wanted to return to the warm embrace of the heater in the bus. However, I grudgingly followed our tour group as we approached the towering pillars of the palace gates.

We stood at the entrance of the Changdeokgung Palace listening to the enthusiastic dialogue of our equally animated tour guide, recounting the palace’s remarkable history. I was losing interest fast. I was no history buff and had zero interest in attending a history lesson. Time was of the essence here! I wanted to leave and explore famous shopping hotspots. While attempting to distract a grouchy stray cat, I gathered that the Changdeokgung Palace was the most favoured palace of the past Joseon kings. A treasured monument, it was designated to be a UNESCO World Heritage Site in 1997. With that the tour group trooped in and I trailed unwillingly behind, bracing myself for the inevitable.

Stepping in, it was like I just entered a winter wonderland. Powdery snow from a few days ago was sprinkled on the ground like fairy dust. Except the walkways which were cleared of snow for the tourists, the ground was mostly covered in snow. With the massive architecture as the background, I felt as though as I have been transported 600 years back to the Joseon Dynasty during its winter season.

It was a sudden 180 degree attitude change. Craving to know about the history of the palace, I followed closely behind, hanging on to every word. We stopped at the Injeongjeon Throne Hall, it was used to discuss major state affairs between the past kings and the state ministers as well as to receive foreign diplomats. Peering inside, a lone throne remained, surrounded by the dark and drabby interior of the hall. All at once, my imagination started to work its magic. The thin film of dust that covered the throne disappeared; the bright colours that adorned the walls were restored. I saw a bevy of ladies-in-waiting and eunuchs waiting expectantly by the side, silent but alert. The state ministers kneel by the sides in two neat rows, heads bowed in reverence, each slightly jittery. The atmosphere tingled with tension, a frown or a single gesture could mean getting exiled to some godforsaken land or even, decapitation!

I turned to face the large expanse of courtyard, this time I was loyalty. Dreamily, I pictured the large crowd of subjects kneeling before me with utmost deference and slight apprehension, as I descended the stairs like a fairy floating down from Heaven. What an ego boost it gave me! Our next stop was the Seonjeongjeon Hall, it was the Government office for the state ministers where they held daily meetings. Among all the buildings which stood on its own, the Seonjeongjeon Hall stood out exceedingly well, its structure and exterior design was a portrait of brilliance, its vibrant colours and intricate patterns brought life to a seemingly sombre palace environment.

We strode on, often pausing to hurl fresh snow at each other. Our tour group passed the royal family’s private living quarters, each more massive than the previous. Finally stopping in front of a nondescript looking house, its lack of size and colour made it seem like a misfit in the overall majestic grandeur of the palace. With further explanation, it was known to be reserved for the King’s favourite concubine, in an attempt to give her some resemblance of a normal lifestyle. The only irony was the several servants’ quarters surrounding the main house.

Regretfully, our 45 minutes tour in Changdeokgung Palace concluded. As I stood at the entrance from where I entered moments ago, I gazed wistfully around the palace grounds, saddened that the time spent was so fleetingly short. Yet, I was relieved that I could experience this ancient beauty personally, it was beautiful not because of its majestic structure and dynamic colours but it was the beauty of the passing of time that enabled this precious monument to exist today. For this, I felt blessed beyond words.

About the Author: Amanda Jane Yap from Singapore, a student studying for a Diploma in Tourism & Resort Management in a local tertiary institution. Her interests include reading, writing and travelling. She hopes to explore the world before she dies.