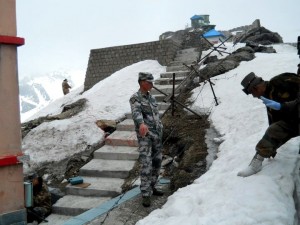 It was a three years back when the summer vacation had already begun, and like every year I took a journey with my parents. In most part of India summer is horrendous and Sikkim provided the promise of a ‘great escape’. Located in the north eastern part of India, is one of the smallest state, but a ‘jewel’ among all the north eastern states.

After a long tiresome when we reach the capital city of Gangtok there was a sense of awe which gulped me. I have visited many popular and quaint hill stations of India. But what was so special about Sikkim? The answer lies in the sacredness of the place. The air brought the sounds of Buddhist prayer bells to the ears, and the smell of momos and thupkas to the nostrils. The small prayer flags of different colours with different scripts can be found swaying with the gentle mountain breeze.

The paradox was stark! On one hand the place lies on the border of China and India (nations that are always at a conflict) and the other hand the place was so serene, calm and peaceful with lowest crime rates. The fall of innumerable, silent springs can be heard at night, as music to the ears. The flowers were not only numerous but also were all huge in size and growth due to the natural fertility of the area. As I stood near the door of my hotel room, I saw the red faced sun rising from the snow capped distant mountains; it was more than just ‘captivating’. It was a ‘visual spirituality’, treat for the soul of a girl raised in crowded and polluted cities.

Our first visit was Nathula Pass. A place where you climb on the a few steps and on the mountain pass you can find yourself standing on the border between India and China (in pic). Many tourists were shaking hands with the Chinese soldiers on the other side. As soldiers from both countries stood almost face to face in minus temperature for days, the humane side becomes visible. It then strikes you that for any country to be safe, there are many a beings; nameless and unknown who sacrifice their ‘all’ so that our lives can be better.

A particular journey that we took in Sikkim was memorable. It’s called the ‘zero point’ located at 15500 feet altitude. As we drove for eight hours on the hairpin roads, it felt like an adventure. Tourists need to halt at Yumthang for the night and visit zero point the next morning. As we reach Yumthang, I realized how far I am from ‘civilization’. The village was surrounded with snows covered mountains from all around and the cold was almost unbearable.

Small hotels dotted the areas to provide minimum lodging and boarding for tourists. We found our cellphones dead since there’s no tower for phones. Electricity was there but voltage was so low that the lights seemed like lanterns. Internet and television is unimaginable. For the first time in my life I lost contact with a mad, wild world out there. All these in a well known tourist stopover! But yes it felt so good, so relieved! As we reached the small lodge, dinner was served, hot rice, dal, and fried beans. The dining hall was dark and there were few candles, everyone in the lodge had dinner together. There was one long table with many chairs. No one knew each other. We were a group of strangers from all over India; yet everyone was passing the dishes to one another and helping each other in serving the food. The cook would bring the hot food stuff in small interval. But due to extreme cold weather, the food would become almost cold as we put it in our mouths! The lodge had little facilities except for minimum food, many blankets and some soaps but the caretakers were warm people who tried their best to serve all with so much care, which was touching. The people who lacked contact from our ‘globalised, civilized world’ are in fact so civilized than most from the ‘other world’. Next morning we visited zero point played all day with snows that shinned like diamonds in the morning sun.

The 2011 earth quake devastated Sikkim and caused most harm to Yumthang. I do not know what happened to that little lodge, the caretaker brother and sister duo, the lovely girl who sold popcorn and clicked a picture with me, and the drivers who were pleasant company on long trips. I hope they all are still safe somewhere as intact as my memories.

About the Author: Abhinita Mohanty: I am pursuing my masters in Sociology from University of Hyderabad. I have a passion for travelling as I believe it teaches you more about life.

Nuh, India: Starry Nights
Delhi: A peep into the history of India
India: Zurviving Zanskar Part 2
Talent behind the Taj