Solstice in the UK 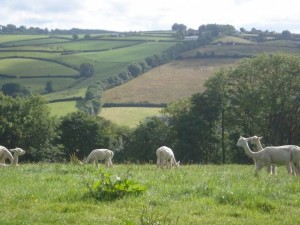 The weekend had crept up on me again and I had forgotten to make plans to do something on my long bucket list before returning to the states. I was studying abroad in London, August to August, and my time was limited. After I left my last afternoon class that Friday, I received a voicemail from Steve. This was interesting in itself because Steve liked to live off the grid. It was very hard to track him down between thi chi classes and drafting a new manuscript.

Steve invited me to Exter, a small city inside the county of Deven for a friend’s summer solstice party. As he put it “they have an alpaca farm, a barn, and there will be lots of food”. At first I was inclined to say no. Not because it didn’t sound fun, but because it sounded like such a hassle. Packing, getting a bus ticket, the long 5 hour bus ride, was it worth it?

I decided that even though I had been living in England for almost a year, I had really been living in London. I had not taken many opportunities to travel to lesser-known parts of the country. By dinner time I had my bag packed, a new sleeping bag, and I was on my way.

Once outside the city limits, the countryside started to look like a cookie sheet with odd shaped squares lined with stones and trees. The hills stretched and rolled, longer and longer until the sun started setting meekly into the distance. The bus stopped at the Exter bus station and it was eerily quiet. The evening mist was descending on the city and there was hardly anyone around. I sighed and smiled when I saw Steve pull up with a friend. “I’m so glad you could make it!”

The car bumped along the road that became narrower and bumpier the farther we got away from city center. We rounded the corner and pulled onto a gravel path leading up to the barn. They had strung lights from every corner of the barn and flags hung over the entrance. The music had already started.

I grabbed a fizzy elderberry drink and headed towards the food. Country fare mostly, cheeses and homemade chutneys, crusty bread, and cured meats. There was so much dancing! Some people were dressed in silly costumes and lighting sparklers. A few party-goers started a bon-fire by the barn and were telling stories, laughing, while reaching for cardigans and sweaters. Most of the people were locals or former locals who were now living in London and elsewhere. It was a homecoming of sorts, people catching up on each other’s lives, reconnecting, reminding each other of past ventures and jokes.

I was a fly on the wall, chatting, but mostly watching the evening unfold. After I had eaten my share, heard many stories, and listened to the folk band weld songs from collections old and new, I retreated to my tent in the field. Even though it was June, the grass was wet with dew and my toes were gladly covered in socks. I slept to the sound of laughing drifting into the valley past the farm.

In the morning, I heard shuffling outside my tent. I peeked out to see the alpacas sauntering into the field for their early morning grassing. I rubbed my eyes, pulled my jumper over my head, and walked into the field. I tried to get close to them, but they were hungry and had no interest in my distractions.

It was then, looking over the fields under the horizon, that I realized I had been invited to see something private, something sacred. Not just a welcoming of summer, but a window into the lives of people who have roots here. Not the transient student population in London, but real people, real friendships, relationships that held depth.
Steve brought me coffee and we watched the alpacas munch on their breakfasts. I thanked him for inviting me; he shrugged as if to say “of course”. Others were still sleeping in their tents as I started to pack my things. I grabbed a rosemary scone from the farm house and stole one more look at the serine view of the barn. On the ride back to London, before I drifted off for a nap, I realized this adventure wasn’t about the bucket list and all the main attractions. This adventure was about seeing a glimpse of the real England I had been searching for.

About the Author: Natalie Cowart received her BA in Creative Writing from the Florida State University. She now teaches and writes in Charlotte, North Carolina.

From Deadlines to Donkey Dung in France
Morocco: Saha صحة
Working together in Kenya!
Nigeria: Almajiris Up North