Sláinte mhaith: To good health and an unforgettable St. Patrick’s! 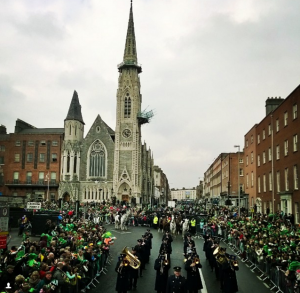 Green beer and funny hats aside, what makes Dublin the place to be on St. Patrick’s? The multitude of traditions, preserved and revered, that you won’t find anywhere else in the world. Lisa’s trip in 2015 took her through some of the most Irish faces and places.

Ireland stands at 6th place for global beer consumption and it’s all in the history. By the end of the 18th century, Dublin’s River Liffey was lined by 12 different breweries; one of the largest being Guinness. By the 1800s brewing had prospered so much that Ireland was exporting more beer to England than it imported. Over the centuries, large-quantity producers took the scene and micro-breweries didn’t start popping up in Dublin until the 1990s. Guinness remains a house-hold name with its unique brewing process involving roasted un-malted barley and mixing beer with nitrogen for an extra malty texture.

What else can you sip if beer just isn’t your thing? Whiskey! it doesn’t get much more traditional than a glass of gold by the fire. Whiskey itself means “water of life” so you’ll understand the historical significance. It’s believed that the tradition began with Irish monks bringing back Mediterranean techniques for distilling perfumes which were then modified to create something palatable. There are only a few remaining whiskey distilleries left in the country but with an upsurge of the spirit’s global popularity more are coming into light.

Go into any Irish pub and chances are you’ll be treated to a tune or two. Irish music began as an oral tradition passed through generations by solely listening; this practice is still common-place among some Irish music students. Trad came into being through the Celts roughly 2,000 years ago with the fiddle, harp and bodrhán remaining integral parts to this day. The dancing which accompanies trad is just as entertaining and they likely grew side-by-side. Dances are divided into “social” and “performance” then further into “Ceílí” and “Set.” Where’s a great place to see them in action? Perhaps the Guinness Storehouse on St. Patrick’s Day!

If upbeat, foot-stomping music is sounding like a bit much, the Catholic cathedrals of Dublin offer a softer alternative. Church choirs, especially those at St. Patrick’s cathedral are a huge draw for tourists and locals alike.

Who can say Ireland isn’t proud of its history? Everywhere you turn, there are homages to the past. A must-see historical site is Newgrange, with its impressive title of “older than the Pyramids.” This UNESCO-protected heritage site was first built in 3,200 BC with excavations beginning in 1962. Want to see it during Winter Solstice? Put your name in the lottery and hope to be one of the lucky ones!

Anytime of year is perfect for visiting the Emerald Isle; but on St. Patrick’s Day there’s no better place to enjoy age-old traditions, a simple pint and perhaps a colorful parade or two!

Lisa says: “Many thanks to the Guinness Storehouse, the Brooks Hotel and Brendan Vacations for an incredible first visit to both Dublin and Ireland!” See all 14 of Lisa’s Ireland videos of all her adventures here:

2 responses to “Sláinte mhaith: To good health and an unforgettable St. Patrick’s!”