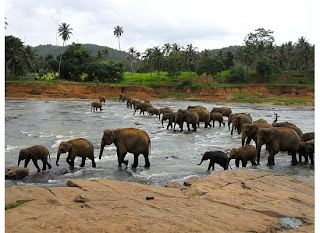 For this teardrop shaped country with a landmass of relatively small size, Sri Lanka boasts diverse flora and fauna over 14 principle national parks and reserves.  Of these locations, the following are worthy to view wildlife: Bundala, Gal Oya, Kaudulla, Minneriya, Sinharaja Forest reserve, Uda Walawe, Wasgomuwa, Wilpattu, and finally Yala, probably the best known and most visited safari location in the entire country.  Of these remaining nine reserves, only a handful will be accessible due to either the time of year and corresponding climate or the sheer difficulty and time required to reach certain locations.

During our visit from June 19th through August 2nd, 2010, we had the opportunity to visit three of the national parks listed above.  Actually, our first elephant viewing came while we were traveling in a local bus from Negombo to Kandy.  The elephant was clothed and was being marched down the road, probably to one of the many festivals that are held across the country these time of year.  After we arrived in Kandy and walked down to the lake area later that same day, we had our second elephant sighting, elephants and costumed dancers were parading down the streets celebrating Poya, a full moon holiday.  In fact, we later learned that elephants were included in all celebrations, most notably at Kataragama where symbolically, God is placed in an altar and as the locals claim, He is led while perched atop the elephant to visit his girlfriend.  Even God needs love sometimes, if only once per year as in this case! 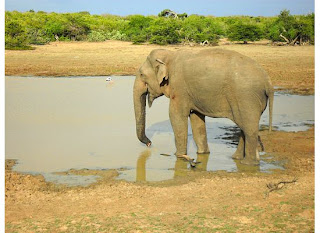 At this point, we had no firm plans to go on a safari while in Sri Lanka but while we were in Kandy, we decided to visit probably the most touristy places in all of Sri Lanka, the Pinnewala Elephant Orphanage.  The government run operation is a great place to view about 80 elephants in a setting that has a brilliant backdrop that could be right out of Africa.
However, we have serious concerns regarding this project that was supposedly created to protect abandoned elephants.  The mahouts seemed at times somewhat vicious toward the elephants.  These elephants were forced to gather in areas near the tourist viewing points as the mahouts used sharp prodding sticks to ensure that the group remained in a certain radius.  Even more restrictive than the aforementioned is how we saw them chained in rows during feeding time.  I could not help but question the validity and the status of this “orphanage” and wondered if these creatures would not be far better off if left to live out their lives in one of the many national parks located throughout the country.  It was roughly  two more weeks before we would see the difference between these orphaned elephants and their free bretheren located in the national park system.
The Ups & Downs of Bundala and Yala National Parks
From Tissamaharama located in the southeast portion of the country, both Bundala and Yala national parks are easily accessible where day tours can be arranged with a variety of tour operators.  Unfortunately, the town locally known as “Tissa” has nothing much to hold the traveler other than Tissa Wewa (a water tank) and a large white dagoba standing almost 56 meters high.  We checked into Hotel Tissa and arranged an evening tour to Bundala National Park that evening and an early morning departure at 4:45am to Yala the following morning.  As far as accommodation, we recommend the Traveler’s Home located up the road and about 1.5 kilometers out of town instead due to a more relaxed atmosphere surrounded by rice paddies.

As we took off to visit Bundala, we did not have high expectations as Yala is touted as the national park of national parks in the country.  We were told that we would see some birds and crocodiles but that there was not much else to be seen unless we were lucky, and lucky we were.  In our jeep we passed through a remote and beautiful landscape with an interweaving group of waterways and lagoons that are home to a diverse group of 150 species of birds within the 62-sq-km area of the park.  The tracker pointed out a variety of birds and crocodiles as we slowly traversed the glimmering landscape.  The sand dunes abut the Indian Ocean at a lovely virgin coastal area with only one structure, a fisherman’s shack.  Upon our return, we were stunned to see a lone ten-year-old male elephant pass through the brush quite close to us.  We following the elephant to a watering hole where we watched it drink water for almost fifteen minutes, close enough to almost reach out and pet the great grey mammal.

The next morning we awoke at the crack of dawn and after waiting in a line or jeeps to enter Yala National Park, we proceeded to race around for seemingly hours in search of the ever illusive leopards who we would find either in trees or on one of a few rock formations.  As the sun came up, it became evident that we would not see the early morning large cats in the typical spots. We stopped for a rest near a river, still not having seen one major mammal with the exception of approximately 70 jeeps filled with local and international tourists.  In comparison, at Bundala the previous afternoon, we saw only two or three jeeps the entire safari.  At one point out tracker and driver heard that a leopard was spotted in a tree at a certain distant location.  We shot through the park and arrived to a location of where a dozen jeeps crowded together in huddle formation to few a leopard that was at least invisible to the naked eye.  Our driver finally gave up on the leopard hunt and began a more leisurely pace.  Yala is much larger yet not as pretty as Bundala.  There are more paths here and less waterways.  The overall landscape is more arid and desert like.  To be fair, we did see some wild boar and sambar deer in a couple of locations.   As the heat began to weigh upon us, the sun in our glinting eyes, we saw an elephant in the far distance, too far to take a quality photo without a 400-600mm lens.  Disappointed and tired due to the early awakening hour, we returned to Tissa and packed our bags. 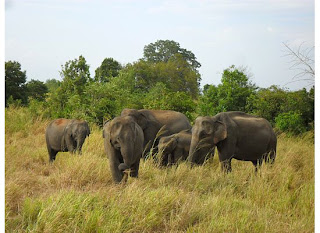 From the stupendous beaches of Marakolliya just outside of Tangalla, we travelled via local bus to Embilipitiya, a town good as a base to the Uda Walawe National Park, but not much else.  We checked into a cabin at the Sarathchandra Tourist Guest House and arranged an afternoon tour.  As our tracker entered the jeep, it was a good omen that he felt that Uda Walawe was superior to Yala due to the famous herds of elephants that roam the park’s 30,821 hectares.  And at least for us, this was an amazing place to see elephants.  After passing quite a large area that was burnt down only a few days earlier by a burning cigarette, we entered the park center where we saw some sambar deer.  We then viewed an isolated male elephant at close range near a watering hole, though not as isolated or as close range as we had seen in Bundala.  Our driver and tracker slowly pointed out birds and crocodiles as we traversed the park’s abundant flora.  Then quite suddenly, as we went around a bend, we came across two herds of wild elephants, living off nature in a tranquil state, the place where elephants are meant to be, their home. 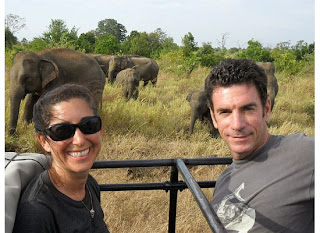 And so my wife Lisa and I were redeemed by the famous elephant herds of Uda Walawe, one of the many great locations that we would both recommend across Sri Lanka.  This country is now a land of friendly people who are truly happy that 30 years of civil war has come to an end and that both Tamils and tourists travel freely throughout their country

Without a doubt, Sri Lanka has far more to offer than elephant safaris.  Apart from the great people, lovely beaches, ancient ruins, tea plantations, colorful festivals and stunning natural scenery, there are elephant safaris, the best of the lot Uda Walawe.

Happy 85th Birthday Gloria Steinem!
Thank you Authority Magazine: "How I Turned My Hobby Into A Career"
Want to Pet a Hippo? I did at the Los Angeles Zoo & You can too!
Thank you! My YouTube channel is now 1,250,000 views!