Skiing In Austria with the Family

By Family on the Loose 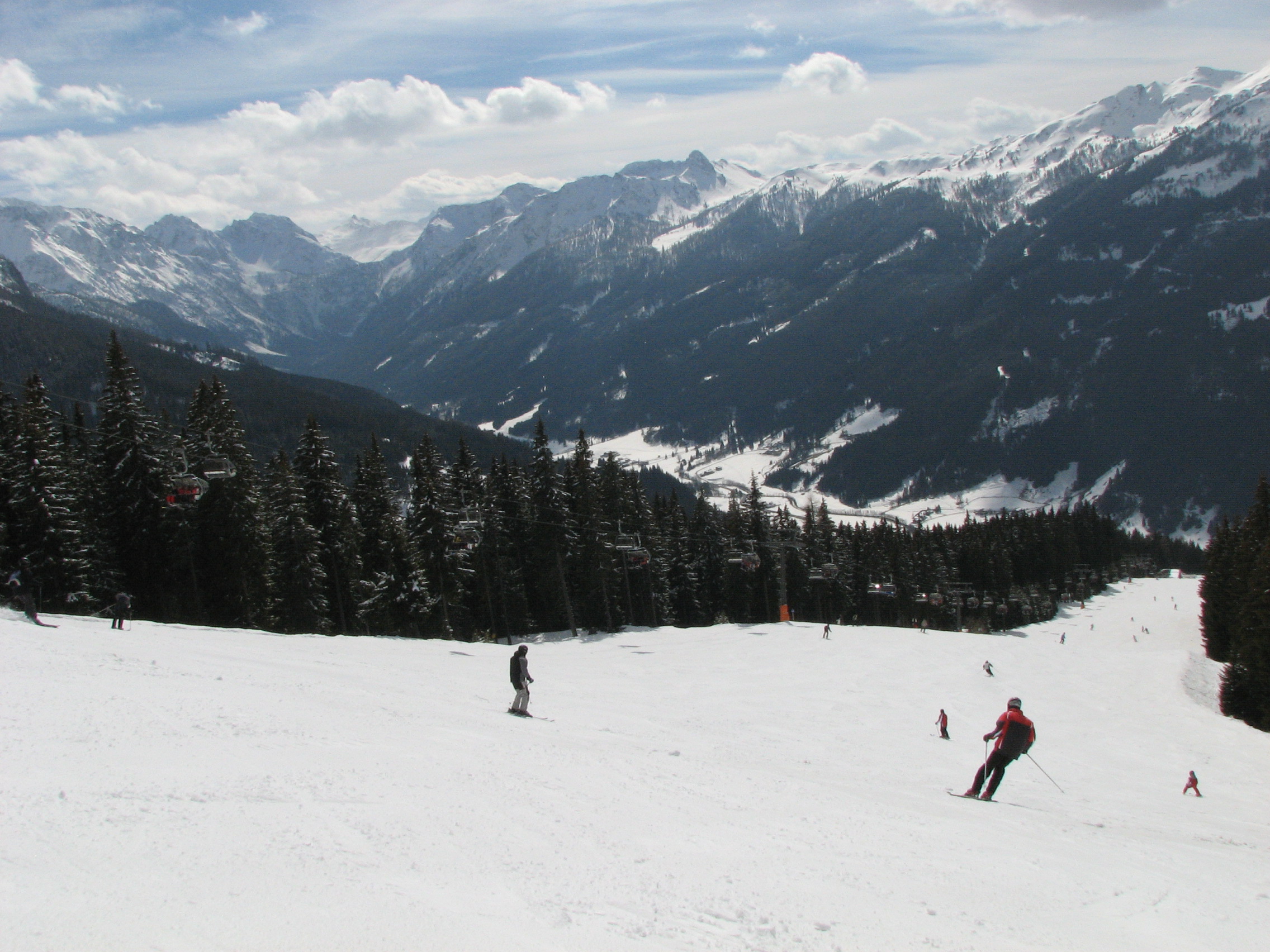 I didn’t really know that much about skiing in Austria before we went. I knew that Austria regularly produces some of the best ski racers in world, that they hosted the winter Olympics sometime in my youth, and that the Alps have some of the best skiing anywhere. I was going as part of a family, however, taking my wife and two kids in search of a good combination of learning to enjoy winter in the outdoors, fun ski runs for four levels of skiers, and enjoyable cultural immersion into small town Austrian life. Here is what I learned.

Ski Equipment. Being telemark skiers, my wife and I brought our ski equipment from home, not being confident that we would find anything to rent. The kids, however, were easily able to rent good alpine equipment wherever we skied. Renting for a week of skiing was easier and cheaper than daily rentals, mainly because we spent relatively less time dealing with it. 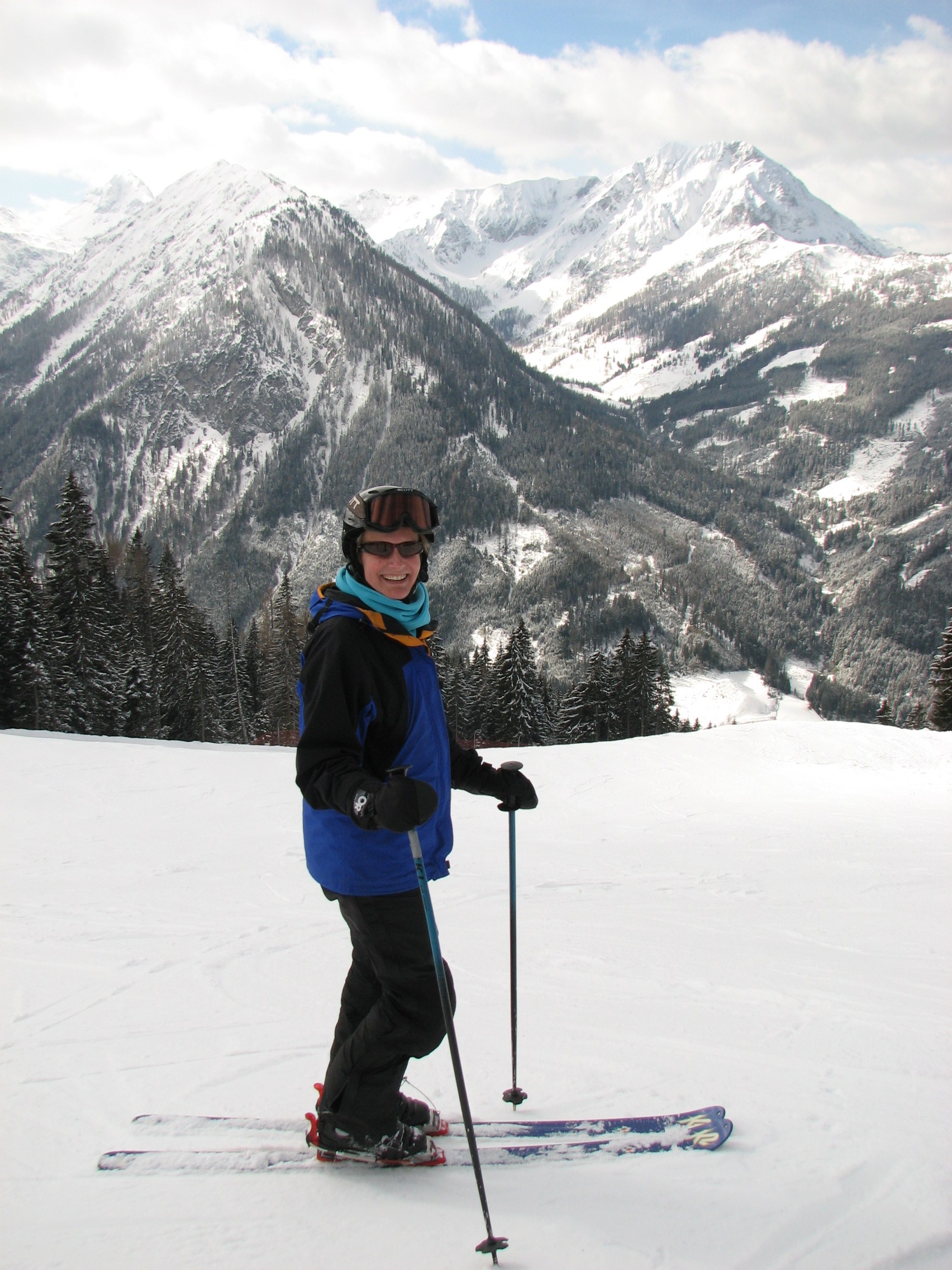 Ski Passes. I guess this isn’t too different from home, where differences in marketing strategies and advances in technology makes the process of buying and using a ski pass almost unique to each ski area. But figuring out the best option for me and my family in German certainly provided an additional wrinkle. One area offered to charge either by the day or by the run. One got exponentially cheaper as the week went on, so that we were almost skiing for free by the sixth day. And one sold lift tickets in kiosks in the middle of the road at the valley bottom, far from the snow and the ability to determine the conditions first hand (it turned out to be a powder day).

From Vienna. Vienna lies in the lowlands east of the Alps, with a few skiing options for daytrips. Without a car and desperate for some turns, I figured out how to take the train to Semmering to ski at Stuhleck. I felt pretty cool at the beginning of my journey, as the only person carrying skis on an early-morning subway ride to the train station. I was happy not to have my kids in tow, being weighted down nicely with only my own ski equipment. It took a couple of hours to get there and the conditions were pretty good considering its relative low elevation. It was not the most epic skiing adventure but I managed to sate the urge. On an earlier visit with family and friends, made by car instead of train, the area made for a great family ski experience.

Linked Ski Areas. The Ski Amade region south of Salzburg encompasses a network of 28 ski areas with 860 km of downhill slopes and 278 ski lifts, all accessed with one lift ticket! And the ski areas are often right next to each other allowing for some creative trail-finding options, including skiing from town to town. One day we left the kids in ski school and tried to see how far we could get and still make it back by their mid-afternoon pick-up time. We ended up two valleys away for lunch, only having taken a one short free shuttle between lift rides and skiing. It was a great sunny day adventure. 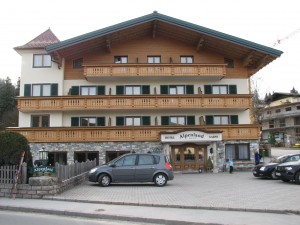 Lodging. We spent a week at Altenmarkt (the home of Atomic skis) skiing at Zauchensee, part of the Ski Amade region. We stayed at a small traditional hotel within walking distance of downtown. The traditional clothes of the staff in the pictures on their website were not costumes as much as the clothes they wear everyday. The place was clean and beautiful, had a family room on the top floor where all four us could sleep comfortably, and had an awesome buffet breakfast every morning of assorted meats, cheeses, breads, fruit, and muesli. Like most ski towns it wasn’t exactly cheap, but it wasn’t crazy expensive either. And the ski shuttle stopped just up the street. 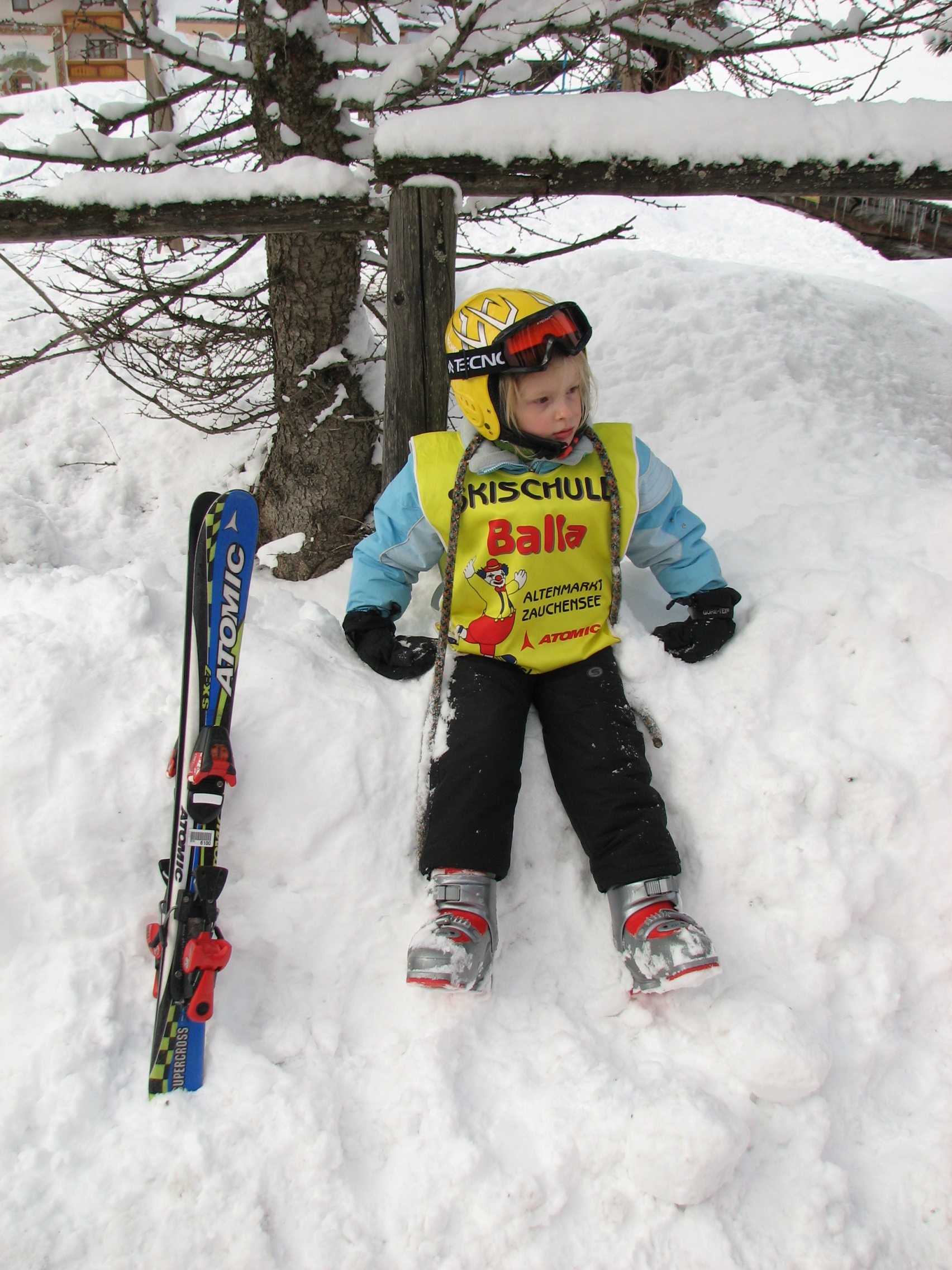 Kids’ Ski School. What better place to learn to ski than the center of the skiing universe? We expected the kids to be in ski school for a couple of days and then want to spend more time skiing with us. But once they met their instructors and got into their ski groups, they preferred to be with their friends. Being taught in German didn’t seem to be a problem. We met them most days for lunch and had enough time to do a couple of runs with them at the end of each day. Their favorite time was “Gummi Bäre Pausa,” when the instructor stopped them on the hill and then skied slowly past, popping gummy bears into their mouths as a reward and for some sugar energy. And they tried racing gates for the first time. Like with lift tickets, ski school got exponentially cheaper the more days they stayed. Don’t expect to sign any liability waivers. When asked to assuage our safety concerns, the head of the ski school simply said that the mountain can be a dangerous place and skied away.

Lift Lines. The first time another skier tried to squeeze between me and my kids as we waited to get on a lift I was a little put off. But then I noticed that no one bothered to formally queue up and it was almost like buying a ticket in the Delhi train station. I learned to stick my elbows out as a deterrent to line busters, and to not get too bent out of shape by people periodically stepping on my skis. 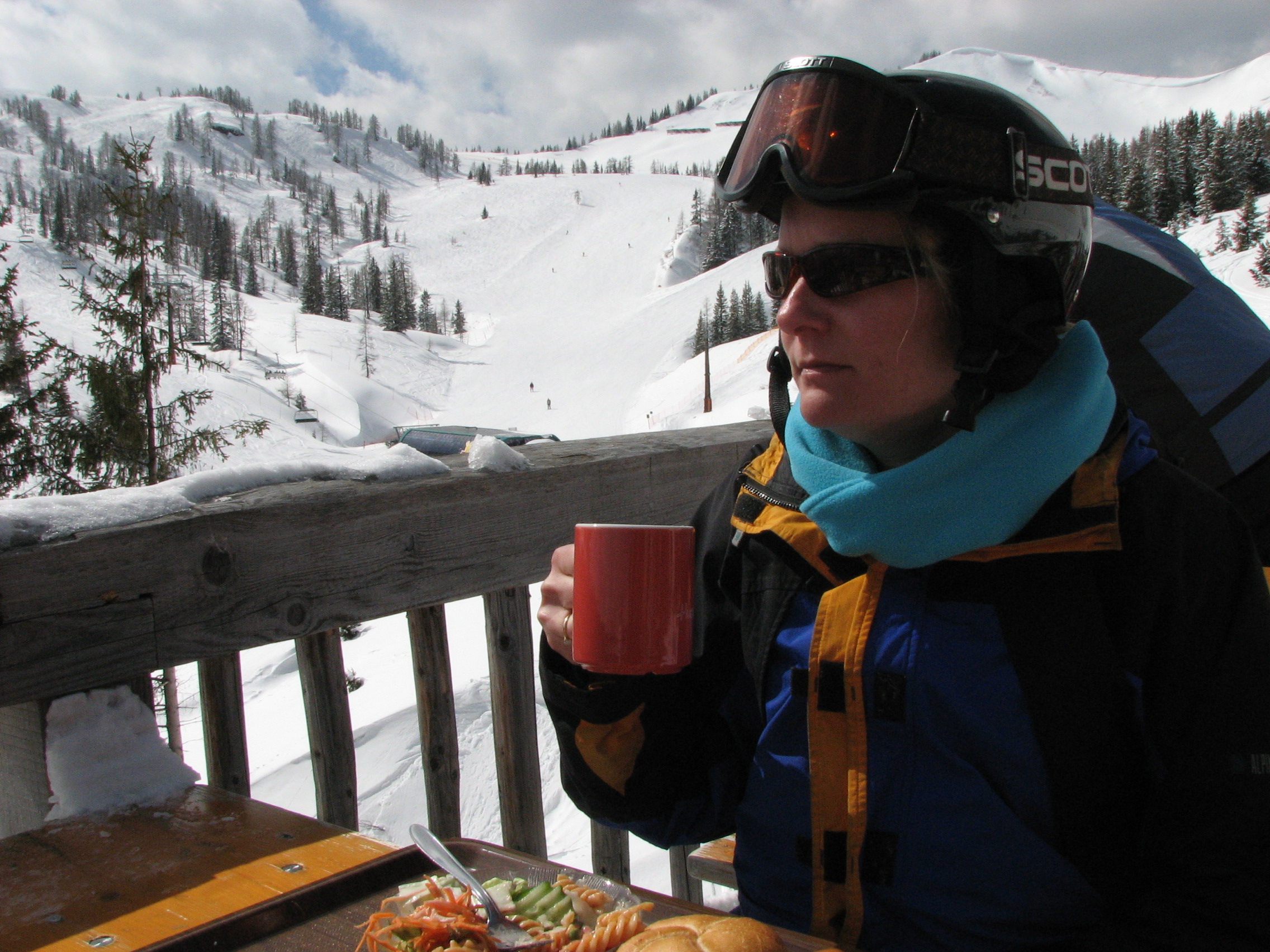 Ski Lunch. Austrian ski areas are typically a collection of many small businesses instead of a corporate machine. There are privately run chalets all over the mountains selling food and sometimes lodging. My typical lunch was a “käsekrainer und Almdudler.” It is difficult to separate alcohol consumption from the ski experience anywhere, and I usually save it for the après portion of the day. But this is not typically true in Austria, where it is never too early for “ein grosse bier und wein spritzer.” I did succumb to an impulse buy of a small bottle of Jaigermeister at the ski pass kiosk and it has since become a minor but regular player in my après experience.

Groomed Goodness. Nothing against the grooming crews at the ski areas back home in the Pacific Northwest, but the grooming of the ski runs at the four areas we skied in Austria was impeccable. Maybe it was a function of the weather while we were there, or the fact that they can open for business with as little as 30 cm of snow, but there was some amazing corduroy out there, even on some pretty challenging steep runs. It made for some pretty speedy fun.

Off-piste. Three storms came through the week we were at Altenmarkt, bringing lots of fresh snow. As good as the grooming was, the powder skiing opportunities were even better. Gloriously, Austrians don’t typically seem to enjoy the off-piste conditions. Even after lunch, I was able to break trail on an as-yet unskied ridge. Pure skiing pleasure! 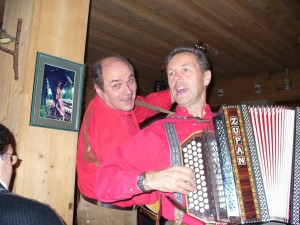 Après Ski. My time of skiing all day and partying all night have long since passed if they happened at all. As a family, we were much more interested in a nice meal and learning about Austrian culture. Over the week, we visited many of the gasthofs in Altenmarkt, where traditional dinners were the main fare. We did venture up valley one afternoon to hit Wasserwelt (or waterworld) and relax in the hot tubs and waterslides. Our hotel also ran an on-mountain chalet where they hosted evening dinner parties complete with live accordion music. Maybe thankfully, the toboggan ride back down in the dark was cancelled for lack of snow.

All said and done, I’ve got to admit that I need a much larger sample size to make this article more scientifically sound. I volunteer to take my family to as many ski areas in Austria as I can over the next couple of winters. Any sponsors?

Bill Richards writes about traveling with kids at www.familyontheloose.com and is co-author of a brand new book, “Family on the Loose: The Art of Traveling with Kids” available at http://bit.ly/RPzxCd.

48 Hours in Portland
Love to Travel By Boat? Sailing Through History
A Perfect Storm in the Sea of Cortez
What Three Travel Items Can You Not Live Without?

One response to “Skiing In Austria with the Family”