Aquincum – The Roman Ruins of Budapest 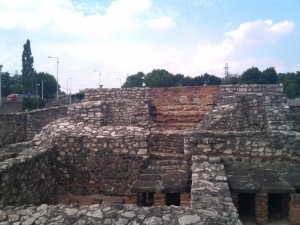 The capital of Hungary, Budapest, conjures images of a cruise on the Danube, wine tasting, spicy foods, Sziget Festival and thermal baths, sprinkled with historical places such as the Fishermen’s Bastion. But few travelers know that, not very far from the very well-known sites of Budapest, there is an interesting Roman gem, waiting to be discovered.

Yes, you’ve read correctly. Budapest is home to the ruins of ancient Aquincum , an important town in the Roman province of Pannonia. Before the Huns took over the region, the Romans have settled here between the 1st and the 5th century.

Personally I didn’t even know about this site until my trip to Budapest in July 2011. My husband, knowing my fascination for archeological sites, suggested we should plan a visit. And we did. In the middle of summer, in scorching heat, we had the site to ourselves.

For me, visiting Aquincum set the theme for our next travels. Within two years, we have visited Rome with its Roman Forum and Coliseum, Greece with its Roman Agora , Greek Agora and Acropolis, Romania with its Ulpia Traiana Sarmizegetusa… but it’s always the Aquincum which holds a special place in my heart.

A little bit of history

Emperor Vespasian established a military camp in Pannonia by the mid 1st century BCE which helped the city grow. The easy of crossing the Danube at that point and also the fertile planes helped the area to grow as well.

In 106, Emperor Trajan made Aquincum the capital of Lower Pannonia (Pannonia Inferior) and it only mean the area was about the develop further. In early 2nd century a Roman legion was stationed here and the city was classed as a municipium by Hadrian in 124. In 194, Septimus Severus classed it as colonia. Later, Emperor Diocletian made Aquincum the capital of Pannonia Valeria.

But the great migrations started to pose a threat and the citizens gradually withdrew from Aquincum. When the Huns arrives in the 5th century , they found it deserted. 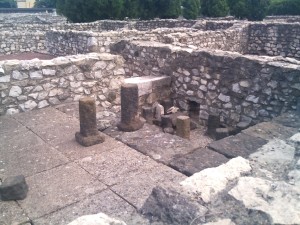 In the 19th century, the site was gradually excavated – work is still going on in present days. The remains are extensive and there is also a museum on site. The archeological park is not open between November 1 and April 14.

The site comprises the remains of an amphitheater, mosaic floors, tombstones and statues.

The best thing about Aquincum is that you can walk pretty much anywhere – of course, there are areas which are perilous and therefore close to the public – and there is enough throughout the site so that you know what you are looking at.

I have made the mistake to visit the site right smack during a very hot summer day. Please don’t do the same. Plan for a morning stroll. Wear good walking shoes and don’t forget the bottled water. Since the archeological park is only open between mid-April and late October, chances are the weather will be hotter rather than colder.

How to get to

Aquincum is located in the oldest part of Buda (Obuda). Take the HEV from Batthyany ter (a stop on M2 line) all the way to Aquincum stop.

All photos by Traveling Cricket and may not be used without permission.

Top Seven places to get Engaged this Christmas!
How I used basketball skills in a Chinese hospital
Dominican Republic: 27th Biennial of Visual Art
Planning a TOURific Summer